Home » Lifestyle » Can you tell which son was breastfed and which was reared on formula?

Can you tell which son was breastfed and which was reared on formula? A mother-of-three has shared a photo of her two ‘perfectly proportioned’ sons to challenge the claim that babies given formula instead of breast milk are more likely to become obese.

Sam Clarkson, 46, a childminder from Lancashire, posted the snap on the This Morning Facebook group after watching a discussion on the ITV show on Tuesday.

A report earlier this week stated that children never given breast milk have 25 per cent higher odds of obesity than those whose mothers exclusively breastfed them for at least six months.

Sam asked fellow Facebook users to guess which of her two sons – Harry, 21, and Noah, 16 – was bottle-fed with formula and which was breastfed. 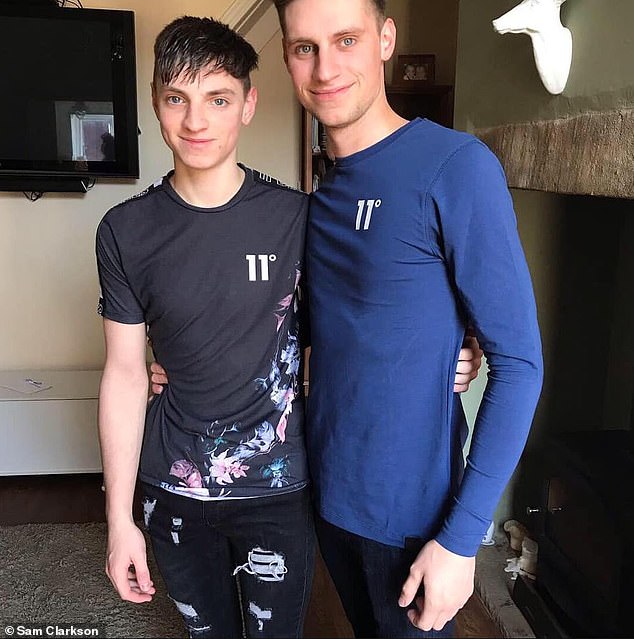 Sam Clarkson, 46, a childminder from Lancashire, posted this photo of her two sons Harry, 21, (right) and Noah, 16, (left) on the This Morning Facebook group, asking people to guess which one was reared on baby formula rather than breast milk

She captioned the post: ‘I breastfed one of my boys and bottle-fed the other. Both are perfectly proportioned and definitely not overweight.

‘You tell me which was fed formula. Fed is best and I’m fed up of the powers that be (whoever they are) stigmatising parents that bottle feed their children.

‘Give it a rest and let the parents, who know what’s best for their families, decide for themselves without shaming them.’

Her post notched up more than 800 likes and dozens of comments, igniting a heated debate over the issue. 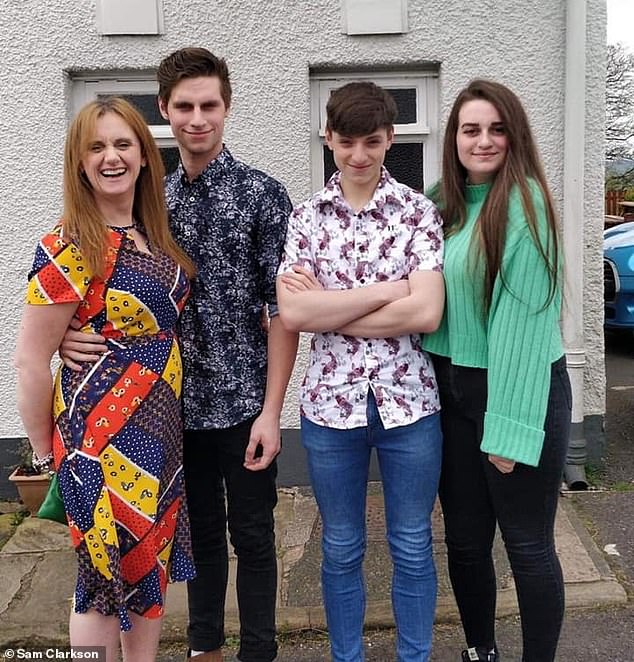 Mum Sam, pictured on Mother’s Day with Harry, Noah and her daughter Rebekah, 24, aid she wanted to share the picture because she is ‘fed up of the powers that be shaming parents’ 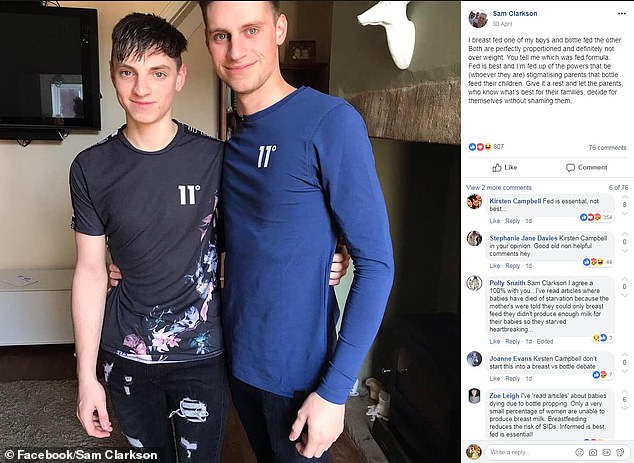 Her post notched up more than 800 likes and dozens of comments, igniting a heated debate over the issue

It turns out that Harry – the taller of the two, who has a size 28 waist and wears small to medium size tops – was fed using formula, after Sam struggled to breastfeed him.

She told FEMAIL: ‘My daughter Rebekah (24) and was bottle fed – I tried breastfeeding her, but she just gave me love bite-type bruises.

‘I wasn’t supported – I asked for help from midwives but they didn’t have the time.

‘I breastfed Harry for two days but I stopped because Rebekah got very jealous and I felt guilty. 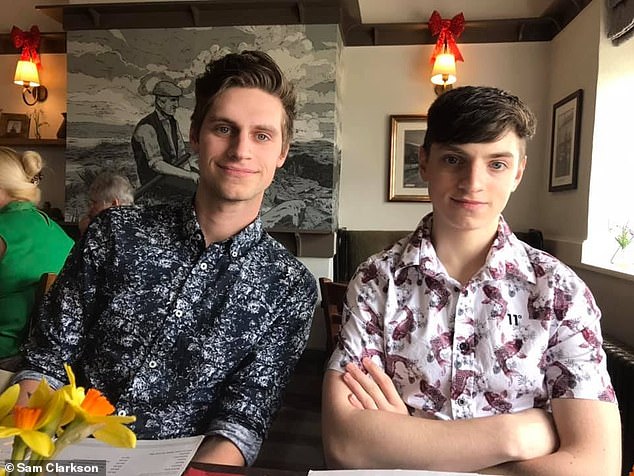 Harry, pictured left, is the taller of the two brothers and has a size 28 waist and wears small to medium size tops 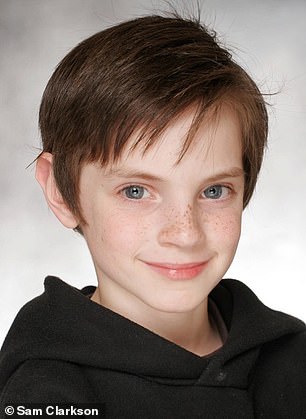 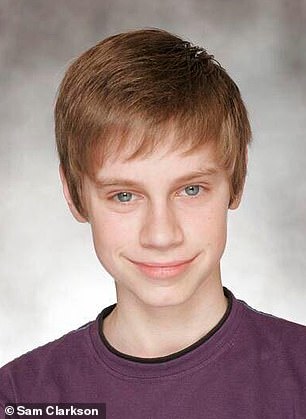 ‘Noah was my last chance for a breastfed baby. I was 30 – there are eight years between my eldest and my youngest – so I insisted I got support.’

Sam, who is married to Dean, who works for a pipeline coating company, said she ‘wasn’t shy’ about where she fed Noah and continued to breastfeed until he was four months old, when he ‘naturally got fed up’ of her.

‘It broke my heart,’ she said. ‘I was ill with mastitis during it, and sleep-deprived, so it was a double-edged sword – devastation that he didn’t want me, and relief that his dad could take over and I could finally get some kip!’ 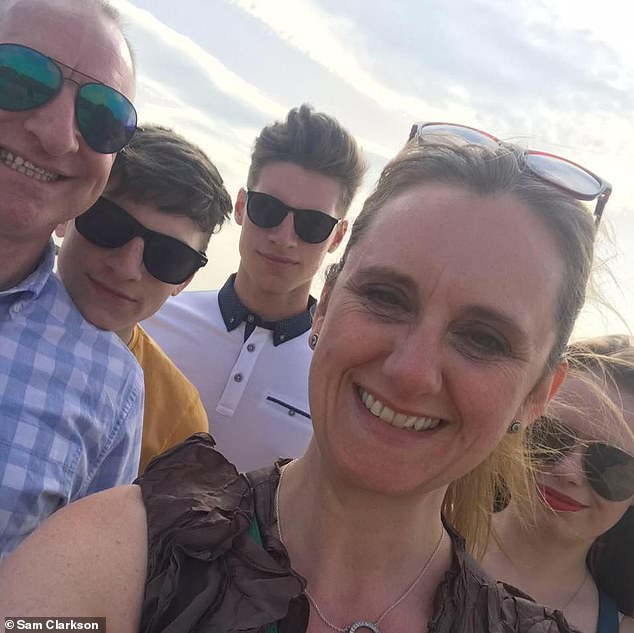 Sam, pictured front centre, who is married to Dean, left, said she ‘wasn’t shy’ about where she fed Noah and continued to breastfeed until he was four months old. Also pictured are Rebekah, right, and Harry, back centre

Explaining her decision to speak out on the issue on social media, Sam said she wanted to share the picture because she is ‘fed up of “the powers that be” shaming parents’.

‘Most responsible parents will know what is best for their situation, finances and time constraints,’ she told FEMAIL.

‘Let us parent our kids without being told you’re doing it wrong – one size does not fit all. 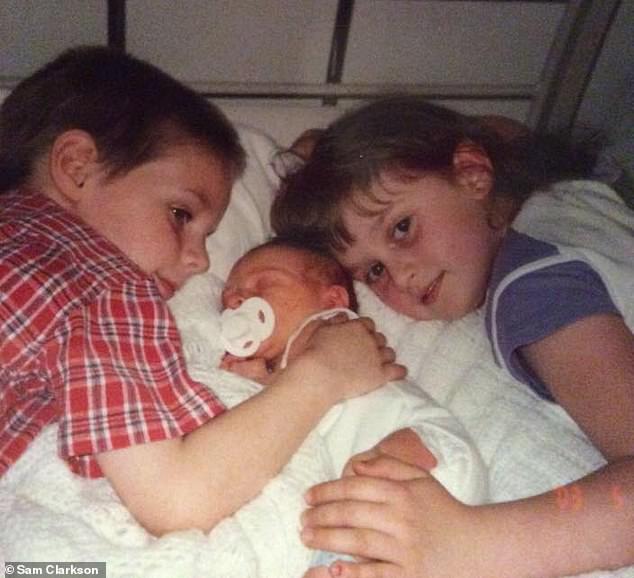 Noah, pictured on the day he was born with siblings Harry and Rebekah, was breastfed until he was four months old, at which point he got ‘fed up’

‘Lots of other environmental issues also contribute to childhood obesity, such as the change from tax credits to universal credits and the rise in the number of people having to rely on food banks.

‘Processed food is so much cheaper than fresh fruit, veg and meat, and then there’s the problem of unhealthy takeaways positioned outside schools.’

Many mums on Facebook shared Sam’s view. One commented: ‘I agree a 100 per cent with you. I’ve read articles where babies have died of starvation because the mothers were told they could only breastfeed. They didn’t produce enough milk for their babies so they starved, heartbreaking.’ 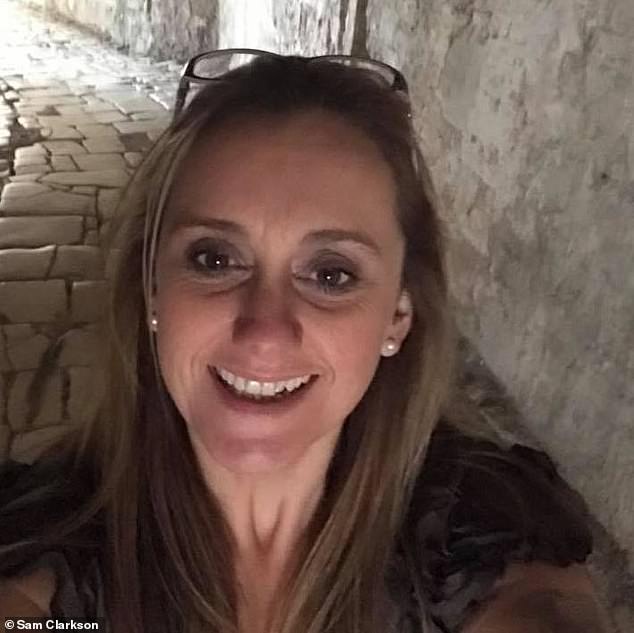 Speaking about the reaction to her post, Sam said it was ‘nice to see some solidarity between us mums’

Another wrote: ‘I breastfed my oldest for eight months, I had so much milk unfortunately I needed to stop at that age. Then I had my second and I tried and tried [but] there was not a chance my boy wanted to be breastfed, I cried so much about it.

‘My second one [has] never ever been poorly or anything. And he is not overweight at all. He is so skinny.’

And one added: ‘I bottle fed all of my kids and none of them are overweight. At the end of the day everybody does things their own way, and for some mums they have no choice but to bottle feed! 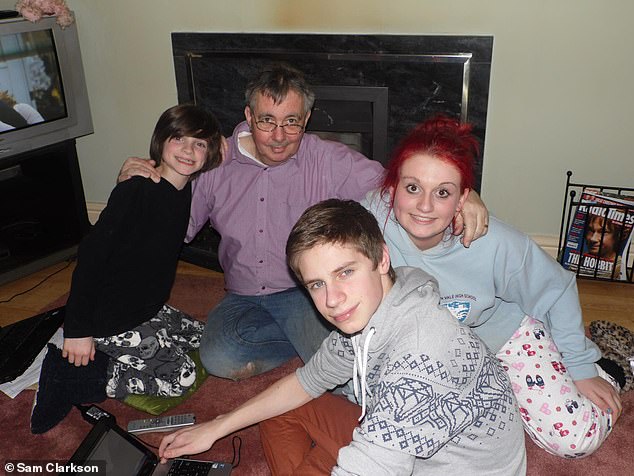 ‘Besides it’s not all down to bottle or breastfeeding that determines what size your child is going to be in the long run, many other factors come into play too.’

Speaking about the reaction to her post, Sam said: ‘I get the general feeling that parents want to make an individual decision on how they feed their children.

‘As long as their children are fit, healthy and thriving then it doesn’t matter what anyone else says.

‘Parents are doing their best and it’s nice to see some solidarity between us mums.’ 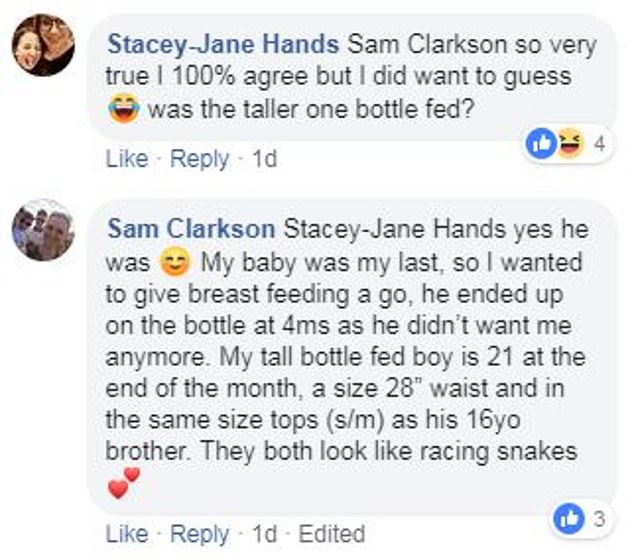 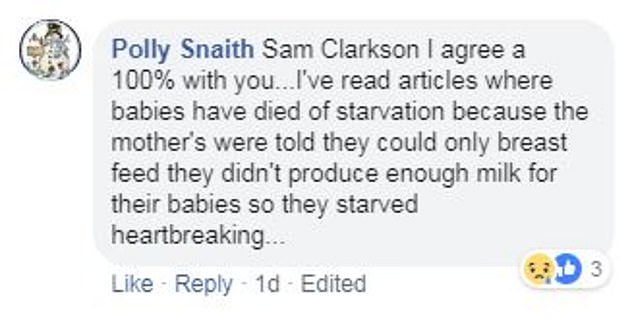 Many mums engaged with her post and shared her point of view, arguing it should be left up to the parents to decide what’s best for their children

Almost one in six bottle-fed babies are obese by the time they reach primary school, an international study of more than 100,000 six to nine-year-olds found.

Children never given breast milk have 25 per cent higher odds of obesity than those whose mothers exclusively breastfed them for at least six months.

Experts believe formula may cause babies to gain more weight and grow faster because it is developed from cows’ milk, which has higher levels of protein and may trigger the growth of fat cells.

Despite this, only around one per cent of mothers in Britain breastfeed their child for at least six months without using a bottle, the latest figures show.

The study, led by the National Institute of Health in Portugal and promoted by the World Health Organisation, looked at breastfeeding rates for up to 22 countries, finding even nursing babies for some of the time may protect them from obesity. The UK was not included.

Children of mothers who breastfed them for at least six months, but used bottles as well, were 22 per cent less likely to be obese than those never breastfed.