Defence Minister Linda Reynolds could be forced to front a Senate estimates hearing next month to answer questions over the build of Australia’s $90 billion submarine fleet after the Morrison government and Naval Group reached a critical deal on the project.

The government and the French company announced on Tuesday they have reached a formal agreement, which has not been publicly released, to spend at least 60 per cent of the submarine program in Australia. 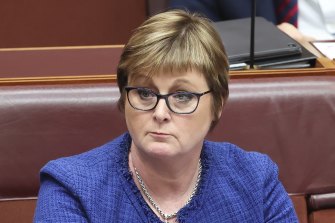 Defence Minister Linda Reynolds is due to return to work after April 2.Credit:Alex Ellinghausen

Labor will now push for Senator Reynolds, who is on leave this week as the submarine project is due to be scrutinised in Senate estimates, to front a spillover hearing after she returns after April 2.

The new agreement follows more than 12 months of mounting concern about whether Naval Group would meet its local content requirements under the biggest defence contract in Australia’s history.

The strategic partnership agreement will now be amended to insert Naval Group’s commitment to spend at least 60 per cent of the contract value in Australia over the life of the program to build 12 new Attack-class submarines.

Under the agreement, Australian content will be agreed for each stage of work and Naval Group will be liable for not meeting certain thresholds.

The acting Defence Minister Marise Payne said the agreement includes commitments to maximise Australian industry involvement in all phases of the program.

“Today’s announcement builds on the opportunity for industry to participate in the manufacture of equipment designed by Naval Group worth hundreds of millions of dollars across the 12 boat fleet,” she said.

Defence Minister Linda Reynolds has been on medical leave since February 24 after experiencing heart issues as she was facing intense criticism over the way she handled a rape allegation made by her former staffer Brittany Higgins.

Opposition defence spokesman Brendan O’Connor said the announcement was “light on detail”. He said Labor would push for a spillover hearing of Senate estimates if they were not satisfied with answers given by the acting Defence Minister this week. The government has the numbers on the Senate Standing Committees on Foreign Affairs, Defence and Trade and could block the request.

“As the acting Minister has made this announcement we expect her to be able to answer all questions on these matters in the defence estimates hearing,” Mr O’Connor said.

“If we are not satisfied with the acting Minister’s responses we will be calling on the Defence Minister to appear before a spillover estimates day in April after she has returned to work.

“The government can’t evade scrutiny on these important and expensive contracts.”

“I have been very impressed by the existing capacity of Australia’s manufacturing sector, and its enthusiasm for the Attack Class project,” he said.

“This program will deliver to the Royal Australian Navy 12 regionally-superior Attack-class submarines which are specially designed for Australia’s unique conditions.”

The Morrison government and the Paris-based company are also verging on an agreement covering the next two years of the project.

The government had rejected Naval Group’s original plan for the program’s next phase but the company last month submitted its revised plan, which was developed in consultation with Defence officials.