Federal tariffs may be imposed on emissions-intensive imports into Australia to ensure local businesses aren’t disadvantaged if they spend more money on reducing their carbon footprint to comply with the Albanese government’s new emissions targets.

Climate Change and Energy Minister Chris Bowen on Tuesday released a proposal to enforce pollution caps on the nation’s 215 biggest emitters, requiring them to invest in new technology or carbon offsets to cut their greenhouse output by 5 per cent a year until 2030. 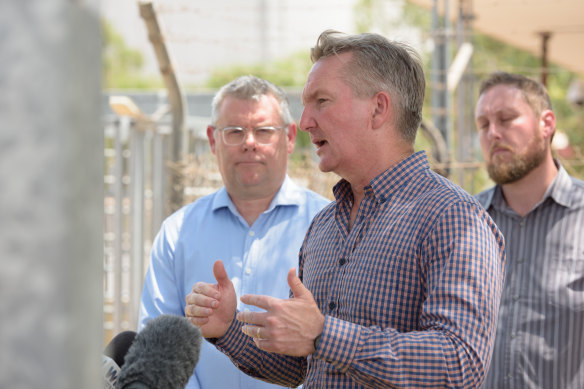 Climate Change and Energy Minister Chris Bowen said he would investigate cross-border carbon tariffs along with a range of policy options.

Bowen said on Wednesday he would investigate a range of policy options including cross-border carbon tariffs to ensure a level playing field for local producers of steel, cement and concrete, among others, when they compete against imports produced in jurisdictions without mandatory emissions targets.

The European Union has said it will have a Carbon Border Adjustment Mechanism in operation next year, Britain and Canada are developing similar policies, Japan has kicked off an investigation into a similar scheme, and the United States is working on a treaty with the EU to facilitate trade of “green” metals produced with clean technologies.

Bowen said some businesses and industry groups had called for the government to investigate tariffs, and the government would consider it among a range of other options to assist Australian businesses.

“Just as Europe has gone down this road Australia will consider its options alongside other options,” he said. “That won’t be in place by 1 July this year obviously, it’s a big change, but we’ve taken on board that feedback.”

Australian Industry Group made a submission to the government last year, when the changes to the safeguard mechanism were being developed, calling for a carbon tariff on imports. On Tuesday, its chief executive Innes Willox welcomed Bowen’s commitment to consider it.

He said a carefully designed carbon tariff was the best way to ensure local businesses remain competitive with international competitors.

“While Ai Group’s research has highlighted this potential, we do not underestimate the complexity and sensitivity of this reform,” he said.

The Business Council of Australia also welcomed Bowen’s commitment to look at a carbon tariff. However, it was criticised by the Australian Chamber of Commerce and Industry, which represents companies that would sell products made using imports that could be made more expensive by a tariff.

“A carbon border adjustment mechanism is simply a punitive tax on imported goods that will do little to incentivise investment in low-emissions technology or increase the competitiveness of Australian industry,” ACCI policy chief David Alexander said.

The Grattan Institute has called for the federal government to investigate a carbon tariff and its climate change and energy deputy director Alison Reeve said the policy would likely bring Australia into line with major economies that are expected to head down the same reform path.

She said a carbon tariff would not only benefit local businesses but also encourage growth in imports of cleaner products.

“If products are coming into the country that have lower carbon emissions than ones we can produce ourselves, that’s actually a good thing,” Reeve said.