Darebin City Council is urging the state government to intervene to stop a hotel in Melbourne's northern suburbs from being used to detain refugees and asylum seekers for Border Force.

The Mantra Bell City hotel in Preston is being used as a makeshift detention centre for about 60 men who have been medically evacuated from Manus Island and Nauru. 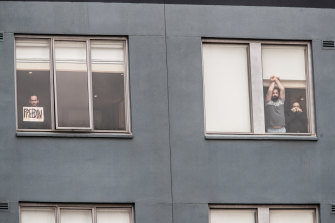 In a confidential meeting on Tuesday, Darebin councillors agreed to ask Planning Minister Richard Wynne to clarify the definition of "hotel accommodation" in the planning rules to exclude immigration detention.

Darebin councillors hope the move might mean Mantra would be in breach of its planning permit if it continued to house the men for the federal government, but it is not yet clear how the amendment could be implemented in practice.

The council will also seek a second legal opinion to determine whether the men are in "rooms away from their usual place of residence", as required within the definition of hotel accommodation. 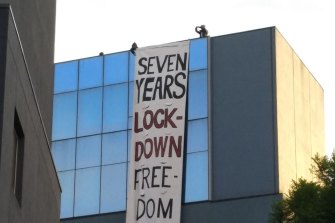 Refugee activists at the Mantra hotel in Preston in May.

"When we're told there's a hotel in the neighbourhood, we don't expect a detention centre where human rights are being violated on a daily basis," Cr Rennie said.

"Perhaps if COVID has taught us anything, it's how much we dislike being locked up and contained, but that is actually the situation these men have been in for months."

Mr Wynne pushed back on the suggestion on Friday afternoon.

"Darebin Council is responsible for administering and enforcing its planning scheme," he said in a statement.

"It should not confuse its advocacy for those being held in detention with how it operates its planning scheme."

The council debated the motion behind closed doors in order to consider legal advice, but councillors voted to make part of the motion public.

Darebin's call for intervention comes after councillors unanimously agreed to investigate whether Mantra was in breach of its planning permit by turning a hotel into a "detention centre or virtual prison".

The men at Mantra are confined to the third floor of the hotel, which is closed to other hotel guests.

The council has also agreed to ask Chief Health Officer Brett Sutton for an investigation into COVID-19 standards at Mantra.

Refugee Mostafa "Moz" Azimitabar, who is detained at Mantra hotel, said asylum seekers have been offered the opportunity to ask for COVID-19 testing after a security guard there tested positive.

Earlier this month, the Federal Court agreed that a 68-year-old man with diabetes and high cholesterol could not be properly protected from COVID-19 by the government while detained at the Melbourne Immigration Transit Accommodation centre in Broadmeadows.

The judgment – that the government was in breach of its duty of care – does not require the federal government to release the man, only to move him out of MITA.

Councillor Gaetano Greco this week also pushed for Darebin to commission local artists "to paint large bold slogans on the council footpath around the Mantra Bell Hotel … in support of the men being held in prison-like detention".

Mr Azimitabar is campaigning against a push by the Morrison government to give Border Force officers the power to seize mobile phones if they believe they are being misused.

Immigration Minister Alan Tudge said this would not be a blanket ban on mobile phones, but Mr Azimitabar argued it could be used to silence refugees.