Critics and Netflix viewers blast 'awful' remake of She's All That

‘The worst film ever made!’ Critics pan ‘awful’ remake of She’s All That starring TikTok star Addison Rae and her pal Kourtney Kardashian (but it STILL manages to hit number one on Netflix)

Netflix’s gender-swapped remake of the 1999 teen classic She’s All That premiered on Friday, and it quickly shot up to number one on the streaming service across multiple countries.

But while He’s All That — which stars TikToker Addison Rae opposite Tanner Buchanan — has drawn in plenty of eager and curious viewers, not everyone has been left with a favorable impression of the flick.

In fact, social media users have blasted the film as ‘TK’ and ‘TK,’ while a reviewer for The Washington Post writing: ‘In the end, “He’s All That” is not all that — not even a little bit of that.’ 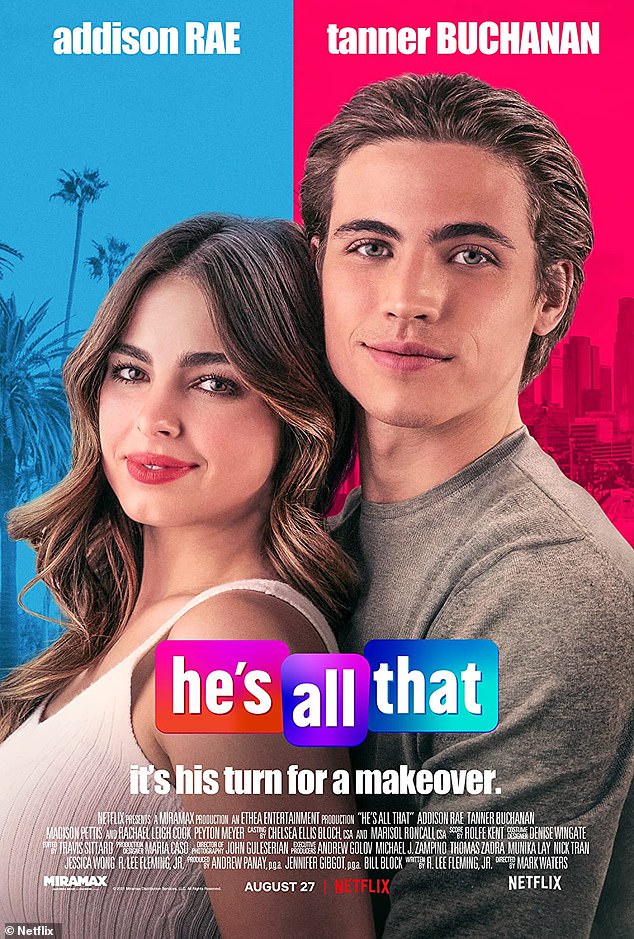 Now streaming: Netflix’s gender-swapped remake of the 1999 teen classic She’s All That premiered on Friday 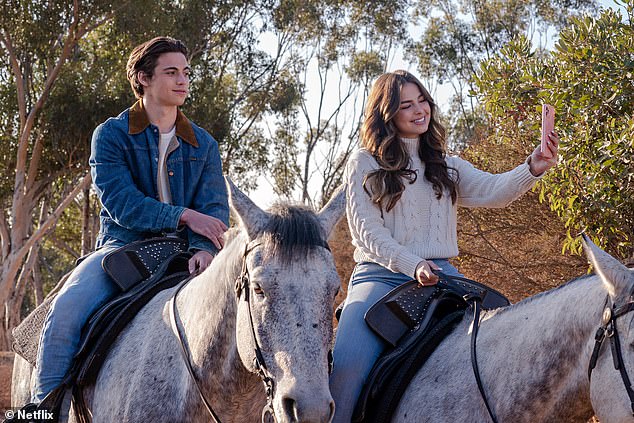 Very popular: It quickly shot up to number one on the streaming service across multiple countries

The reviews for the film are certainly a mixed bag, with some praise coming in.

A reviewer for RogertEbert.com insisted it is ‘a sweet little end of summer sorbet with appealing young performers and a script that refreshes the original without overdoing it,’ with ‘understated but meaningful’ updates and a ‘really fun’ dance-off.

IGN says it ‘has a good head on its shoulders, providing an endearing update of the 1999 original’ and ‘fully stands on its own.’

But others were less convinced of its appeal.

Writes the Daily Beast: ‘He’s All That … is a movie about how anyone can be an actor now, regardless of one’s (lack of) qualifications or talent for the craft. It’s also a groan-inducing addition to the ever-growing list of needless remakes to come out in the past couple of years.’

Forbes called it ‘lazy,’ while Decider described it as ‘meh,’ naming the stunt casting of Kourtney Kardashian, Matthew Lillard, and Rachel Leigh Cook as the best part.

‘He’s All That is a shallow, unnecessary retooling of average and problematic source material,’ they wrote. 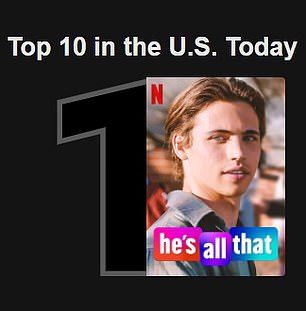 Flying high: Despite the negative reviews, the movie hit number one in Netflix’s top ten chart – and has remained there since Friday

The New York Times panned it, saying the new film ‘lazily rehashes the original but without its endearing weirdness.’

‘If they dutifully deliver the film’s platitudinous message — “be yourself” — it’s with the conviction of a makeup brand selling a “natural look,”’ wrote Devika Girish.

Meanwhile, the Washington Post was unimpressed with Rae’s performance, writing: ‘Some things just can’t be saved, not even by the nostalgic returns of “She’s All That” stars Cook and Matthew Lillard, who appear in small, unrelated roles.’

Twitter reviews have rolled in as well, with some tweets of excitement and favorite still mixed in with harsh comments.

‘He’s All That broke me. I don’t want to be dramatic but it was so bad that I LITERALLY cried,’ wrote Dylan Matthews in a tweet that’s earned over 10,000 likes. 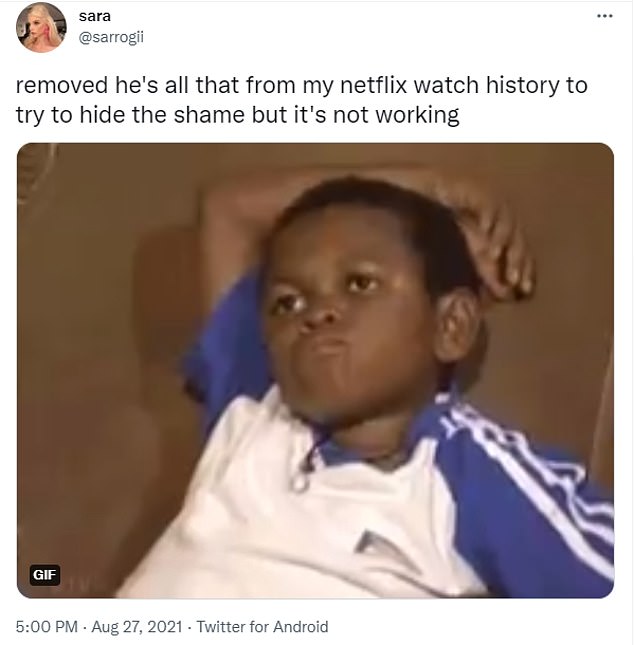 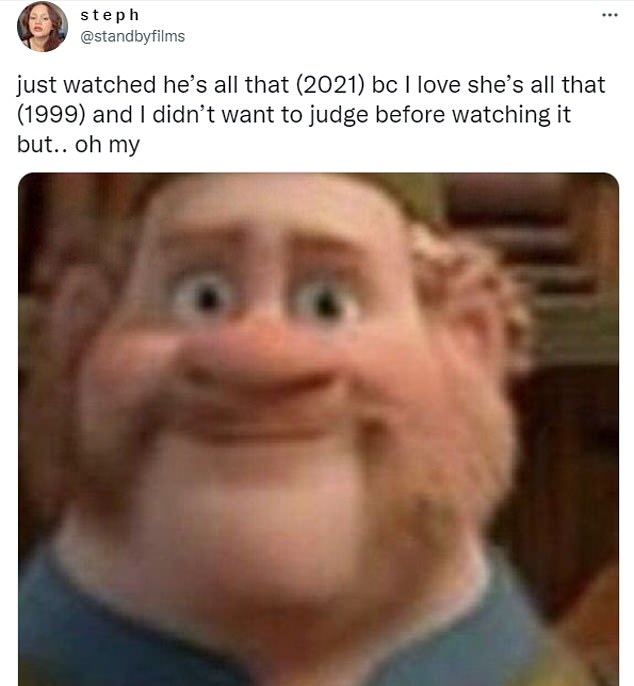 Not impressed! Twitter users have called it ‘awful,’ ‘the worst film ever made,’ and the ‘cringiest movie EVER’

‘Just finished watching “he’s all that” this has got to be the most cringiest movie EVER,’ wrote another.

‘The amount of second hand embarrassment I had while watching he’s all that was insane…literally awful movie,’ added another viewer.

‘I used to think I knew what a bad movie looked liked and then I watched He’s All That,’ wrote a third.

Several social media users were particularly put off by all the embedded marketing.

‘The pervasiveness of the product placement in He’s All That (2021) borders on obscene,’ wrote one, sharing screenshots of Sun Chips, Core water, Pizza Hut, and KFC.

‘The product placement in He’s All That is astounding. At one point there’s a scene that highlights ADT home security systems,’ complained another. 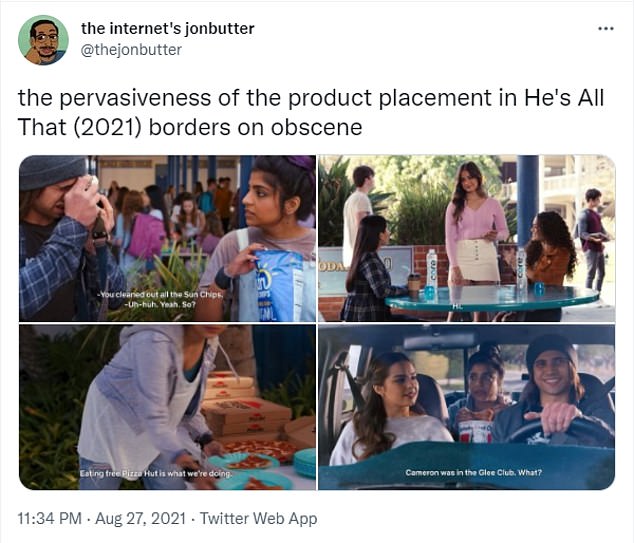 Ad much? Many are also calling out Netflix for having so much product placement

‘The devil works hard but the person in charge of product placement for He’s All That works harder,’ said a third.

Others called it ‘insane,’ ‘awful,’ and ‘out of control already and I’m only 6 minutes in.’

Another user jotted down an extensive list of all the brands marketed in the film, including Eos, Huda Beauty, TikTok, Coach, Lexus, Lunchables, Lucky Charms, Peloton, and Pepsi.

Of course, not everyone hated the film, and fans have called it ‘charming,’ ‘fun and and easy watch,’ and ‘pretty OK.’

In fact, some have said that what’s enjoyable about it is that it’s so bad.

‘That was bad and you should absolutely watch it,’ wrote Mia Mercado for The Cut.