Opposition Leader Peter Dutton has urged voters to hold Labor to account for breaking promises on power bills in his budget reply speech, while declaring support for new spending on childcare and stronger measures against family violence in a pitch to Australian women.

In a major address to win back voters, Dutton defended the Coalition’s economic record and blasted this week’s federal budget as a “missed opportunity” that flouted the Labor election promise to cut household power bills by $275.

The speech backed government programs including support for flood victims and higher spending on medicines but did not state a position on the extension of paid parental leave from 20 to 26 weeks.

“We will stand against Labor’s broken promises,” he said of the Coalition in his address to parliament on Thursday night.

“We will have a clearly defined, positive and bold plan ahead of the next election to take our country forward.

“And we will rebuild a strong economy for your family and for our country.”

In a controversial stance that has sparked attack from Labor, the opposition leader stood by his call for a debate on nuclear energy as a way to provide reliable power with no carbon emissions.

“When the prime minister says that the sun and wind are free energy sources, your power bill tells a different story,” he said.

“It’s much more complicated than that. The technology doesn’t yet exist at the scale that is needed to store renewable energy for electricity to be reliable at night, or during peak periods.

“Labor is going to phase out coal and gas before the new technology has been developed and rolled out.” 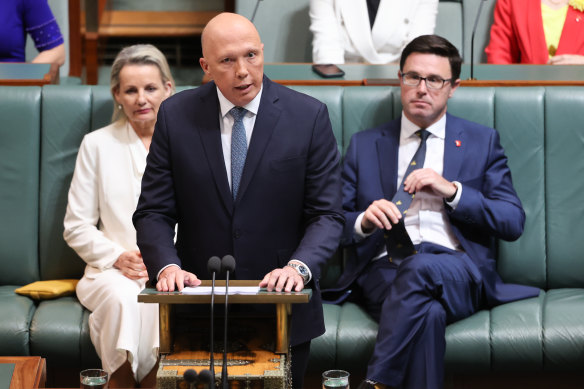 Dutton cited Canada, France, Japan, South Korea, the UK and the US as countries that were all investing in small modular nuclear reactors.

“They are doing this to shore-up energy security and to meet their zero emissions targets,” he said.

“The imperative to create affordable, reliable, and emissions-free energy is why the Coalition is seeking an intelligent conversation on the role these new-age nuclear technologies could play in the energy mix.”

Energy Minister Chris Bowen has launched repeated attacks on the Coalition in parliament for proposing a debate on nuclear energy, setting up a divide on climate change that is likely to continue to the next election.

Albanese returned fire in the argument over power bills in question time on Thursday, ahead of Dutton’s speech, by reminding the Coalition of its promise at the 2019 election to cut wholesale electricity prices by 25 per cent.

Those numbers, published on the AEMO website, meant the average in the eastern states rose by 240 per cent.

Dutton stood by the Coalition’s economic record by citing 560,000 additional jobs in Australia compared to the level before the pandemic and the $100 billion improvement in the budget in the last year of the former government.

While Labor ministers privately debate whether to go ahead with the “stage three” tax cuts worth $254 billion over a decade, Dutton insisted the cuts should go ahead because families would need them when they were due to start in 2024.

“The Coalition will continue to fight for your tax relief because it’s your money, not theirs,” he said.

He dismissed the budget claim the government would help create one million new homes from 2024 to 2029 as “not realistic” and blasted Labor for introducing workplace laws to allow unions to negotiate with multiple employers in a single industry.

“The last time that unions used industry-wide strikes to pursue sector-wide ultimatums was in 1982,” he said.

Albanese holds a personal edge over Dutton of 53 to 18 per cent when voters were asked to name their preferred prime minister in the Resolve Political Monitor earlier this month, and the gap is slightly bigger among women.

Dutton used his address on Thursday night to assure women he supported strong measures on family violence and policies to help them in the workplace, reflecting on his time in the Queensland Police Force before he entered parliament in 2001.

“As a police officer, I saw the best and worst society has to offer,” he said.

“I attended countless domestic violence incidents. There is nothing worse than hearing calls for help from women or children as you hop out of a police car and run towards a house.”

On education policy, however, he highlighted his conservative credentials by calling for a curriculum that taught reading, writing and maths and also taught a love of Australia.

“As a nation, we celebrate our wonderful Indigenous history,” he said.

“But we need to be equally proud of our British heritage and our migrant story.

“Many parents from across the country are increasingly concerned about the education their children are receiving at school.”