Home » Lifestyle » Eishan Ensemble review: Shock of the new colliding with the ancient

Eishan Ensemble review: Shock of the new colliding with the ancient

Notes can be mere building blocks in the prosaic craft of making music, or they can sound so organic as to seem to have been sweated into existence by the very air that carries them. Hamed Sadeghi shapes his notes on the tar so they carry that sort of inevitability. The instrument's sound – part banjo, part baglama and part sarod – is metallic, but not harsh. Rather, it has a slight sourness or bitterness that makes it ideal for expressing profound sadness. 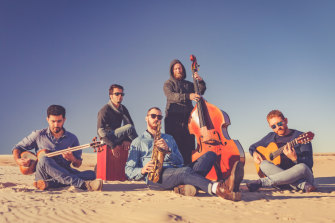 The tar, a Persian fretted lute, has three double courses of strings passing over a body consisting of two wooden bowls topped with sheepskin membranes, and it is played with a brass plectrum. Some people may have heard Sadeghi using it to create the incidental music for William Zappa's memorable Homer adaptation, The Iliad Out Loud.

Eishan Ensemble blends Sadeghi's background in Persian classical music with his interest in other improvisational idioms, including jazz. His four collaborators are distinctive musicians of diverse backgrounds, who bring to bear both flexibility and an ability blend together within the unique sonic worlds of Sadeghi's compositions, which merge cross-currents not just of place, but of time; of the ancient and the very new.

Guitarist Pedram Layegh, saxophonist Michael Avgenicos, bassist Elsen Price and percussionist Adem Yilmaz realised these works with impressive authority for the most part, although sometimes the roles of the guitar and saxophone didn't seem as fully integrated as those of the tar, bass and percussion. Yilmaz contributed an extraordinary array of colours and techniques, using hand-drums and a notably resonant cajon. The collective sound, in one of greater Sydney's finest concert halls, was both precise and warm, the only drawback being that the solos of Price – among the finest double bassists Australia has produced – were not pushed further forward in the mix.

At a time when Iran is disproportionately demonised to suit the debased agendas of Donald Trump and Benjamin Netanyahu, it is especially pertinent to be able to delight in music derived from one of the oldest cultures on earth.