Home » Lifestyle » ‘Extraordinary’: Albanese unloads on Morrison for not briefing him on AUKUS months before announcement

‘Extraordinary’: Albanese unloads on Morrison for not briefing him on AUKUS months before announcement

Labor leader Anthony Albanese has accused Prime Minister Scott Morrison of breaking trust with the Biden administration by not briefing Labor well before the announcement of the AUKUS defence pact, as the presence of a Chinese spy ship off Australia’s coast re-ignites debates over national security.

The Sydney Morning Herald and The Age revealed on Saturday that four-and-half months before the announcement on September 16, senior members of the Biden administration insisted that it would only consider pursuing the landmark AUKUS project if it had solid support from both major Australian political parties. 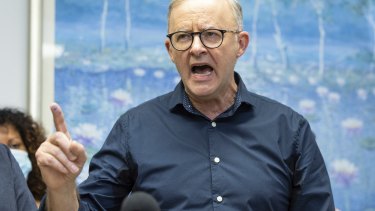 Instead, the Morrison government waited until the day before the announcement to brief Albanese and senior members of the opposition about the plan to build nuclear submarines with the help of the US and Britain.

Albanese said it was “extraordinary” that Morrison “breached that faith and trust with our most important ally by not briefing Australian Labor on these issues”.

“When the request came in, I should have been briefed,” he said.

“They [the US] wanted to have the confidence that this would be a bipartisan issue in terms of support.”

Albanese said the briefing on September 15 was a “good comprehensive briefing by officials”. But he said the fact that the US had made a request to Australia “that was ignored for-four-and-a-half months shows that this is a prime minister who always plays short-term politics and isn’t interested in the national interest”.

“I will not treat national security issues as an opportunity to make a difference on partisan domestic political points,” Albanese said. “No Australian Prime Minister should do that.”

The divisions come as Australia has been tracking the movements of a Chinese spy ship for a week off Australia’s west coast in international waters.

Defence Minister Peter Dutton held a press conference on Friday afternoon to reveal the presence of the Chinese ship, which was thought to be collecting information on a naval communications base that supports American and other allied submarines.

Albanese said it was important to note that Morrison had not followed Dutton in labelling the presence of the Chinese ship an “aggressive act” and said it is up to the Defence Minister to explain the timing of the announcement.

The Labor leader said the opposition was briefed on the Chinese ship but its defence spokesman Brendan O’Connor was seeking a more comprehensive briefing on the matter. He said Labor “shares concerns about the presence of an intelligence ship off the coast of Western Australia from the Chinese Government”.

Asked to comment on Dutton’s characterisation on Saturday, Morrison said “freedom of navigation is permitted all around the world and no one’s made any suggestions that any rules were breached in relation to the International Law of the Sea”.

“And the International Law of the Sea has not been breached,” he said.

“The relevant Australian politician should see the relevant situation objectively and calmly, and not make sensational remarks,” Zhao told reporters at a daily briefing.

The ship on Friday was being tracked about 250 nautical miles from Broome in Western Australia.

It is similar to a high-tech Chinese surveillance ship which sat off the Queensland coast last July monitoring military exercises between Australian and American forces.