Music writers and critics review four new albums, including music from London-based 2018 ABC Young Performer of the Year Emily Sun, the pop singer who channels Enya and St Vincent, Half Waif, Electronics maestro Sam Shepherd of Floating Points and character actor Karen Black brought back to life in her songs. 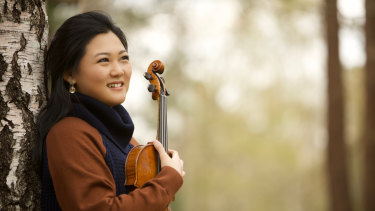 Emily Sun seems to breathe as one with pianist Andrea Lam in their expressive collaboration.Credit:Patrick Allen.

A gorgeous debut album of late romantic French music from London-based Australian violinist Emily Sun (2018 ABC Young Performer of the Year), accompanied by New York-based Australian pianist Andrea Lam, also young but already highly distinguished. This is a winner on every count: the music itself, the individual playing, the expressive intensity, and the collaboration between the pair, who seem to breathe as one. Sun brings lush sound, firm attack and purity of tone to the deeply romantic and poetic Franck violin sonata. The pair have formidable rivals in the recordings of this sonata, but I will return often to this account. The other main piece is the Faure sonata, a gentler and more intimate work whose sophistication is often understated. Here the various complexities unfold naturally, idiomatically and beautifully. Woven around these two sonatas are four miniatures. Debussy’s Clair de Lune (Moonlight) is as delicately rapturous as one could hope, as is Faure’s much-loved Apres un Reve (After a Dream). The final works are much rarer: a simple but elegant nocturne by Lili Boulanger, tragically taken by tuberculosis at only 24, and a melancholic arrangement of Edith Piaf’s signature tune, La Vie en Rose. BARNEY ZWARTZ

You don’t so much listen to Half Waif as surrender to her. US singer/songwriter/producer Nandi Rose (here with multi-instrumentalist Zubin Hensler) creates sound-worlds; wombs of glowy pads, pillowy pockets of space, rippling synths, dramatic drums and the smoothest of gear changes. Her rich mezzo-soprano easily carries spare tracks, too, such as piano ballad opener Fabric and the searingly sad Sourdough, but mostly she’s stretching, stacking and clipping her vocals, rendering electronic sounds warm, and sharpening heartbreaking lyrics with their perfect sonic complement. On Take Away the Ache, about the futility of relying on someone else to save you, choppy beats usher the track to its climax as Rose sighs “the more you love the more you lie” on an ethereal, resigned loop. There are traces of fellow dream-pop auteurs across the album — the likes of Caroline Polachek and St Vincent spring to mind, and she’s definitely channelling Enya on the breathtaking Midnight Asks — but Rose’s own sound is unique, and her songs hit like revelations. Now five albums deep into interrogating her emotional duality, she’s no closer to getting clear answers. But she reminds us that even the darkest night is lit with stars. ANNABEL ROSS

It’s one thing to have a 60-year career; quite another to be a force for that time. But here is Pharoah Sanders in 2021, still searching for truth, reaching for beauty and questioning the limits of his art. Electronics maestro and composer Sam Shepherd (aka Floating Points) induced Sanders back into the studio after a long hiatus dotted with live concerts and newly released material from earlier in his illustrious career. This collaboration with Shepherd and the strings of the London Symphony Orchestra offers a stunning re-contextualisation of Sanders’ titanic tenor saxophone. Shepherd’s nine-movement suite mostly wreathes the instrument in halos of misty electronics and sparse, elegiac strings, so the breadth, soulfulness and invention come into greater focus than can sometimes be the case amidst a storming rhythm section. So much was made of Sanders’ overblowing and shrieking in the wild and woolly ’60s that many people missed what was happening behind that veneer of in-your-face radicalism: one of the most sumptuous tenor saxophone sounds of all time. Here you can fully immerse yourself in that, plus some ingenious electronics and gripping string writing (notably in the dramatic 6th movement). JOHN SHAND

When the great character actor Karen Black died in 2013, most obituaries failed to mention her credentials as a singer-songwriter. Her writing and recording of music took place firmly in the background of her film career, which included roles in Nashville, Easy Rider and, most triumphantly, Five Easy Pieces. Black’s singing came to light for a new generation when she collaborated with genius American artist Cass McCombs on his 2009 album, Catacombs. It is McCombs who has compiled this collection of Black recordings – and it’s a thing of poetry, melody and vitality. Black’s deep, melancholy-tinged voice does not stay still: sometimes she evokes the warm pop tones of Melanie Safka, elsewhere the elegant folk trill of Judy Collins, and even singers like Doris Day or Judy Garland here and there. Most tracks on Dreaming of You are scruffily recorded in the most charming way, the arrangements’ sparseness lending weight to the skilful and mature writing. Songs range from the bleak, Leonard Cohen-esque You’re Not in My Plans to the chugging folk-rock of Babe Oh Babe and the Gypsy-ish folk of Love Peddler. Black’s music is a trove of delight, and thanks to McCombs’s devotion, it can now be celebrated. BARNABY SMITH

THE WATCHLIST
Find out the next TV, streaming series and movies to add to your must-sees. Get The Watchlist delivered every Thursday.

fall, in, Love, Romantic, the, with
World News