Home » Lifestyle » Federal Parliament: If this were a schoolyard, you’d lock it down

Federal Parliament: If this were a schoolyard, you’d lock it down

If this were a boarding school, there would be expulsions in every direction, uproar from the parents’ committee, mass withdrawals of students and the principal would be sacked.

But it’s the national Parliament, where the adults claim to be in charge. 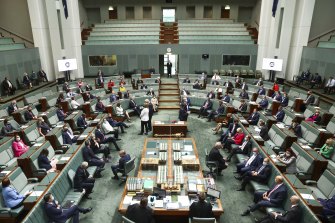 The House of Representatives this week turned into something resembling a dogfight.Credit:Dominic Lorrimer

A former staffer tells in toe-curling detail of waking up in a Cabinet Minister’s bed, only to be tossed out, naked, the Minister snarling that he needed his sleep. The Minister declares he “completely and utterly” rejects the young woman’s version of events, though of course he’d already admitted to an affair with her.

Soon after, the said minister, Alan Tudge (who has strongly denied these details), is ordered by the Prime Minister to stand down from his cabinet position while the matter is investigated.

A female Greens senator, Lidia Thorpe, yells “at least I kept my legs shut” at a female Liberal senator, causing her to burst into tears, while the Parliament is in session.

Sorry? You imagine there is a sensible explanation for such an outburst? The Senator apologises, but doesn’t agree with the characterisation other Senators took from her words.

A male Senator is heard making “dog noises” and growling while a female Senator is delivering a speech. Victorian Senator David Van eventually apologises, but says he didn’t do it.

Beginning to get a picture?

It’s no more than a pencilled sketch of how things have been in this last week of the federal parliamentary sittings for 2021.

It was a week in which the Prime Minister released a report that found one third of all female staffers had experienced sexual harassment and bullying was rife.

Many of the stories in the report were harrowing to read. The report was prepared after one former staffer, Brittany Higgins, alleged she had been raped by a colleague.

The Prime Minister called for a change in the culture and better behaviour throughout the Parliament. Everyone nodded soberly.

A couple of hours later, question time in the House of Representatives turned into something resembling a dogfight, though there is nothing particularly unusual about that.

Still, Opposition Leader Anthony Albanese yelled at the leader of the house, Peter Dutton, to “sit down, you boofhead” when Dutton tried to intervene, quite against standing orders, while Albanese was trying to make a point of order.

The Prime Minister himself was asked to withdraw an imputation linking Labor members with jail during what could only be described as a rant that came nowhere near answering a question.

Meanwhile, former attorney-general Christian Porter, who has been refusing to say where he got something possibly approaching $1 million to pay his legal fees in a defamation case after he revealed he was the subject of an ABC story concerning untested claims of historical rape (which he denies), resigned from Parliament altogether.

“Perhaps the only certainty now is that there appears to be no limit to what some will say or allege or do to gain an advantage over a perceived enemy,” he wrote.

Perhaps, given the spectacle that was Parliament this week, there are few depths left that parliamentarians themselves will plumb to seek some perceived personal or political advantage.

If this were a boarding school, you’d close it.