Labor leader Anthony Albanese has given an impassioned endorsement of an Indigenous Voice to parliament, and called the Uluru Statement from the Heart a generous “act of grace” from First Nations people towards the rest of the country.

Albanese began his final press club address before the election by acknowledging Traditional Owners and reiterating his support for the Uluru Statement, which calls for the creation of an Indigenous Voice. 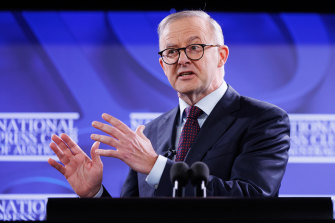 Anthony Albanese has reiterated his support for the Uluru Statement from the Heart. Credit:Alex Ellinghausen.

“If an Australian government can take up the invitation First Nations people have extended to us, an invitation that is so generous it stands as an act of grace, it will help define our future as a more reconciled and more equal country,” he told the press club.

An Indigenous Voice would function as an advisory body that would consult parliamentarians on decisions and policies that affect Aboriginal and Torres Strait Islander people.

Labor has committed to holding a referendum on enshrining a Voice in the Australian Constitution, ensuring it cannot be abolished as the Aboriginal and Torres Strait Islander Commission (ATSIC) was under the Howard government.

In his press club address, Albanese spoke of an Indigenous Voice as an aspirational opportunity for positive change.

"A good government will grasp the opportunity for healing and truth and reconciliation offered by the generous Uluru Statement from the Heart. That hand out just asking to be grasped, and asking for good manners to be implemented," he said.

"Good manners tell you when something you do has an impact on someone else, talk to them. That’s all a Voice is. Ask them, and hear them, and listen to them."

While Albanese has previously said he would aim to hold a referendum on the issue in the first term of a Labor government, the Coalition has ruled out supporting a national vote.

The Coalition will instead opt to push ahead with legislating dozens of local and regional Voice bodies.

The renewed focus on an Indigenous Voice comes just a day after the Coalition failed to send a representative to the national Indigenous broadcaster’s election special.

“There’s an elephant in the room, we have an empty chair,” she said.

“We made repeated attempts, constant calls and emails, but nobody from the Coalition was available to join us. Not one minister, not one candidate.”

The Prime Minister failed to answer why the program had been ignored when asked about the issue in the Northern Territory on Tuesday.

“Prime Minister why won’t anyone from the Coalition appear on the national Indigenous broadcaster’s election program? We’re in Lingiari, it has the highest population of Indigenous Australians, are these issues not important to you?” asked SBS political correspondent Shuba Krishnan.