Forget the haunted house, this entire neighbourhood is cursed

The haunted house is a staple of the horror genre, but the belated sequel to Candyman produced and co-written by Jordan Peele (Get Out, Us, Lovecraft Country) goes one better: it’s about a haunted ’hood.

In the 1992 original, Virginia Madsen played a university student whose research into the urban myths of the Cabrini Green social housing project in Chicago led her to a bee-spewing supernatural serial killer with a steel hook for a hand, who could be summoned by staring into a mirror and saying his name five times. 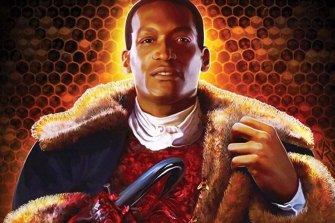 The Candyman sequel breathes new life into the cult hit about an old myth.Credit:Universal

Based on a short story by Clive Barker, it is regarded as a cult classic, its reputation surviving even a couple of cheap-and-nasty cash-in sequels later that decade.

The new film, co-written and directed by Nia Da Costa, is cut from an entirely different cloth. Much like Peele’s previous forays into horror, it’s a deeply political allegory loaded with commentary on US race relations. It may also be the first time the role artists play in the gentrification of poor neighbourhoods has been invoked as a source of horror.

“I’ve been dealing with issues of gentrification since I was in high school, when I first learned the term,” says Yahya Abdul-Mateen II, the Watchmen star who plays the lead role of Anthony McCoy, a painter who becomes obsessed with and possessed by the mythical Candyman.

“I had desires to be an architect, but my way in was through city planning,” he says. “That’s when I first turned my mind towards the idea of people moving in and changing the face of a community, the question of where and when resources are allocated.” 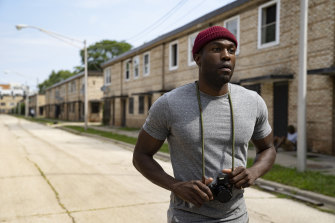 Anthony McCoy (Yahya Abdul-Mateen II) wanders through the row-house remnants of the Cabrini Green housing estate in search of inspiration.Credit:Universal

Anthony grew up poor, but left the ’hood, went to art college, and has now moved with his gallerist girlfriend into a pricey townhouse in what used to be a high-rise slum.

“He comes back sort of as an outsider, as a gentrifier,” Abdul-Mateen says. “But there’s the other layer of how he’s intrinsically connected to the history of that place, so there’s something to be said about the inevitability of a person’s life.”

Candyman doesn’t just use this stuff as background, though – it is central to the plot.

A critic disses Anthony by saying, brutally but not without some justification, that artists are “the real pioneers” of gentrification, “descending on disenfranchised neighbourhoods to find cheap rents so they can dick around in their studios without the crushing burden of a day job”. 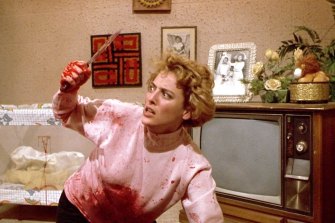 Virginia Madsen in the 1992 original.

Anthony fights back, arguing that artists are but pawns in the games of city administrators and developers. “The city cuts off a community and waits for it to die,” he says. “Then they invite developers in and say, ‘Hey, you artists, you young people, white preferably – or only – please come to the hood. It’s cheap. And if you stick it out for a couple of years we’ll bring you a Whole Foods [store]’.”

To his art dealer Anthony says: “I’m thinking about doing something on the projects, and how white supremacy creates these spaces of rampant neglect for communities of colour.”

All of which is to say that while Candyman works as horror – with some superb moments of visual and narrative inventiveness – it has its sights set on a much bigger story: the displacement of African-Americans, from their neighbourhoods, from their streets, from their own mythology (the original Candyman was, of course, set in a black world but told from a white perspective).

This Candyman has a different origin story, and a different role to play. Even the phrase “say my name” carries a different weight now. Though the film was made before George Floyd’s murder, it almost predicts it. 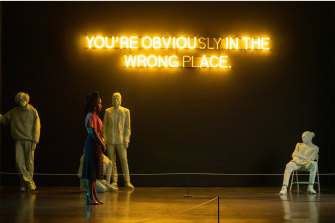 Teyonnah Parris plays Brianna, a gallerist struggling to be taken as more than a token in the art world.Credit:Universal

“Obviously we had no idea of what the world would turn into when we were making it, but sadly we knew it would still be relevant,” says Abdul-Mateen. “We knew there would be more hashtags, more names to know, more names to learn and to honour and to remember.”

Who remembers, and how their stories are told, is key to this Candyman. And that applies to the story of the projects themselves.

There’s a way of looking at Cabrini Green that doesn’t reduce it and places like it to an unrelenting hell, the actor says. And he should know: as a child he lived for a time in the projects in New Orleans and Oakland, California.

“Those are the things that people don’t highlight,” he adds. “It’s the strongest sense of community I’ve ever known in my life.”

Candyman is in cinemas now.