Friends star David Schwimmer has been labeled ‘jealous’ and ‘despicable’ by the monkey trainer who looked after his capuchin co-star Marcel, after admitting that he hated working with the primate during the first season of the show.

Schwimmer, 54, was quick to complain about his on-set experiences with Marcel during the recent Friends reunion, in which he accused the monkey – played by two female primates called Katie and Monkey – of ‘messing up scenes’ and getting live grubs in his hair and on his face.

But while his comments prompted plenty of laughs on the HBO Max special, they have come under furious criticism from professional monkey trainer Mike Morris, 53, who has now clapped back at New York-based star Schwimmer, insisting that he is just ‘jealous’ of Marcel’s on-screen success. 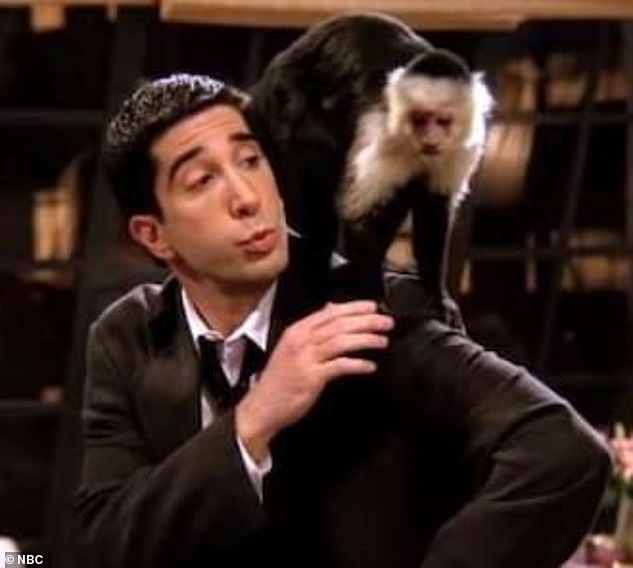 Controversy: David Schwimmer has come under furious criticism from the monkey trainer who looked after his capuchin Friends co-star after the actor said he hated working with the animal Upset: Monkey trainer Mike Morris has branded Schwimmer, 54, as ‘despicable’ and ‘jealous’ for complaining about primate character Marcel during the Friends reunion on HBO Max

‘Schwimmer was fine with the monkeys for the first couple of episodes and happy to be there,’ Morris told The Sun. ‘But people would laugh at the monkey and I think he got jealous because it wasn’t him getting the laughs.

‘He seemed to get a little bitter about them being there after that. And of course the monkeys didn’t like working with him after he turned on them.’

The animal trainer said that Schwimmer’s dislike of the monkey ‘made it harder’ for everyone on-set, claiming that the actor wasn’t ‘very helpful’ when it came to filming scenes with the primate – which were already tricky to do because of the complex nature of a five-star cast and all that is involved in shooting that kind of show.

‘Schwimmer wouldn’t prep with her, he didn’t want to rehearse with her,’ Morris continued – explaining that the monkey was therefore left to prepare for scenes by herself, which made things all the more difficult when they went to try for a take.

According to Morris, Schwimmer was the only actor who ever had an issue with the primates, with the trainer insisting that his animals worked perfectly with the actor’s co-stars Jennifer Aniston and Matt LeBlanc.

During HBO Max’s Friends reunion, Jennifer, 52, did attempt to defend the monkey against Schwimmer’s comments, telling host James Corden that she ‘loved’ working with the primate.

Schwimmer, on the other hand, couldn’t have been clearer about his dislike for his capuchin co-star, telling the reunion’s live audience that he was thrilled when the producers decided to axe Marcel’s character from the show.

‘The monkey would mess up scenes and when it didn’t do its job right, we would have to go again over and over,’ he continued, venting his frustration over being told: ‘The monkey didn’t hit its mark, I’m sorry.’

He added: ‘That combined with the trainer giving the monkey live grubs to eat. He would eat in and I would have monkey grub hands all over my face.

According to monkey trainer Morris, the reunion show did not mark the first time that Schwimmer had criticized Marcel, with the animal expert claiming that the actor had previously accused the primate of throwing poop on-set and trying to bite him.

‘I have never ever watched Friends because of Schwimmer’s comments about the monkeys,’ he said. ‘I have refused to ever since he did an interview after the animals got written out of the show and he said they tried to bite him and throw poop at him.’

Morris suggested that Schwimmer’s previous allegations about the monkeys were false, adding that ‘none of that every happened’ when he was present on-set.

During the first season of the hit series Friends, Marcel was actually played by two different monkeys, Katie, now 30, and Monkey, who passed away from cancer last year at the age of 36.