Angharad “Rad” Yeo hosts ABC TV’s Good Game: Spawn Point, and over the last few months she’s written, produced, edited and hosted a podcast all about video games, and how they reflect and inform our culture.

“The podcast is all about how video games fit into the larger fabric of our culture, and how they grab ideas that exist in normal societal discourse, and how games influence that conversation,” says Yeo. 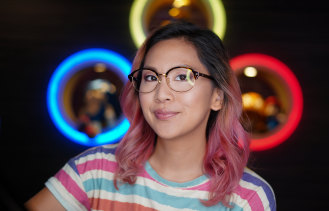 “And it’s something that I wanted to do for a long time, because I think the conversations about video games as an art form are really interesting, and it’s not something that gets explored that often. We talk about games in a way they’re not often talked about, which is a shame because games are extremely interesting as a form of entertainment, and what we find entertaining is very revealing to where we are as a society.”

According to Yeo, games can often act as a leading indicator of where society is heading.

“Gaming culture tends to be a ground zero for the rest of our culture. Things tend to happen there first, and I think that is because it’s such a passionate group of people, who live their lives on the internet and the social spaces online. So inspecting that and looking at what’s happening there and why maybe that is, is really interesting to me.”

Yeo goes beyond the Triple A titles and first person shooters to find the unique experiences independent games have to offer. In one episode dedicated to games exploring nature, she played a virtual reality game that lets the player experience life as a tree.

“The game is really beautiful. You start as a sapling, you grow, and interact with buds, and then you see a fire starting in the distance, and that fire begins to spread and come towards you. And it’s a really deeply impactful look at things like bushfires and climate change. And I think that we see those conversations often start in games in an interactive way because it’s made by people who are trying to convey an experience rather than tell a story sometimes. Games allow you to do that in a way that other mediums can struggle with.”

The Australian games industry punches well above its weight on the global stage. Yeo points to the creativity of Florence and the recent hit Untitled Goose Game as examples.

“Whenever I look at Australian indies, I’m always taken aback by the amount of creativity and wackiness and excitement that’s there … It’s like all the talent is here, we just need the funding and support.”

“Games are gaining that legitimacy of being an entertainment medium and a cultural product rather than just something silly and fun that kids and nerds play. And I think it’s important to reframe them as the industry moves forward, because it’s a huge industry that can be very profitable for Australia.”