You know what they say: Babies don’t keep! It seems like yesterday that the world learned George and Amal Clooney were expecting twins, and now their tiny dynamic duo is turning three. Not surprisingly, little Ella and Alexander Clooney’s parents are fiercely protective of them and, as such, they tend to safeguard the children’s privacy. But George and Amal have let a few fun facts about their twins slip — and, well, the next generation of Clooneys sounds just as amazing as their powerhouse parents. 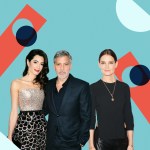 The start of Ella and Alexander’s story, of course, begins with George and Amal’s. He was Hollywood’s most favorite eligible bachelor with a heart of gold and penchant for activism. She was a stunning (not to mention inspiring) international human rights lawyer. When they were introduced through a mutual friend at a 2013 fundraiser, sparks flew. Less than a year later, they were engaged. Near the end of 2014, they wed in a romantic ceremony in Italy. At 53, Hollywood’s eligible bachelor was officially off the market for good.

Little did anyone expect, his walk down the aisle was a direct path towards fatherhood. After nearly three years of wedded bliss, George and Amal welcomed Ella and Alexander into the world on June 6, 2017. Here’s what we know about the two wildly lucky tots.

C’mon, with parents like George and Amal, how could these kids not be tiny geniuses? During an appearance on The Ellen DeGeneres Show in 2019, Clooney confessed that the twins’ intelligence intimidates him. “Here’s the scary part, because they obviously got my wife’s brains,” he told DeGeneres. “They’re not quite two, and they can count from one to 20 in English and Italian.” Joking, he added, “I’m still trying to do the English part.”

2. They inherited the prankster gene

Okay, okay… being a prankster probably isn’t hereditary. However, the Clooney twins make a compelling case that it could be. “They do pranks already,” their dad, who is a notorious prankster, told Today’s Savannah Guthrie. “[They] put peanut butter on their shoes so it looks like poo poo on their shoes and stuff, and they think that’s funny.” I mean, they’re not wrong.

On the red carpet prior to accepting his AFI Lifetime Achievement Award, Clooney shared that there isn’t an award in the world that can compete with being Elle and Alexander’s dad. When asked about his greatest achievement, he said, “Well, it’s not really my achievement; it’s much more our achievement and our luck. It’s these two knuckleheads we have at home right now, because it is pretty magical and pretty fun. This is all really exciting, but it’s really fun being home.”

Considering how much Mom and Dad have to travel for work, it makes sense that Ella and Alexander are already racking up the frequent flyer miles. But while making the press rounds for Catch-22, George admitted traveling with toddler twins is akin to being in a traveling circus — a big change of pace for the ol’ bachelor.

“I got married at 53 years old. For most of my life, I was able to just pick up and do something on my own. And now it’s like you can’t get into the car without baby seats,” he said. “And let me tell you something, I am now the master of putting a baby seat in a car.”

If you’re wondering about the twins’ birth order, wonder no more. Alexander is the oldest child, having been born exactly two minutes before sis Ella. Per the birth certificates obtained by ET, he arrived at 12:54 p.m., while she made her debut at 12:56 p.m. Plus, George told DeGeneres during his visit that Alexander is also taller than his sis now.

6. But she calls the shots

During his conversation with Guthrie, George revealed Ella is the more assertive sibling. “My daughter will be like, ‘Sit down.’ And then he’ll sit down,” the proud dad said. Grandma Baria Alamuddin confirmed Ella’s empowered personality while chatting with HELLO! magazine. “She’s only two years old and already the most powerful girl in the whole family,” Baria gushed. “She’s just determined and knows what she wants, and I couldn’t be more pleased about that.”

“They have their own personalities. He goes outside and hugs my car. ‘Car!’” George told DeGeneres, pantomiming Alexander hugging a vehicle. “And then my daughter’s up in my wife’s closet with purses going, ‘Mine!’ So I see this is going to be a fun, fun life for me.”

The Clooneys’ former nanny, Connie Simpson, insisted the children get their distinctive personalities from their parents. “It was really funny because the little girl was such the essence of her mother and the little boy is the essence of his dad,” she told People in 2018. “It just kind of grew … you could see it manifesting every day that you were with them. The look that George has in his movies, his son was showing that too and I just thought that was the cutest thing.”

Two is a tough year in the life of many parents since, developmentally, toddlers go through a lot in that time span. And by a lot, we mean their emotions are all over the place so they become tiny domestic terrorists. If you ask George, though, Ella and Alexander seem to be skipping over the tough stuff. “They’re not terrible twos,” he told Guthrie. “They’re good kids. They’re happy kids. They laugh a lot.”

9. They do the international house hop

What a tough life — the Clooneys split their time between the U.S. and their homes in both England and Italy. So, where will the twins grow up? That’s TBD. “As soon as the children go to school, it’ll be necessary to choose where to settle,” George told Paris Match. “In the meantime, we’ll continue to move according to our respective schedule.”

10. Everyone will be envious of their uncles

Since George waited so long to get hitched and become a dad, he had a lot of time in his bachelorhood to build relationships with his best guy friends. And, oh, what best guy friends he has! Brad Pitt, Matt Damon, Barack Obama, David Beckham, Don Cheadle, Rande Gerber — the list goes on and on.

11. They’re being raised to be well-rounded

We can’t predict for sure how Ella and Alexander will turn out. But judging by George and Amal’s parenting principles, we’re inclined to think they’ll change the world just like their mom and dad. “I want them to be happy. I want them to have a sense of humor. I want them to be interested in things. I want them to be compassionate about other people’s plights,” George told The Hollywood Reporter. “Because that’s the thing, you know? You have to have some sort of empathy.”

In 2020, Clooney shared with The Guardian that son Alexander suffers from asthma — a health condition that put dad Clooney all the more on high alert during the Covid-19 pandemic. “This has been a crappy year for everyone. Started badly and ran badly all year long, until recently,” he said in December. “But I’m very lucky. I ended up having a successful career. I wound up living in a home with some space in it. We can walk around outside,” noting that they hadn’t left the compound because “my son has asthma. They say it’s not so bad on young people. But do we know that? We don’t know anything about the longterm of this yet.”

13. They watch Peppa Pig too

And now, so does George Clooney. Opening up about the time he spent hunkered down with his kids during the Covid-19 pandemic, Clooney told People that it included plenty of Peppa Pig. “I mop, vacuum, do laundry and cut hair,” he said. “I’m lucky because our kids are 3, so I don’t have to homeschool trigonometry. I can survive with just spending time with them.”

A version of this article was originally published June 2020.

Before you go, click here to see all the celebrities who are the parents of twins.