Home » Lifestyle » Giraffes, rhinos and elephants in Kenya under siege

Giraffes, rhinos and elephants in Kenya under siege 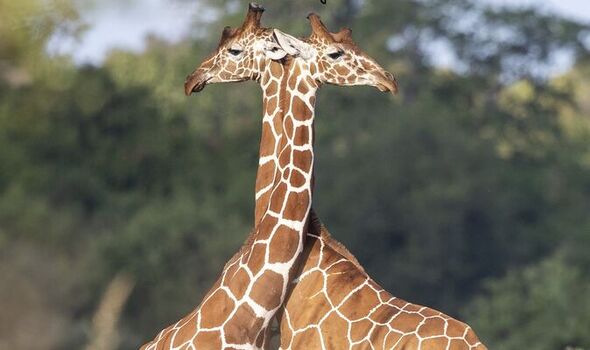 But Meru National Park’s 1,400 gangly giants face being killed or horribly maimed by poachers without the help of dedicated conservationists. Newton Simiyu and Francis Kago, from Born Free Kenya’s Saving Meru Giants initiative, are among a team trying to ensure a safer future for giraffes and elephants in the African bush.

Francis says there has been a huge increase in hunting giraffes for bushmeat by hungry and desperate locals who lost their jobs during the pandemic.

As we drive through the park, 220 miles from Nairobi, in the shadow of Nyambene Hills, Francis says: “Snares remain a grave threat to the species.”

The team tries to identify the giraffes using software and photos of their side patterns.

We head along a dirt road into a guarded sanctuary that is home to more than 100 black and white rhinos. It is off-limits to the public because of the threat of poaching for their horns. The rhinos here are thriving and Born Free helps by providing fuel for rangers to patrol the area and solar panels to charge phones for back-up.

Newton says: “The last case of rhino poaching in Meru was in 2018, so you can see the impact of our support.”

Sadly, we do not see the King of the Savannah, but Born Free’s Pride of Meru project safeguards lions, often injured by snares meant for smaller animals.

At the same time locals are struggling to co-exist with elephants, which raid their crops and get injured or killed when farmers retaliate with force.

Newton says: “Education is paramount. Awareness and training of local communities is vital in conservation.”

Like the lions, the elephants do not emerge. But a few days later we spot a mother and calf enjoying a dawn breakfast at Samburu National Reserve, three hours from Meru.

There is nothing quite like seeing wild animals exactly where they are meant to be.