Mother reveals her ‘miracle’ daughter, 5, with cerebral palsy took her first steps unaided days after her father died – despite doctors believing she may never walk

A five-year-old girl who doctors said may never be able to walk has taken her first steps unaided just days after her father tragically passed away.

Felicity-Rose Edgar, from Welling, southeast London, developed cerebral palsy after she was starved of oxygen at birth and had to be resuscitated following hospital delays in getting her mother a caesarean section.

The incurable condition affects movement and coordination and can leave sufferers with serious brain damage.

Despite coping with the death of her father, Felicity-Rose defied the odds only days later when she said ‘look mummy, I’m going to walk’. 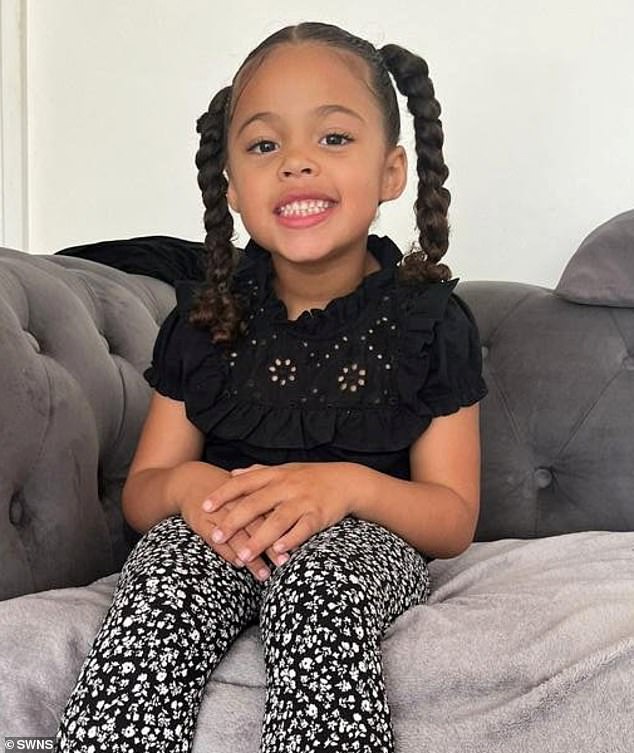 Felicity-Rose, five, from Welling, southeast London, was starved of oxygen when she was born and suffers from cerebral palsy as a result 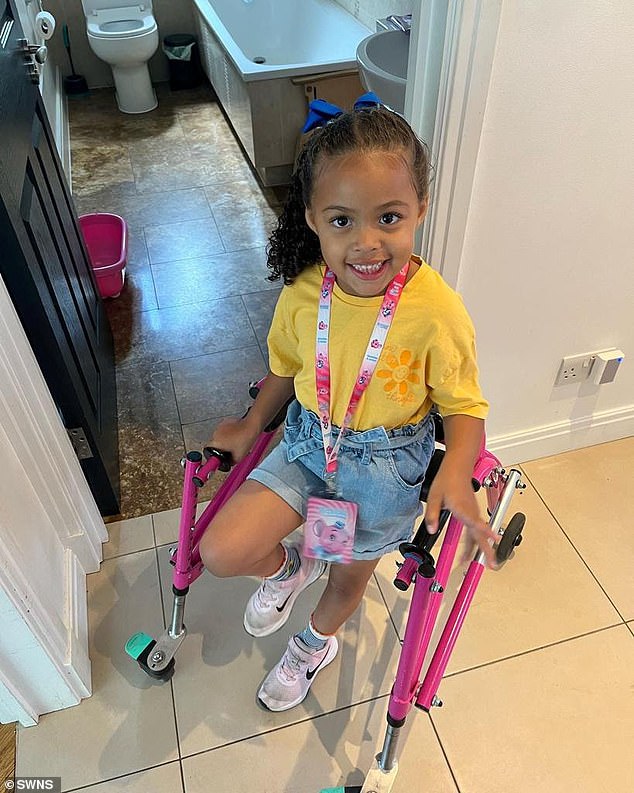 However, the youngster has defied the odds and doctors’ expectations and can now walk unaided 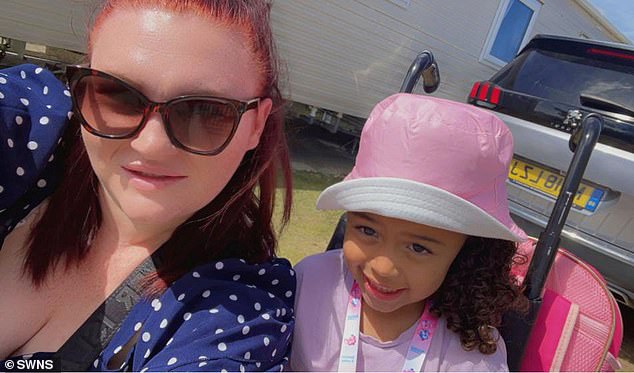 Delays getting a C-section for Amber, 26, (left) at the Queen Charlotte’s and Chelsea Hospital in Hammersmith, meant Felicity-Rose was starved of oxygen and had to be resuscitated

Amber, 26, said: ‘We were all devastated at losing Adam and especially Felicity as he was her best friend.

‘About a week after he passed away Felicity suddenly said, “look mummy, I’m going to walk” and she launched herself across the room.

‘I just burst into tears from happiness after all of the pain I had felt from Adam passing away.

‘She continues to prove everybody wrong. She can even read now when doctors said it wouldn’t be possible.  When Felicity was born we so nearly lost her but now look at her. She is our miracle child. 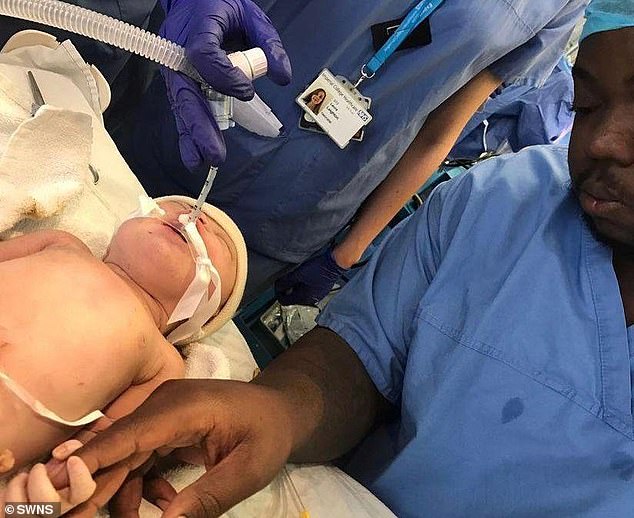 She developed cerebral palsy, which is a lifelong condition that affects movement and coordination. 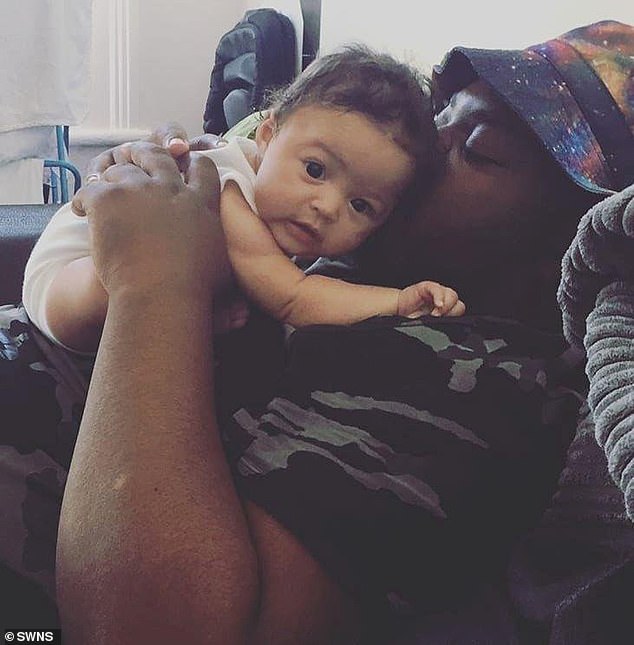 Her father Adam became her best friend and cared for the youngster, who has since learnt to walk again 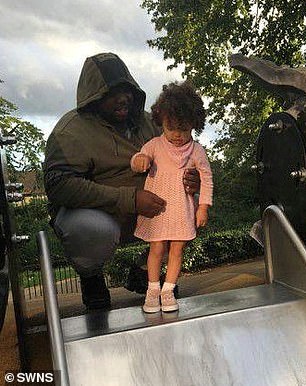 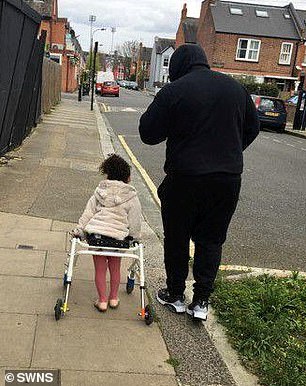 Adam died from pneumonia on Christmas Eve last year. He passed away before he was able to see his daughter walk unaided across the living room

‘She has made such progress that we are looking into specialist surgery to improve her walking further.’

Felicity-Rose was born on April 11, 2017, at the Queen Charlotte’s and Chelsea Hospital in Hammersmith, west London.

Her mother had a normal pregnancy but mistakes by doctors which led to a delay in her getting a caesarean section, resulted in Felicity-Rose being starved of oxygen.

What is cerebral palsy?

Cerebral palsy is a group of lifelong conditions affecting movement and coordination.

It’s caused by a problem with the brain that develops before, during or soon after birth.

The severity of symptoms can vary significantly.

Felicity-Rose was not breathing when she was born and had to be resuscitated.

Since walking across their living room with no assistance she has also learnt to ride a tricycle and can even dance the Macarena.

Amber’s legal team from Osborne Law is looking at getting Felicity-Rose selective dorsal rhizotomy surgery at Great Ormond Street Hospital, which could reduce stiffness in her muscles.

The law firm has secured a substantial interim payment from Imperial College Healthcare NHS Trust to pay for rehabilitation, care and specialist equipment.

The Trust said care provided for Felicity-Rose ‘fell below the appropriate standard during her mother’s labour in the period running up to her birth’.

It added: ‘With the care of the proper standard, she would have avoided sustaining such neurological damage’.

The family’s solicitor Jodi Norton said: ‘Felicity’s story is inspirational and she continues to amaze us all with her astonishing progress.

‘We are grateful for the Trust’s continued support and for the recent interim payment of compensation, which will have a huge impact on [her] life and enable her to continue with her rehabilitation.’