This concert by the superb English choir Tenebrae, conducted by Nigel Short, focused on the intense purity of the music of Renaissance master Tomas Luis de Victoria. This was double apt.

Most obviously, their name (literally 'darkness') refers to the extinguishing of candles during Christian Holy Week and among the many collections of music for these celebrations by Renaissance composers, Victoria's rank among the highest for their combination of classic counterpoint with sensitivity to the words' expressive demands. 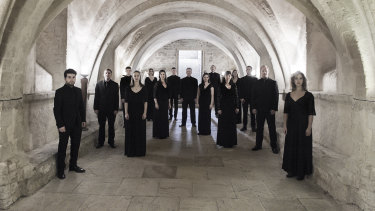 Secondly, and, more importantly, purity of sound and discreet intensity of expression are both Victoria's and this choir's hallmark. Matching tone, vowel sound and shape of line, they wove a web of glorious polyphonic intricacy while enunciating the text with serene expressive clarity, like a pointed truth.

Six of Victoria's four-part Tenebrae Responsories formed the centrepiece of the first half. In the sombre perfection of line and counterpoint of those motets, Tenebrae drew out resonance and dissonance to create a vocal blend of smooth beauty, incandescently edged with the keenness of balance and pitch that derives from close listening. They closed the bracket with the 18th Responsory Sepulto Domino, creating a remarkable aura of hushed quiet and transparent clarity.

The Responsories were themselves framed by the richly lamenting six-part motet Versa est in luctum by Victoria's contemporary Alonso Lobo, and, at the close of the first half, by Allegri's famous Miserere. For that work, famously transcribed from memory by the fourteen-year old Mozart after visiting the Sistine Chapel, the second choir was placed in the City Recital Hall's extreme high gallery. This allowed the apocryphal but delightful soprano phrase that reaches up to a high C to soar (a phrase subsequently found to be a nineteenth century copyist's error but retained as a mistake that was a stroke of genius).

The second half was given over entirely to Victoria's six-part Requiem Mass, written for the funeral of his patron the Dowager Empress Maria of Spain and one of the great masterpieces of Renaissance music. The work blends polyphonic textures with chordal sections in which Tenebrae showed a capacity to highlight words through emphasis without harshness, accent without force.