A taxpayer-funded community legal centre model could be used by the federal government to back defamation actions launched by private citizens under proposed anti-trolling laws to be released this week.

The draft legislation is aimed at forcing social media companies to unmask anonymous trolls who defame people online, with the federal government indicating it was prepared to financially back test cases in the courts. 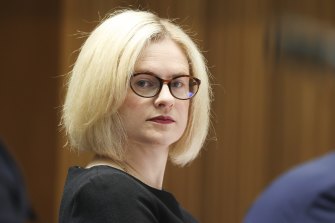 Assistant Minister to the Attorney-General Amanda Stoker said the government could use a community legal centre model to intervene in private defamation to unmask anonymous trolls.Credit:Alex Ellinghausen

Asked whether the government intended to use a CLC or Legal Aid model to enforce the proposed laws, Senator Stoker said: “I think that’s the most useful analogue.”

But it is unclear how this would work, including what criteria the government would use to select cases and what measures would be in place to ensure the process was not politicised. An exposure draft of the legislation will be unveiled later this week.

Prime Minister Scott Morrison said on Sunday the government would be looking for test cases to reinforce the laws. He said the current proposal did not involve establishing a new, publicly funded office to intervene in cases but the idea remained “under consideration”.

The federal attorney-general already has a right to intervene in cases that raise constitutional questions, such as the Commonwealth’s abortive attempt to back Clive Palmer’s challenge to Western Australia’s border closure last year, or deal with some key pieces of legislation. The attorney-general can also request a court’s permission to intervene in other matters where it is in the public interest, though that power is used sparingly.

However, in those cases the government does not typically advise aggrieved people directly like a legal centre does, instead briefing its own lawyers to appear before the court.

A key feature of the proposed laws is a new Federal Court order to require social media giants, including Facebook and Twitter, to disclose the identifying details of trolls without their consent to victims, enabling them to take defamation action. These details could include an email address or mobile phone number of the user behind an anonymous account.

If the companies refuse or are unable to identify who made the defamatory comments, they will be held liable for the comments.

In Parliament on Monday, Mr Morrison said the legislation “means that everybody should identify themselves online … when they are making statements or posts”.

Under existing law, people can already seek an order from the court for a social media company to reveal the identity of the person behind a post during the legal process known as preliminary discovery. But Senator Stoker said this process was expensive, “difficult and cumbersome”, with the new court order designed to make it easier.

The draft laws also fuelled a messy dispute between two federal politicians on Tuesday, with Liberal senator Sarah Henderson accusing Labor MP Libby Coker of being associated with an anonymous Twitter account that had denigrated her online.

Speaking at a press conference, Senator Henderson said one of the accounts had posted during a 2016 candidates’ forum that she looked like a 1960s air hostess, prompting another attendee at the event to say to Ms Coker that if she had anything to do with the post, it should be taken down. It was then removed. Senator Henderson said Twitter had refused to provide details of who was behind the account.

“There is compelling evidence that Libby Coker has some direct or indirect association or control of one of these accounts,” Senator Henderson said, repeating the claim she made last year under parliamentary privilege.

Ms Coker, who defeated Senator Henderson for the seat in 2019, vehemently rejected the claim in a statement, saying it was “offensive, untrue and potentially defamatory”.