Disney+ scored big with its debut of "Hamilton" on July 3 — bigger than anything streaming supergiant Netflix put out that same month.

Variety Intelligence Platform exclusively obtained numbers from 7Park Data that point out a massive margin between the viewership of the filmed musical and other popular content from major streamers each month.

37% of the researcher's panel of American viewers reported having watched "Hamilton," while the next highest percentage went to Netflix's "Unsolved Mysteries," which under 14% reported having viewed.

'HAMILTON': WHAT TO KNOW ABOUT THE MUSICAL STREAMING ON DISNEY+

Additionally, 7Park's numbers do not include mobile viewing, and Apple TV+'s Tom Hanks vehicle "Greyhound" was also not included.

The musical's audience also serves as the largest amassed by a single program over the course of a month this year, per 7Park Data's reporting of Disney+, Netflix, Prime Video, Hulu and Apple TV+ — other streamers like HBO Max and Peacock were not included.

The outlet also shared the same data for June, in which the title with the highest percentage of viewers — Netflix's "Space Force" — reached only 8.3% of the panel.

While Disney doesn't offer exact viewership numbers on its streaming titles, CEO Bob Chapek has reported that "Hamilton" spurred a boost in subscriptions to the streaming service.

Similarly, app analytics firms reported a massive jump in downloads of the Disney+ app, tracking downloads to be over 70% higher than the average over the four weeks in June.

7Park uses a census-balanced panel from between 15,000 and 25,000 US households to track unique viewers on a daily basis, as well as how long viewership of a title lasts. 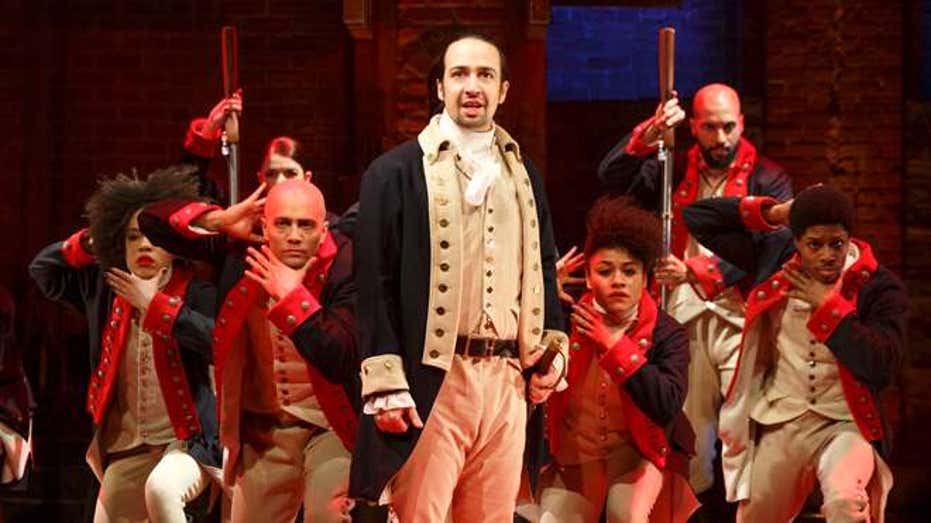 Lin-Manuel Miranda with the cast during a performance of ‘Hamilton’ in New York. (Joan Marcus/The Public Theater via AP)

The data showed that people spent more time watching "Hamilton" in July than they did streaming staples like "Grey's Anatomy" and "The Office."

Such data is especially surprising considering the number of hours of "Grey's Anatomy" and "The Office" far surpass the 160-minute runtime of "Hamilton."

However, 7Park also measured that panelists spent an average of 510 minutes on Netflix throughout the month, while an average of only 246 minutes being spent on Disney+ — a testament to the streamer's domination over the video-on-demand market, even in the face of stiff competition.

Numbers are sure to change in the coming months as "Mulan" will hit the streamer in September while season two of the Emmy-nominated series "The Mandalorian" will also likely draw more viewers and subscribers in October.