The Australian production of Hamilton managed to break box office records before the show had even kicked off in Sydney, with over 250,000 tickets sold before the first preview on Wednesday.

Speaking on The Age and The Sydney Morning Herald’s Please Explain podcast, the show’s original Broadway producer Jeffrey Seller confirmed it was a record for musical theatre ticket sales in Australia. “We’re not just confident [that audiences will see the show], we are sure of it because we know how many tickets we have sold,” Seller said. “It’s the largest advance in the history of Australia.” 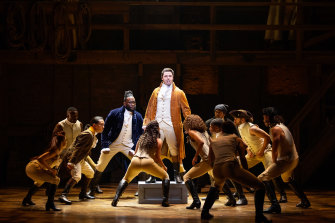 Jason Arrow and the Australian cast of Hamilton.Credit:Daniel Boud

Sources close to the production, who wished to remain anonymous because they weren’t authorised to speak publicly about sales, confirmed the production had sold more than a quarter of a million tickets before the first preview.

That means more than $40 million has been spent at the box office since tickets for the show went on sale in August, eclipsing ticket sales from other popular productions such as The Lion King, Phantom of the Opera, The Book of Mormon and Wicked. Ticket sales are generally a closely-guarded secret in the live performance industry, with producers reluctant to reveal how well shows are selling unless they have a hit on their hands.

The show will open at the Sydney Lyric Theatre next week to full houses, after it was one of the first productions to get approval  from NSW Health to stage 100 per cent capacity performances.

The sales put Hamilton in the same ball park as Australia’s other biggest show, the play Harry Potter and the Cursed Child, which sold 200,000 tickets in its first four days of pre-sale. However the numbers for Harry Potter are impacted by the fact each audience member is required to purchase two tickets – one for each performance of the two-part show.

Both Hamilton and Harry Potter are produced in Australia by Michael Cassel, placing him in charge of the two most commercially successful productions in the country.

Tickets for Hamilton start at $70 and go up to $350 for premium seats. There is also a weekly ticket lottery people can enter each Friday to access a handful of $10 tickets for the next week’s performance. The show is currently selling seats for up until September with an extension much beyond that challenging for producers given Sydney’s lack of theatre space.

Hamilton, which premiered on Broadway in 2015, is written by Lin-Manuel Miranda and tells the story of America’s once-forgotten founding father Alexander Hamilton. Hamilton rose from poverty to become an indispensable aide to George Washington during the American Revolutionary War before becoming the first treasury secretary of the United States.

Miranda’s musical has been roundly acclaimed by critics and audiences alike for its use of rap, hip-hop and R&B music, as well as its diverse casting.

An exhaustive talent search in Australia led to more than 30 ethnically-diverse performers being cast in the production, including Jason Arrow as Alexander Hamilton, Chloe Zuel as his wife Eliza and Matu Ngaropo as George Washington.

Hamilton’s opening night is on March 27.

Our supporters power our newsrooms and are critical for the sustainability of news coverage.

Becoming a subscriber also gets you exclusive behind-the-scenes content and invitations to special events. Click on the links to subscribe to The Sydney Morning Herald or The Age.