Harry will be a natural born daddy, say RICHARD KAY and GEOFFREY LEVY

Princess Diana’s most moving legacy was teaching her son Prince Harry how to be a natural born daddy, say RICHARD KAY and GEOFFREY LEVY 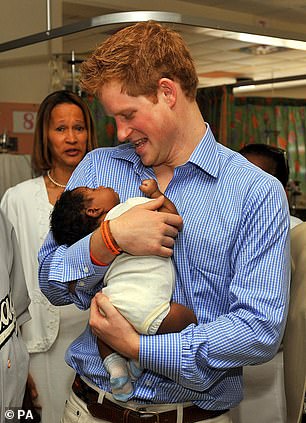 Gently does it: Harry cradles newborn Jean-Luc Jordan at the Queen Elizabeth II Hospital in Bridgetown, Barbados, in 2010

So here at last is the moment that Prince Harry admits he has been longing for since he was ‘very young’.

Not a common yearning in the younger generation, most of whom are having their first child later and later these days.

Imagine his excitement now, and the easing of his envy of William.

Like his elder brother, Harry, too, is a family man at last. How poignantly that word ‘family’ sits on him.

For while the early death of Princess Diana bestowed a steely independence on the then 15-year-old Prince William, it had the opposite effect on Prince Harry, then 12, plunging him into a cycle of gloom.

He never really broke free until he met Meghan. Now that rehabilitation is, surely, complete, with the arrival of a baby boy.

No one observing the 34-year-old prince’s interaction with children all over the world in recent times can have many doubts about the kind of father he is likely to be — attentive, concerned, patient, and full of fun — a big kid himself. 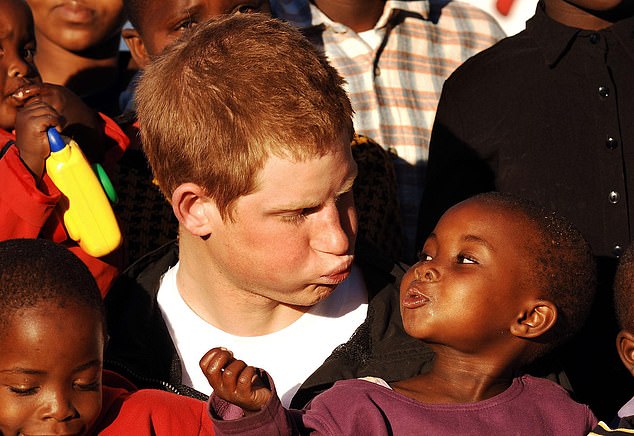 Blowing bubbles: Prince Harry makes faces with Lintle at a children’s home on his return to Lesotho in 2006 to launch his charity Sentebale

One clergyman close to the Royal Family for three generations has watched Harry since he was a child, and says: ‘One thing Harry will never be is an absentee father. He will want to be involved with everything — even changing the little one’s nappies.’

Like William, Harry has emerged from the wreckage of his parents’ acrimoniously shattered marriage determined that his own children would never suffer similarly.

He sees the bringing up of his and Meghan’s baby, and any that follow, as a modern partnership, probably spending as much time in the nursery as his wife.

He has already told friends that he intends to do his share of getting up in the night to help.

This is everything that Harry has always wanted but there are dangers.

Even the priest acknowledges —albeit with a smile — that Harry’s broken family background is likely to make him an over-indulgent father. 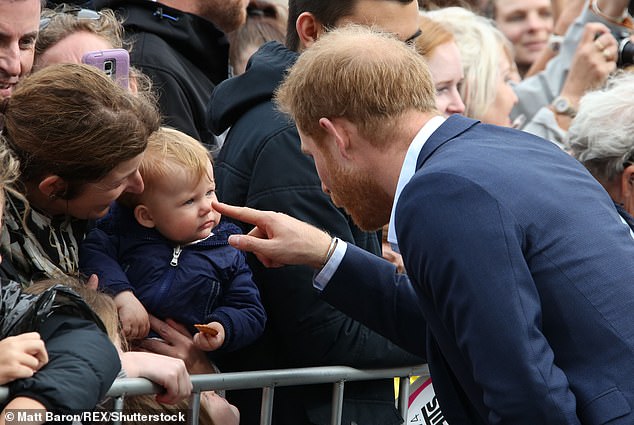 Prince of fun: The child in Harry was never more apparent than when he made time to entertain the babies in the crowds during his and Meghan’s royal tour of New Zealand last year

‘This happens all the time,’ he says. ‘And here we have two parents from broken homes.’

And yet the general feeling among their friends is that Meghan will be the ‘firmer’ parent, laying down the law when Harry takes a softer line.

It must be said that although Charles and Diana were besotted parents, they could scarcely have been called hands-on. Even so, Harry has many wonderful memories of his own childhood.

From the moment of his birth, there was a nursery nurse, nannies and other domestic staff ever ready to take charge.

When they first became parents, Diana had to insist on Charles making time to visit the Kensington Palace nursery, morning and evening. It had to be written into his schedule.

‘With Harry, the problem will be keeping him out,’ quips one of their close friends. ‘He loves kids.’

So will fatherhood change Prince Harry? Intriguingly, William has admitted that it certainly changed him. 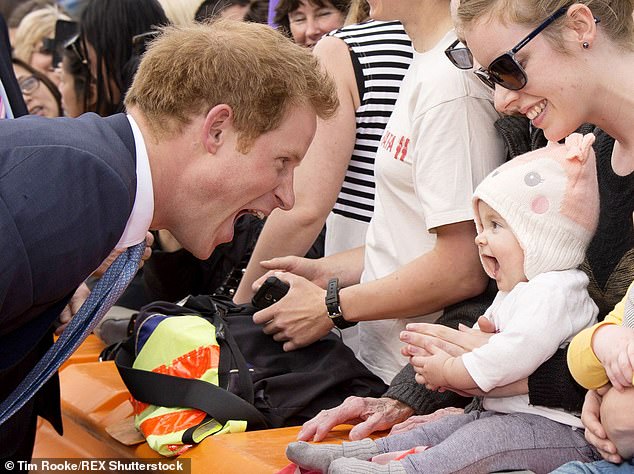 No one observing the 34-year-old prince’s interaction with children all over the world in recent times can have many doubts about the kind of father he is likely to be — attentive, concerned, patient, and full of fun — a big kid himself. He is pictured above in Christchurch, New Zealand in 2015

‘I’m a lot more emotional that I used to be, weirdly,’ he said when his second child, Charlotte, was born in 2015.

‘Now the smallest little things, you well up a little more, you get affected by the sort of things that happen around the world or whatever, a lot more, I think, as a father.’

One could certainly attach those thoughts, too, to Harry, who in March made an impassioned speech to 12,000 youngsters at Wembley Arena about the dangers to the world of climate change. 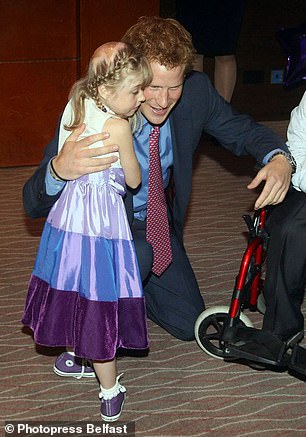 When Hope met Harry: This Is the moment five-year-old Hope Hillis from Lisburn, who endured more than 50 major operations, gave the Prince a lick on his right cheek when they met in 2012

The impending birth of his own child was clearly on his mind when he told them: ‘Every blade of grass, every ray of sun and every raindrop is crucial to our survival.’

With his child having an American mother and grandmother, Harry has already privately made it plain that he expects him to be a ‘citizen of the world’ rather than to have a central role in royal life, despite being seventh in line to the throne.

It’s very much in keeping with this that the baby’s arrival was not instantly announced to an excited world.

Similarly, their original plan for a home birth (which would not follow recent royal tradition) was seen at the time as the laying down of a marker that things were going to be different.

Harry was determined that Meghan should avoid the circus of publicity that surrounded the birth of all three of William’s children. So it is perhaps, symbolic of the future that Meghan’s mother, Doria, who has been staying with the couple at Frogmore Cottage (their new home in Windsor Great Park) saw the new grandchild before the Prince of Wales.

The same happened with William’s first child, when Carole and Michael Middleton got a peep at Prince George, now five, before either Prince Charles or the Queen.

Like Kate and her mother, Meghan and Doria, who was her sole family member at the couple’s wedding, have the warmest mother-daughter relationship.

Harry has also become very fond of Doria and is determined that as his child’s only grandmother, she will have a meaningful role in the baby’s upbringing.

It must surely be likely that Baby Sussex will spend at least part of his schooling in America — something Diana hoped would be the case for both William and Harry.

Harry’s memories of his own childhood include very different experiences with his mother and with his father.

Princess Diana’s informality, even in public, scooping him and his brother up into her arms and taking them to theme parks has made a lifelong impression on him. 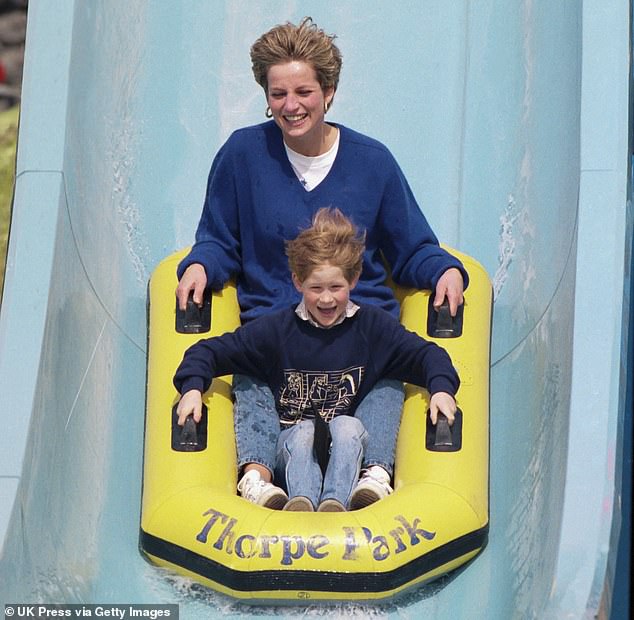 Hold tight: Diana and seven-year-old Harry enjoy the thrills of Thorpe Park. Like his elder brother, Harry, too, is a family man at last

When the time comes, he’ll want to tell his first-born, and any who follow, all about the wonderful grandmother they never knew.

Unlike Diana, though, Charles has always been awkwardly formal in public with his children.

Typically, when he took Harry, then 13, to meet the Spice Girls backstage after a concert in South Africa, the star-struck boy had to wear a jacket and tie.

Some said, wrongly, that this showed Charles to be a cold-fish father.

In fact, he was just as demonstrative as Diana, but only in private. 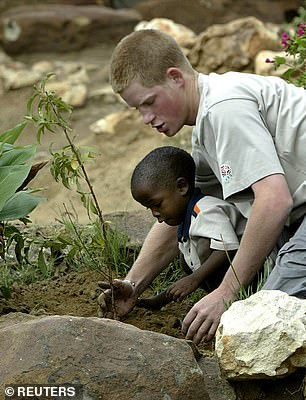 Gap year: Harry helps Mutsu plant a tree at a children’s home in Lesotho in 2004

His valet was always having to clean sheep droppings off his suits. The reason?

Whenever Charles arrived by helicopter at Highgrove when the children were small, they would rush out to greet him across a field of grazing sheep.

As he swept them up into his arms, everything they had trodden in en-route was transferred to his clothes.

No one expects Harry to take his father’s approach with his own children in public. He has inherited the tactile informality of his mother.

The way he gets down on his knees to the level of small children is so reminiscent of Diana.

So we can expect to see Prince Harry carrying his toddler son on his shoulders, and romping in the sand by the sea.

A key question will be how independent the young family will be in their relatively isolated home, 30 miles from the bustle and attention of the capital.

Having her mother at Windsor for the early days will be crucial for Meghan, who will be 38 in August. For she and Harry are understood to want to stave off having a full-time nanny for as long as possible.

Eventually, however, Doria will return home to her own life in California, where the former make-up artist has most recently worked as a yoga teacher and social worker. 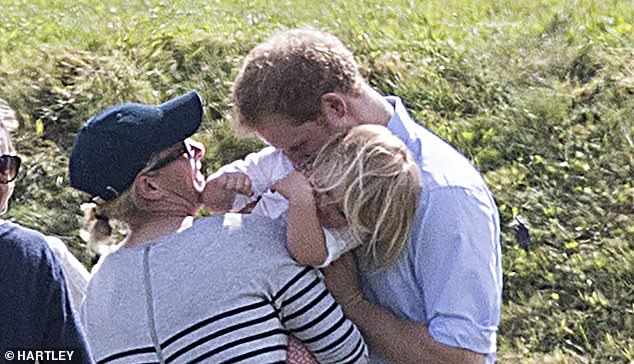 Harry tickling his two-year-old cousin Mia Tindall. He sees the bringing up of his and Meghan’s baby, and any that follow, as a modern partnership, probably spending as much time in the nursery as his wife

The zeal with which Meghan has joined Harry in humanitarian campaigning will ultimately force them to employ full-time help.

Unlike William and Kate, for whom the very capable and willing ‘Granny Carole’ was always on hand to help, Harry and Meghan will be left with just one blood grandparent — Charles. Not exactly the ideal choice as a babysitter!

Certainly, Charles will hope to be more involved with his fourth grandchild than he was with the first three, when, at times, he complained that he felt he had been excluded.

Happily, he has a much warmer relationship with Harry than he does with William.

As for Harry’s paternity leave, he is said to be keen to have as much time as possible. Aides have been told that he might want to take a month off. And he will want to cherish every minute of it.