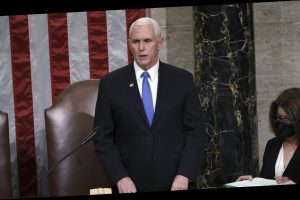 Breaking with tradition, Donald Trump will not attend President-elect Joe Biden’s inauguration on Wednesday, January 20, 2021. Instead, USA Today reports that he’ll head to Florida shortly before the ceremony begins.

Rather than participating in the typical peaceful transfer of power, Trump will hold his own departure ceremony at Joint Base Andrews in Maryland on Wednesday morning. Trump’s event will be held right before he leaves the nation’s capitol and Biden is sworn in as the 46th president of the United States, according to Business Insider. But a key member of the Trump administration will be absent: Vice President Mike Pence.

On Tuesday afternoon, Washington Post reporter Josh Dawsey tweeted that White House officials had stated Pence wouldn’t attend Trump’s departure ceremony. “He is attending the inauguration later in the day, and aides say it would be logistically challenging for the vice president to do both,” Dawsey reported.

Mitch McConnell and Kevin McCarthy, the top Republicans in the Senate and House, are also skipping Trump’s farewell, according to Business Insider.

Pence and Trump's relationship has rapidly deteriorated in recent weeks

Pence stood by Trump through four years of a tumultuous presidency, but the relationship between the two has rapidly deteriorated.

The breaking point came when Trump asked Pence, who was in charge of affirming the electoral vote count on January 6, to overturn the results (via The New York Times) — something that is not within Pence’s power. On the morning of the official count, Trump held a rally during which he harshly criticized Pence for not carrying out his command.

Shortly thereafter, insurgents stormed the Capitol. The Times reported that the vice president was evacuated to safety and Trump took to Twitter where he continued to excoriate Pence.

In the days after the deadly attack on the Capitol, the two men didn’t speak and, according to USA Today, Pence announced that he planned to attend Biden’s inauguration. He also contacted Vice )resident-elect Kamala Harris for the first time since the election to congratulate her.

For many, Pence’s refusal to follow Trump’s demand that he break the law was far too little, too late. “[I]t’s kind of hard to call somebody courageous for choosing not to help overthrow our democratic system of government,” Rep. Tom Malinowski told the Times. “He’s got to understand that the man he’s been working for and defending loyally is almost single-handedly responsible for creating a movement in this country” that has violent intentions against Pence.