How Spider-Man: No Way Home became one of Australia’s biggest box office hits

It arrived a week early but Spider-Man: No Way Home has been the perfect Christmas present for cinemas battered for two years during the pandemic.

Marvel’s latest superhero movie, which stars Tom Holland as the teenage webslinger and Zendaya as girlfriend MJ, has moved from box office hit to cultural phenomenon in three weeks.

Taking $58.3 million, it is already the sixth biggest hit at the Australian box office. Hoyts chief executive Damian Keogh expects it to move past Avengers: Infinity War ($62 million) and The Lion King ($64.1 million) into fourth place. 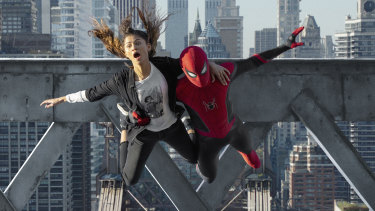 Zendaya and Tom Holland in Spider-Man: No Way Home.Credit:Sony Pictures

While still a long way from the phenomenal success of Avatar and Star Wars: The Force Awakens, it is a surprising result for a movie that that seemed to be much less hyped than most Marvel releases and has screened as Omicron cases have surged.

It is also the ninth Spider-Man movie in 20 years. After three for Tobey Maguire, there have been two for Andrew Garfield, one voiced by Shameik Moore that won best animated feature at the Oscars, and now three for Holland.

Directed by Jon Watts as the final part of the Homecoming trilogy, this instalment has Spider-Man battling such past foes as the Doc Ock (Alfred Molina), Green Goblin (Willem Dafoe) and Electro (Jamie Foxx) when a spell by Dr Strange (Benedict Cumberbatch) cracks open the so-called metaverse.

The last movie that was the great hope to bring fans back to cinemas, No Time To Die, was considered a success for taking $34.5 million.

The managing director of distributor Sony Pictures Releasing, Stephen Basil-Jones, said Spider-Man would take more than double that with at least $70 million. Around the world, it has taken $US1.37 billion ($1.9 billion) to become the biggest hit since the pandemic started.

“It’s a very well-made film,” he said. “We thought it would be the best Spider-Man [at the box office] but it’s well and truly surpassed that.”

Unlike many comic book superhero movies, Mr Basil-Jones thought audiences were caring about the characters. “That’s what great movies do: they move you,” he said.

Also contributing to the success has been the social media popularity of Zendaya, The Greatest Showman and Dune star who has 120 million followers on Instagram, and her real-life romance with Holland.

“For young girls – that 10 to 17 category – Zendaya is right in their wheelhouse,” Mr Basil-Jones said.

Every other major Hollywood movie released during Christmas has been over-run by Spider-Man.

After last weekend, the animated Sing 2 had earned just $7.5 million, The Matrix Resurrections $5.1 million, West Side Story $1.8 million and Licorice Pizza a dismal $356,000. 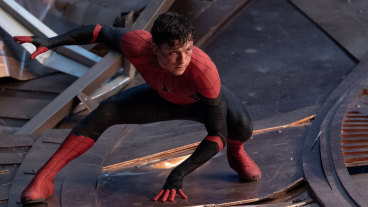 Mr Keogh said Spider-Man had been particularly popular with teenagers to under-40-year-olds before Christmas but had kept selling tickets as COVID-19 numbers jumped.

“It’s resonated with a lot of people who haven’t been to the cinema for a long time,” he said. “We know from experience when a movie gets to [$50 million] plus, people are going to see it multiple times.”

The results showed the power of Marvel franchises and fan enthusiasm on social media.

“It certainly had a good marketing campaign but there was a lot of underground communication about the movie,” Mr Keogh said.

The general manager for film and content at Event Cinemas, Claire Gandy, said Spider-Man had been a rare movie, attracting whoops and applause during multiplex screenings.

She thought there had been great nostalgic interest – spoiler follows – in Maguire and Garfield returning as earlier versions of Spider-Man.

“Having the older Spider-Mans back has been a huge benefit,” she said. “And it was really well done. When Andrew Garfield catches MJ, that’s a huge moment for the audience.”