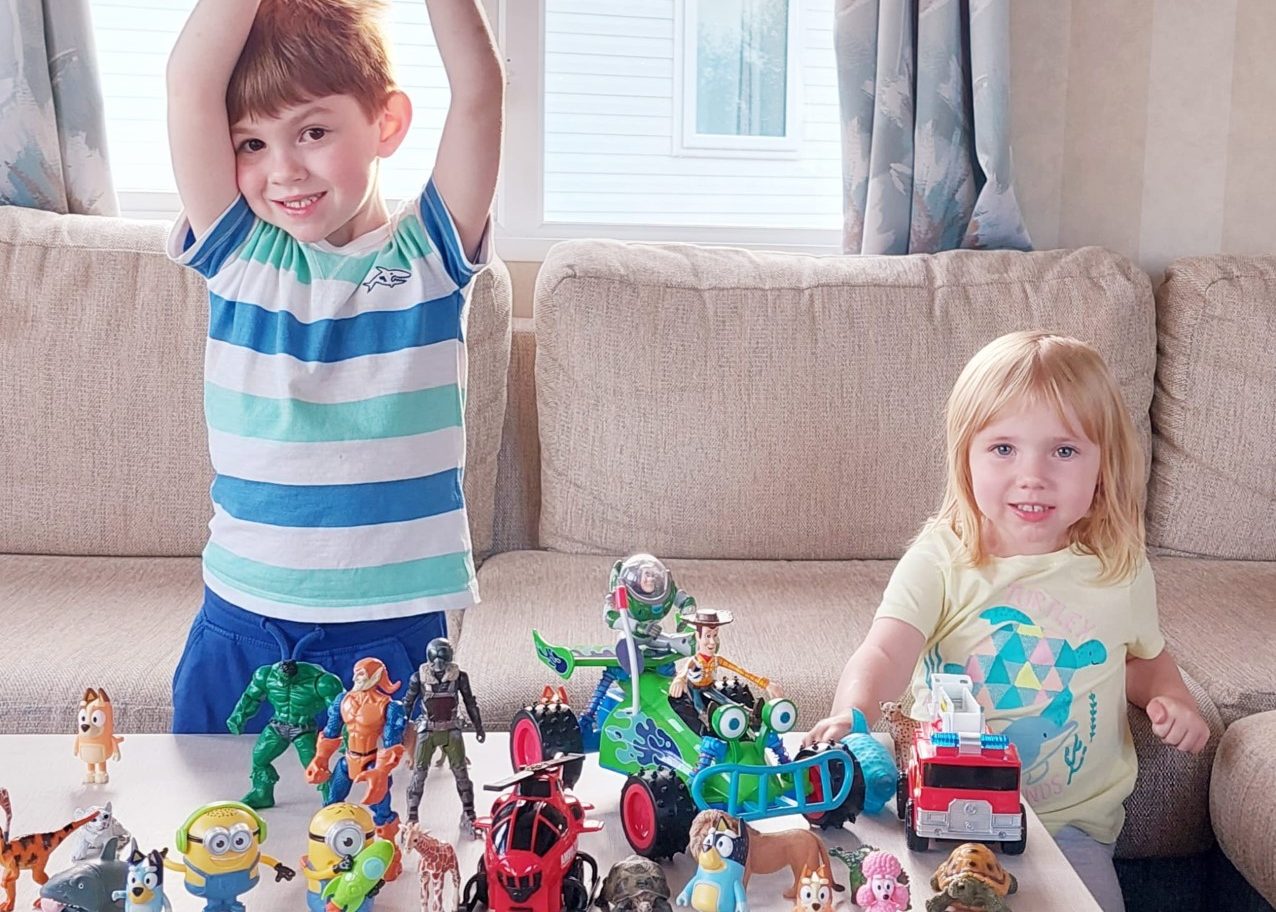 Looking at the huge pile of superhero figures, matching vehicles and other kids’ ‘accessories’, my husband Tom shook his head.

‘Where are you planning to put all of this?’ my dad then asked, laughing. It was a good question.

Having sold our flat in London but not having the keys to our new house in Gateshead yet, me, Tom and our two kids had relocated up north – near my parents – to an Airbnb with only a rucksack and suitcase between the four of us.

The rest of our things had been sent to storage, as we moved into a two-bed house for seven weeks. That meant we had no access to a garage, a loft or, indeed, any other place to put early birthday and Christmas presents.

The thing was, I just couldn’t resist a bargain and so when I’d seen the huge bundle of Imaginext toys on Facebook Marketplace that the seller was willing to deliver, I could hardly say no, could I?

Well, that was exactly what my husband said that I should say.

But the thing was, I could see the parcel was big enough to be split between my soon-to-be four-year-old son Theo’s birthday and Christmas (and it turned out, end-of-the-week bribes when he had done extra-well brushing his teeth).

Not only would he be delighted by his huge influx of toys, we would save a load of money compared to buying the toys new (in fact, we’d never have been able to afford that many new toys, so he just wouldn’t have got them) and the mum who was selling them was passing on the money to her twin boys to buy some new computer games.

Oh, and the plastic didn’t end up in landfill. Everyone was a winner, right?

I’m a relatively recent convert to buying second-hand clothes and toys. As a child, we had no relatives to pass down clothes, so me and my sister Laura were always lucky enough to have new ones.

And in sixth form, I got my first job two weeks after my 16th birthday, so I always had money to buy my own clothes, which I did in abundance. When I started going out clubbing, I had a new outfit every week.

The idea of going into a charity shop and looking for items wasn’t something I ever considered. Looking back, I was probably a bit snobby. I could afford new, why on earth would I buy second-hand?

Yet, when I had Theo, my sister was delighted. ‘I’ll start bundling up all of Seth’s clothes for you to have,’ she told me excitedly, referring to her son, who is two and a half years older than Theo.

Only when I had my own children did I realise why she was so happy – children grow out of clothes so quickly and then you’re stuck with what to do with the tiny outfits that mean so much to you but that you can’t possibly keep, no matter how much you want to.

Now, my sister is one of these people who turned up at the Next sale at 5am, coming out with bags full of clothes for her children.

That meant that I was getting full wardrobes of clothes, all still in amazing condition, because they’d hardly been worn. And although I’d give her £30 or £40 to treat Seth to something new, I was still saving so much money.

It was my first real glimpse of the glamour of pre-loved clothing – and I was hooked. In lockdown, I became addicted to scouring the internet for cheap train tracks and animals, to feed my son’s new passions.

Every other day, another parcel would arrive and Tom would raise his eyebrows.

‘You’re not on maternity leave with two children to entertain while being stuck indoors,’ I’d hiss, which was generally enough to soften his disapproving expression.

And I think that phrase – pre-loved, which is so often used now – shows it’s not just me who has undergone this shift in perception. All of society seems to be more open to the idea of buying pre-loved, second-hand, used items – whatever you want to call them.

The rise of online stores like eBay, Vinted and Music Magpie show just how popular already used possessions are.

And while I buy mostly clothes for both of my children – I currently have two huge bundles I bought for £20 each from eBay for my little girl, Immy, ready to unpack in my spare room – and toys, other people buy all sorts of things.

I know people who scour charity shops and find designer clothes with their tags still on. My best friend bought a Jenny Packham wedding dress only on the condition that she could find a seller for it afterwards to recoup some of the costs – and she did.

I’m part of Facebook groups where people sell their used Mulberry handbags for hundreds of pounds – I can never believe how quickly they are snapped up. And just this week, a colleague was so chuffed when he found a sofa for £30 that he was pretty much stopping strangers on the bus to tell them about his bargain.

It’s become such a phenomenon that Oxfam has jumped on it, creating Second Hand September, which encourages people to only buy used items for 30 days.

This year, with the rising cost of living, energy prices about to soar and the threat of a recession, I can’t see the charity shop’s campaign being more popular. And with less things going into landfill, it can only be good for the environment too.

The only person I feel may be alarmed by this is Tom, when he sees just how much second-hand shopping I’ll be indulging in.

All in the name of charity, of course.