Home » Lifestyle » 'I felt like a failure, but it was school who failed me'

'I felt like a failure, but it was school who failed me'

During the Easter holidays last year, five-year-old Harry had a panic attack and said he didn’t want to live any more.

‘He was saying he didn’t have any friends and that he was ugly,’ remembers his mum, Sophie*, who adds that of course neither was true. Her son then told her: “I want to die mummy.”’

Hearing these words from anyone is hard enough, but from someone so young is harrowing, especially in the knowledge that suicide is the main cause of death in people under the age of 35 in the UK.

Harry had experienced a period of ill health and gone through a number of traumatic procedures and an operation, followed by lockdown and all the disruption to his schooling that that entailed. He lost all his confidence and was overcome with fear.

His mum recalls how her little boy didn’t even want to go outside because he was scared of his own garden. Then last spring the anxiety attacks started.

‘He starts feeling sick, and he gets a tummy ache,’ explains Sophie. ‘Then his breath becomes shorter. And he starts thinking that he can’t do anything. He will say things like “my brain is telling me that I’m not good enough”. You can see him, his head is shaking – it’s like he’s trying to knock the thoughts out of his head.’

It was a horrific time for the whole family and Sophie worked with his school every day to find a solution.

‘His teachers were phenomenal and we were all trying to learn together to understand how we could help him,’ she tells Metro.co.uk. ‘The learning support assistant would take him outside when he started having a panic attack and they’d look at the trees and do some sort of mindfulness stuff and together we developed strategies.’ 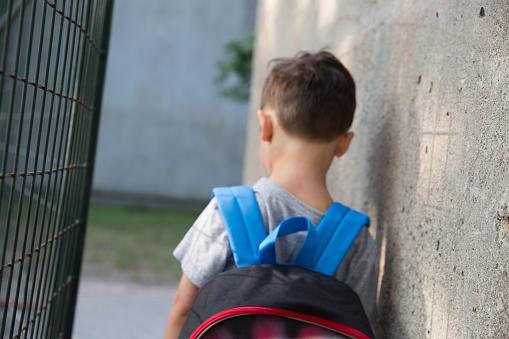 Harry had private therapy, and though he still experiences excessive worry and anxiety, he is on the road to recovery. But Sophie has been frustrated – and at times furious – about the lack of support she has been given from the school’s senior management.

She feels insufficient steps were taken to support Harry as he moved up a year, and when she tried to intervene, she was told she was ‘pandering’ to her son. His panic attacks increased during the transition.

‘Schools need to know anxiety has to be recognised as a condition. It’s an illness that needs to be taken seriously,’ says Sophie.

‘They need to listen to the parents and understand what is going on with children. Mental health is sometimes seen as a tick box exercise.’

More than 200 school children take their own lives every year in the UK, according to the charity PAPYRUS Prevention of Young Suicide, and suicides among teens have been on the increase for more than a decade.

Research done by the charity earlier this year revealed that children want their schools to teach them about mental health and wellbeing to help them survive life.

‘Having returned to school after almost two years of unimaginable uncertainly and disruption to their lives, children are telling us they need to know how to better protect themselves when they are struggling,’ explains Ged Flynn, Chief Executive of PAPYRUS.

“The pandemic impacted on their mental health and they are now reaching out for information which would mean they were better informed, able to identify when they are at risk, how to stay safe and where to get help.

‘In our research, schools and education were mentioned spontaneously as the biggest cause of stress and anxiety across all age groups and yet schools can also help to lead a generation of bewildered children out of the darkness and into safety.’

Benjamin* is 11. He started his secondary education in September, and has been let down appallingly by his school which has consistently failed to provide the empathy and understanding he so desperately needs, his grandmother Samantha* says.

Benjamin has a history of trauma, bereavement, social, mental, education and health (SMEH) needs and has been experiencing depression and suicidal ideation. He has recently made two worrying attempts to hurt himself while at school.

Despite the involvement of social workers, Child and Adolescent Mental Health Services (CAMHS) and his doctor, Benjamin has been continually punished for his behavioural issues with detentions and sanctions.