Home » Lifestyle » I stand with Jada: Alopecia is no joke for sufferers

I stand with Jada: Alopecia is no joke for sufferers

I am a bald woman. What Jada Pinkett-Smith experienced today is what so many young women and girls like me experience every single day. Staring faces, jokes at your expense, and derogatory comments. It’s endless and it’s exhausting.

In a moment of extraordinary Oscars controversy, Will Smith strode onstage and slapped Chris Rock for making a gag about Jada Pinkett Smith’s hairless appearance. Rock joked he was looking forward to GI Jane 2, a reference to Ridley Scott’s 1997 movie in which Demi Moore appeared as a shaven-headed marine. 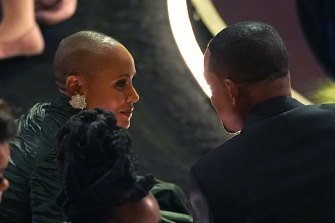 Jada Pinkett-Smith, left, and husband Will Smith at the Oscars.Credit:AP

While I’m not one to promote violence, I’d love there to be some kind of answer to deal with what happens to me daily. I can’t ever walk down the street without strangers physically stopping in their tracks to stare at me. People think they are being discreet when they look at me, whisper, look back and have a giggle.

We’ve learnt not to stare and point at people with a whole range of disabilities. But bald women? That’s a whole other ball-game. A few years ago I had a man at a bar grab my head, then grab his private parts laughing with a mate as if comparing the two. He didn’t speak a word of English, but somehow he still knew how to make a joke at my expense.

When did it become OK to crack jokes and embarrass those who don’t fit the mould? How hard is it to show some compassion for those around you?

Every single one of these interactions has a long and lasting impact on a person. It shakes you. It destroys your confidence. No wonder so many people hide who they truly are out of fear of being judged and ridiculed. And no wonder so many of us decide to stay home or pretend we are something we are not.

I lost my hair very suddenly aged 23 thanks to alopecia universalis. I was in a brand-new job and had no time to really process or hide what was going on, so I dealt with it the best way I could, in full view of my loved ones, friends and strangers. I decided I wouldn’t wear wigs or beanies (ok, I wear beanies when I’m cold and wigs if I’m dressing up as Morticia).

I wasn’t prepared for the trauma of hair loss, let alone the just-as-sudden shift of being treated as a second-class human because of how I look – something over which I have zero control.

I’m mostly oblivious to the comments and stares now, but if I see it, I will call it out – every single time – as do my loved ones around me.

There are of course people who really want to know what happened. If people are courteous, I’ll go the full educational on them. Just FYI, this happens to kids too. When I heard about a 12-year-old suiciding because she’d been bullied about her hair loss, I broke.

So good on Will Smith for standing up and calling it out. But violence is never the answer. He’s drawn even more attention to his wife who I know would already have felt self-conscious, much like anyone else with alopecia.

He’s also drawn the attention away from having a serious conversation about why we think it’s funny to make jokes about someone’s medical condition. He could’ve made the same impact by getting up and using his words instead of his hands.