Home » Lifestyle » If nobody else wants the house, is there something wrong with it?

If nobody else wants the house, is there something wrong with it?

When the property market was running hot, home buyers were quick to make the first bid at auction. But now, as the market cools, auctioneers are often met with silence.

Experts say some buyers need to see “social proof” and once they realise another bidder is also serious about the property, they are willing to offer more, even paying well above the price guide. 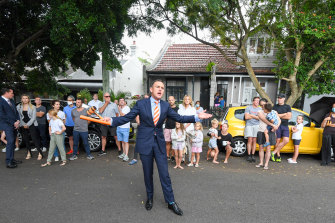 When auctioneers call for an opening bid, some buyers are reluctant to raise their hands.Credit:Peter Rae

At one auction last weekend, a terrace house was about to pass in on a vendor bid when three interested buyers finally raised their hands. On realising their competition, they sent the price soaring another $200,000.

“People are craving social proof, and they feel that there’s a comfort in knowing someone else wants it,” The Agency general manager of Victoria Peter Kakos said. “No one ever wants to be the only one, or the first one.”

He said some buyers now prefer to hold back at auction, let a property pass in and then negotiate privately with the seller because it makes them feel like they are in a stronger negotiating position – even if that is not always the case.

“By human nature, everyone wants to feel they’ve got a good deal,” he said. 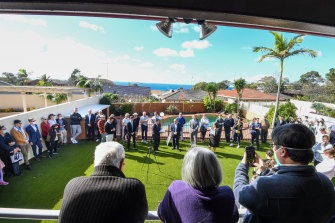 It can take time to draw out an opening bid.Credit:Peter Rae

“As a buyer, you never want to pay more than what you need to, to buy a home, so there’s always that feeling of ‘I just want to make sure I don’t pay more than I have to’.”

He recommended buyers make sure that if a property is going to pass in, it passes in to them, which gives them first right to negotiate with the seller.

AuctionWorks chief auctioneer Jesse Davidson said bidders now are a little more hesitant to start an auction than they were last year, while knockout opening bids are also less common. But he added that buyers always want to see social proof in any market.

“People want to know that they’re not the only person that likes that asset,” he said.

He cited one upcoming auction with two keen parties. One could not get finance in time, and when the agent told the other they would be the only bidder for the home, they asked, “What’s wrong with it?”

He recommends bidders have three clear prices in their head for a property – one that would be cheap, one at fair value and then their absolute maximum.

“Once you hit your top number, stop,” he said. 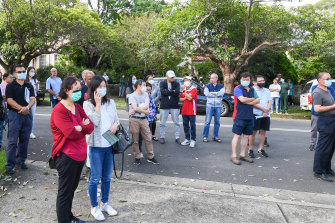 Buyers are encouraged to know someone else likes the same asset.Credit:Peter Rae

Clinical psychologist at The Psychology Suite Dr Arthur Stabolidis said holding back from bidding in a cooling market seems like a rational approach.

“A house is only worth as much as a person is willing to pay,” he said.

“What all agents are trying to do in the market is make you afraid you’re going to miss out on the house you really want. If nobody is bidding, there’s no real fear there.”

On the other hand, he also thought it was rational for a buyer to bid up the price once it became clear they faced competition. 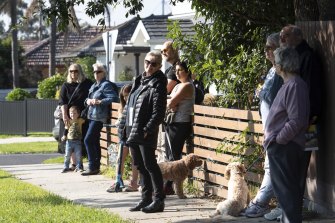 Home buyers want to know they are not paying too much.Credit:Penny Stephens

He advised home buyers to create a list of all the features they desire in a home, then only pay top price for something that ticked every box, and even ask a friend to come along and drag the bidder away from the auction once they hit top price in case the adrenaline becomes too much.

RMIT lecturer in economics Dr Peyman Khezr, who did a PhD on selling mechanisms in the Australian housing market, said a bidder’s optimal strategy depends on the state of the property market.

In a hot market, someone with a high budget who can see they face many competitors might start with a high price and raise it in jumps to signal to other bidders not to waste their time.

In a cooling market, when there are few bidders, a buyer knows 30 to 40 per cent of homes at auctions are passing in and they might only be negotiating with the vendor, so jump bidding makes less sense.

Instead, someone might start with the lowest possible price and raise it by the smallest possible increments to signal to the seller their budget is not high.

“In a cooling market, your expectation is there either won’t be that many competitors. If there are, there will be very few of them, and if there are, their values will be low,” he said.

Seeing others’ interest can help a bidder update the value they place on the property, but if no one else is interested they might doubt their guess – something the academic once did himself when he went to an auction in a hot market and only one person was bidding.

“I said, ‘Maybe there’s something wrong with this’.”