Home » Lifestyle » I’m a 24-year-old that moved from New York City to Ohio to live with my parents during the pandemic. Here’s how my life changed.

I’m a 24-year-old that moved from New York City to Ohio to live with my parents during the pandemic. Here’s how my life changed. 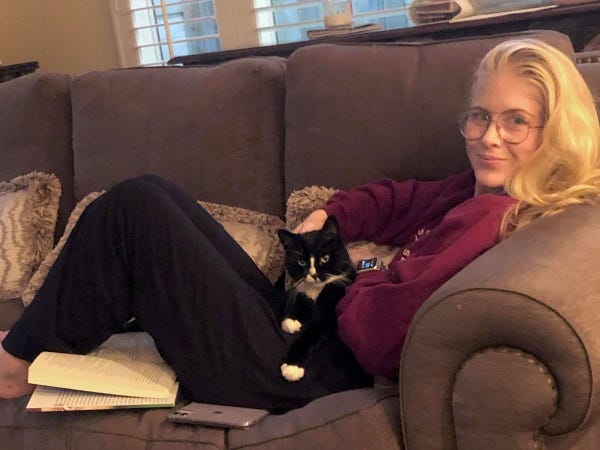 When I flew home in April to stay with my parents in Akron, Ohio, I told myself it was a temporary arrangement.

"You can stay as long as you want," my dad countered.

It was a kind offer. But I fully expected to return to New York City with my cat, Rosie, in a couple of weeks, or another month at most, though I told myself the latter prediction was pessimistic.

My fellowship at Insider wasn't over until June, so I was thrilled to fill my days writing from home. It was a privilege that many other journalists didn't have, as numerous media companies laid off employees and the national unemployment rate spiked.

But while my employment was eventually extended — I'm now a full-time reporter here at Insider — one of my roommates wasn't as lucky. She was laid off from her job in mid-June.

A month later, we made the difficult decision to lease out our apartment, and I stayed in Akron, joining the 52% of Americans in their 20s currently living with their parents. It's the largest number since the Great Depression, according to Pew Research Center.

Despite having every intention of living out 2020 in New York City on my own, my year had taken an unpredictable turn. Now, I'm 24 years old living in Akron with my parents for the foreseeable future.

Moving home can feel like backtracking, or losing precious time

Six months into my new arrangement, I know I'm tremendously lucky. I'm able to save money in a precarious economic environment, and I'm closer to family. I can also write from a full-sized desk rather than a bedroom with no sitting area and a fake wall.

The transition hasn't been seamless, however.

Two years into my life in New York, I'd finally begun to establish my own rhythm, growing accustomed to doing and seeing what I wanted on my own terms. Whether I was sitting down for live music in the park, traveling to and from my new office, or even ordering a burrito in bed at 10 a.m. on a Sunday, I felt like I was in control of my own future.

That old life feels further and further away as I settle into a new routine in Akron, a city that made a name for itself as a leader in rubber production, and then as Lebron James' hometown. From here, I work in the downstairs level of my parent's condo and spend my Saturday nights sitting down for family dinners.

It's easy to get down on myself, especially when movies like "Step Brothers," "Failure to Launch," and "The King of Staten Island" condition us to associate living at home as an adult with laziness and failure. While many of my friends — whom I haven't seen in months — have salvaged some sense of normalcy by surrounding themselves with people our age, I'm taking on the same chores I had in high school.

When you're less than a decade removed from living with your parents, it can be tempting to revert to old habits. It didn't take long for my parents and me to bicker about clothes left on my floor or squabble over who gets the car.

We try to find humor where we can, like when I come downstairs in a ratty middle school T-shirt or unearth a forgotten baby photo. But I feel like I'm losing a formative period of my 20s, especially when I don't know how long I'll be living in an environment that lacks peers my own age.

Instead of trying new things, meeting new people, and figuring out who I am on my own, I've found myself retracing my steps.

Living in Ohio as an adult shifted my long-term priorities

When I lived in New York City, my daily routine — exercising, working, seeing friends, and attending to my cat Rosie — carried me from roughly 6 a.m. to 10 p.m. By the time I left the city, I'd become so used to its unpredictable nature and fast pace that I questioned other people's decisions to exist anywhere else.

Now, I've been forced to slow down, and while the day itself is shorter — I wake up at 8 a.m. (on a good day) and go to sleep by 10 p.m. — the downtime makes it feel much longer. While my working hours are similar, with no friends to see after work, I fill my off-hours with walks, books, and movies. I've read more, and spent more time outside, than ever before.

When I reflect on my mornings sweating profusely as I sprinted through the train station, or my trips hauling 15 pounds of clothes to the nearest laundromat, I'm in awe of the physical effort I exerted each day — all the while neglecting to take a deep breath and relax.

I still believe that there's no place that will ever replace or rival New York City, and I'm certainly not claiming that Akron is the next hub of the United States (sorry). But I do think that the pandemic has forced many young people to reckon with their long-term priorities earlier than expected.

After experiencing life with a washing machine, a back porch, and a room where there's space to stand on both sides of my bed — an aspirational symbol of "making it" in New York, or so I frequently told myself — it makes the less appealing aspects of the city a slightly tougher sell.

My relationship with my parents has benefited

Without a doubt, the best part of moving home has been spending time with my mom and dad.

Like many hormonal high schoolers, I often locked myself in my room, focusing on homework or scrolling through my phone during my final few years living at home. I was too preoccupied with my grades and social life to realize that I soon wouldn't be living in the same state as two of the most important people in my life.

Having recently maintained my relationship with my parents primarily via phone calls or 48-to-72-hour visits, I know not to take this period for granted. And for the first time, I'm getting to know them as imperfect, eccentric individuals.

Our conversations are more open now, allowing them to speak about the complexities of their lives and, in turn, allowing me to better understand them as people. I've learned about their childhoods, careers, favorite memories, and even the lows that they shielded my brothers and me from as kids.

And it goes both ways.

Instead of reporting bullet-point summaries about my day over the phone between errands, I sit down and have in-depth conversations with them — sometimes about how we're feeling, other times about small things, like our favorite "Seinfeld" episodes or the trips on our bucket lists.

We've even learned when to back off and respect each other's space, growing comfortable in silence when necessary.

I won't live in Akron forever, and the pandemic could very well be the last time I'm here indefinitely — both my parents and I are fully aware of that

Years from now, on the other side of a COVID-19 vaccine, I'll look back on our nightly cul-de-sac walks and Saturday night family dinners, grateful for my do-over.

To be clear, moving back home has its downsides — sleepy cities, a lack of friends in the area, and reversion to old family habits don't seem like the ideal formula for many young people, particularly after they've established their independence. But in the midst of a pandemic, the slow pace and familiarity of home are comforting. And I know how lucky I am to have both.

Much like the exciting, challenging lessons that being on my own in New York City taught me, I'm coming to terms with the fact that Akron, and my parents, have plenty left to teach me too.