Eurovision Song Contest organisers say the lead singer of Italian glam rock band Maneskin has tested negative for drug use, putting an end to speculation that had tarnished the band’s victory.

“We consider the matter closed,” the European Broadcasting Union, which produces the annual kitsch-filled song festival, said in a statement on Monday. 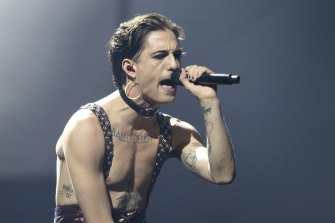 EBU said it came to the conclusion after it reviewed all the available footage of the TV broadcast on Saturday night and saw the negative results of Maneskin singer Damiano David’s voluntarily drug test.

Rumours had swirled on social media — and were raised at a Eurovision news conference — that David had snorted cocaine when he was seen leaning awkwardly over a table during the live TV broadcast. David immediately rejected the claim, saying he never uses drugs and that he was leaning over because his guitarist had broken a glass.

The claims found a particular echo in mainstream French media. France, which was a leading contender for the Eurovision victory, came in second place after the popular votes were tallied.

“We are alarmed that inaccurate speculation leading to fake news has overshadowed the spirit and the outcome of the event and unfairly affected the band,” the EBU statement said. 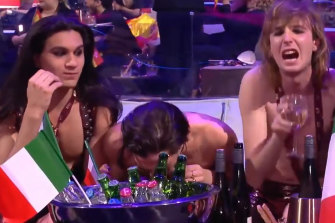 Maneskin singer Damiano David was caught on video appearing to sniff something off the table. He later said he was looking at a broken glass on the floor.

Maneskin’s win gave Italy a sorely needed boost after a dreadful year as one of the countries worst hit by the coronavirus and will bring next year’s competition back to the place where European song contests began.

Earlier at Rome’s Leonardo da Vinci airport as the band arrived home after their victory in Rotterdam, Netherlands, Maneskin lead singer Damiano David told reporters: “We want to shut down the rumours.”

Eurovision confirmed that broken glass was found under the table in question, but announced David had offered to take the test.

In Italy, the drug claim didn’t mar the praise that poured in on Sunday from the Italian establishment for the victory of the rather anti-establishment Maneskin, a glam rock band that got its start busking on Rome’s main shopping drag. 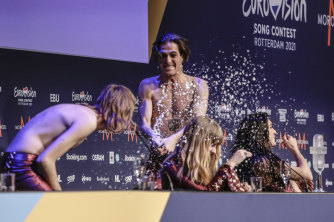 The band was the bookmakers’ favourite going into the Eurovision finale and sealed the win early on Sunday with the highest popular vote in the enormously entertaining, and incredibly kitsch, annual song festival.

“We are out of our minds!” Florence’s Uffizi Galleries tweeted, echoing Maneskin’s winning song lyrics, along with an image of a Caravaggio Medusa and the hashtag #Uffizirock.

Maneskin, Danish for “moonlight” and a tribute to bass player Victoria De Angelis’ Danish ancestry, won with a total of 529 points. France was second while Switzerland, which led after national juries had voted, finished third.

“It is amazing. It is amazing,” band members said as they got off the plane and were met by a gaggle of reporters outside baggage claim.

De Angelis said the band was shocked at the claims of drug use, echoing particularly loudly in runner-up France, where mainstream media prominently reported the suspicions and the country’s foreign minister, Jean-Yves Le Drian, was even asked about them on a news show on Sunday.

Le Drian stayed clear on the controversy, saying: “If there is a need to do tests, they’ll do tests.”

De Angelis said the band wants to put the controversy behind them because drug use goes against their ethos and message.

“We are totally against cocaine and the use of drugs and we would have never done it of course, so we are shocked that many people believe this,” she said.

The band got its start performing on Via del Corso, the main commercial thoroughfare in downtown Rome. Their scrappy performances in front of a Geox shoe store were a far cry from the over-the-top, flame-throwing extravaganza on Saturday night that literally split David’s pants.

David told a news conference this week that starting out on the street was embarrassing, since the group had to contend with other musicians vying for the same prized piece of footpath while neighbours complained about the noise.

“They were always calling the police,” De Angelis said, laughing.

Maneskin’s win was only Italy’s third victory in the contest and the first since Toto Cutugno took the honour in 1990. The victory means Italy will host next year’s competition, with cities bidding for the honour.

Launched in 1956 to foster unity after World War II, Eurovision evolved over the years from a bland ballad-fest to a campy, feel-good extravaganza. It has grown from seven countries to include more than 40, including non-European nations such as Israel and far-away Australia.

Legend has it that Eurovision got its inspiration from Italy’s Sanremo Music Festival, which began in 1951 as a post-war effort to boost Italian culture and the economy of the Ligurian coastal city that has housed it ever since.

Perhaps best known for having launched the likes of Andrea Boccelli and one of Italy’s most famous songs Nel blu, dipinto di blu — popularly known as Volare — the Sanremo festival usually picks Italy’s official selection for the Eurovision contest.

Maneskin won Sanremo this year with the same song, Zitti e Buoni (Quiet and good) that it performed on Saturday night in Rotterdam.

De Angelis said she hoped that their victory would send a message to future Italian contestants that ballads aren’t the only genre that can win contests.

“We think maybe from now on more bands will have the chance to play what they want and not be influenced by the radios or what the main genre is in Italy,” she said. “They can feel themselves and play rock music too.”