‘It’s good to come back’: Fiona O’Loughlin on comedy, ADHD and asexuality

Fiona O’Loughlin feels like a new woman. And it’s not because she’s a blonde. Nor has it got anything to do with her “new top lip”.

The 57-year-old comedian, who has fought a very public battle with alcoholism, was recently diagnosed with attention-deficit hyperactivity disorder, or ADHD. She is now on medication and feels like there has been a “seismic shift”. Oh, and she’s coming out as asexual. 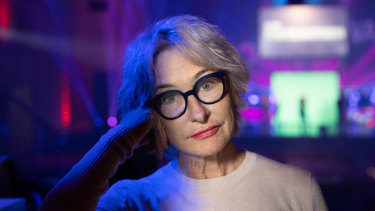 “For the last nine years, I have been self-soothing,” O’Loughlin says. “I kid you not, I’ve played [mobile] games for 13 hours in a row. Candy Crush and that sort of stuff.

“It had been getting worse for years and years and I tried hypnotherapy and I just thought, ‘What am I going to do?’ I’ve only got 20 years left, or thereabouts. I was horrified that if this keeps going I’m going to waste my time. But I could not stop.”

The comedian says doctors had previously suggested she might be experiencing ADHD symptoms, but she dismissed them. About three months ago, she went into a clinic to have her brain checked and was “diagnosed by accident”.

“I get my brain checked every few years because of a lot of blackout drinking. There’s a lot of … frontal lobe damage. But thankfully nothing that affects the comedy!”

O’Loughlin’s medication has meant she is now able to focus for hours at a time. When she sat down to compose her material for this year’s Melbourne International Comedy Festival, she ended up with five hours of material. That’s why she has two shows this year.

The first, The Unreliable Witness, is playing at Melbourne Town Hall and will detail how “this world, comedy, saved me and nearly killed me”. Her other act, No Lies, will be held at Melbourne’s Imperial Hotel. During the latter, O’Loughlin will recount some of her life’s most embarrassing and ridiculous stories. And don’t worry, she’s promising lots of original material. Quite the feat for someone who has won I’m a Celebrity … Get Me Out of Here! and been featured on the ABC’s Australian Story.

“This is the first time I’ve ever walked onto stage and know what’s going to come out of my mouth,” O’Loughlin says. “I’ve never written a show. I always catch scraps of paper and, literally, once I had a crumbled piece of paper in my handbag. It was about eight words and that was my show for the year.”

O’Loughlin’s realisation that she was asexual will feature in the Imperial Hotel performance. (Asexuality refers to someone who has little to no desire for sexual activity.) One story may or may not involve hiring a male sex worker to sit and watch South Park with.

“I go into that in hilarious detail,” O’Loughlin says. “I’m homophobic. And I’m heterophobic more! I think you’re all disgusting. You’re sticking things in your hairy holes. It’s revolting. Can’t you just buy things? Buy a plant or something.”

So is any topic off limits?

“When you’ve passed out drunk on stage and when you’ve drunk hand sanitiser, absolutely not,” O’Loughlin says. “I’m just happy people remember me. I’m surprised they have the appetite. It’s good to come back from financial ruin.”

The Age is a media partner of the Melbourne International Comedy Festival.