JAN MOIR: Novak Djokovic should set an example during the Covid crisis

JAN MOIR: Novak Djokovic should set an example during the Covid crisis – not behave like a swaggering, spoilt baby

As in, there are rules, but they don’t apply to him. There are masks, but he doesn’t have to wear one.

There are vaccinations available to protect us from disease, from suffering and from each other, but he doesn’t have to get them.

Confusion surrounds the vaccination status of the world’s No1, but only because Djokovic, whose anti-vax sentiments are no secret — has always refused to clarify it.

Meanwhile, he will not reveal why Australian authorities initially granted him a medical exemption from their Covid vaccination rules, only for it to be withdrawn rather dramatically on Wednesday. 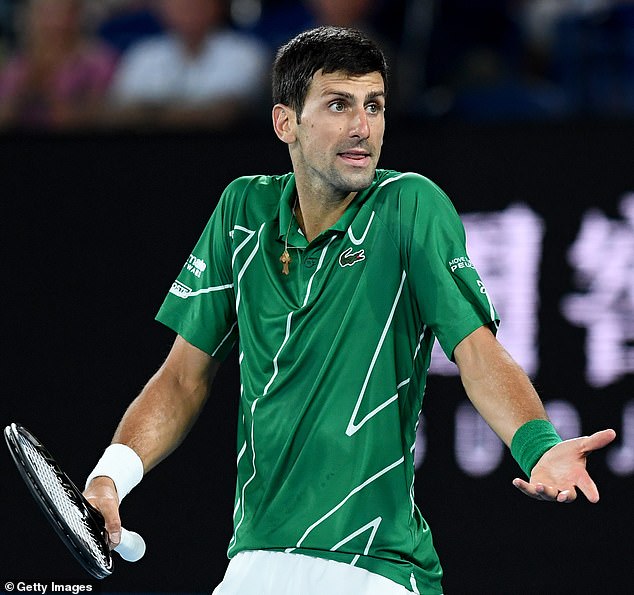 ‘Confusion surrounds the vaccination status of the world’s No1, but only because Djokovic, whose anti-vax sentiments are no secret — has always refused to clarify it’

Now he could be on his way home, perhaps not playing in the Australian Open any time soon — not to mention any other grand slam tournament.

New balls, please. Some might say that as an elite athlete who travels the globe to entertain with his supreme talent, Djokovic should be exempt from Covid restrictions, but I would argue the opposite.

As a hero to millions, he should be setting an example, not behaving like a spoilt baby wrapped up in the kryptonite of sporting privilege.

He obviously benefits from, and has come to expect, the generous dispensations afforded to top players. But even for him there is a limit.

In Melbourne, he has met his match. One can imagine Australians, who have endured some of the strictest lockdowns of the global pandemic, struggling to tolerate his insouciance and iconoclastic belief he is above it all.

Earlier this week he swaggered into town, boasting on Twitter how he had bested the Covid rules and the system.

How damaging that must have been for Australian morale, in a country where a great many families have had to sacrifice Christmases and birthdays usually spent with relatives elsewhere in the country or overseas. 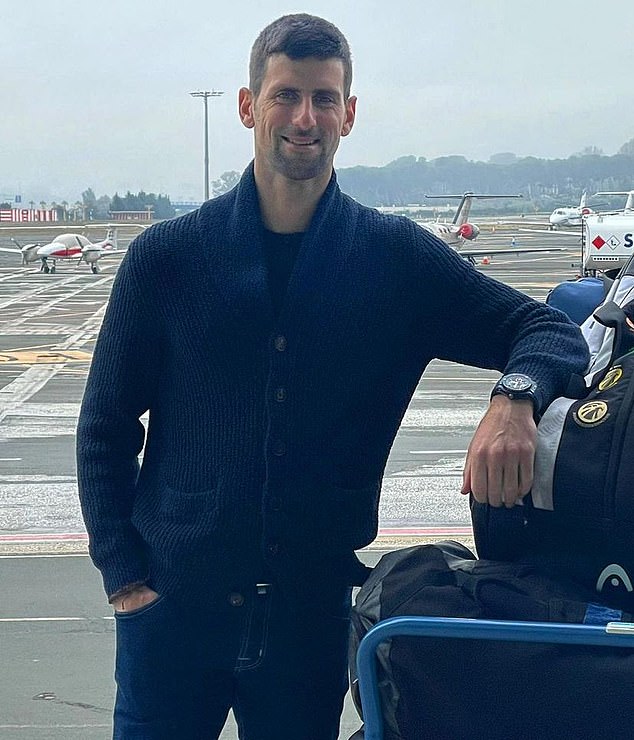 Djokovic will not reveal why Australian authorities initially granted him a medical exemption from their Covid vaccination rules, only for it to be withdrawn on Wednesday

Had Novak Djokovic walked onto the hard courts of Melbourne Park as planned, he might even have been booed. Why? People have had enough. Our patience is wearing thinner that the gut strings on his graphene racket.

We meet people like Novak all the time; the no-maskers, the anti-lockdown loons, the mad protesters who believe vaccines are a global Smersh plot to inject them with mind control nanobots, the Piers Corbyn mob, not to mention our own cheese and wine shagtastic sex maniacs in government.

Fair enough (not really) if he does not want to be vaccinated, that is his choice. But he cannot continue to stake his place in the international world of tennis. He cannot carry on travelling from country to country with impunity, like some untouchable emperor of sport.

You cannot be anti-vax and pro pro-tennis, you cannot have your unvaccinated strawberries with your free range cream. It is either or, but not both.

I don’t need to remind anyone it has been nearly two years since the first lockdowns turned the world into a strange place with new rules and fresh tensions on every homefront.

A place where we have had to negotiate an uncertain future with a strange new foe. Djokovic’s attitude — hardly unique — makes fools of us all and begs the question once more; are we really all in it together?

Or is it every tennis player for himself. He has a lot of alternative views, so many that one can see how he might feel that pedestrian, mainstream life-saving medicine is somehow beneath him. 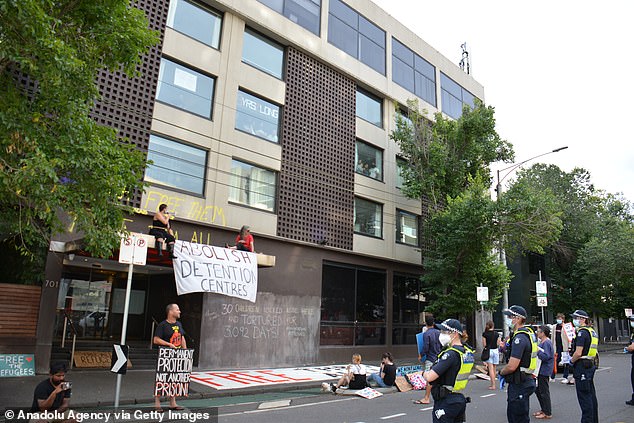 Among his personal cornucopia of codswallop are the beliefs that you can energise water by talking to it and that we are all descended from some ancient Serbian super race — and who knows, maybe we are.

But from my position on the baseline of Covid equality, I’d like to lift the racket of justice, toss the ball of Be Fair into the germy air and smash an ace of disgrace over Novak’s smug net of self-regard.

If he was a statue I’d be tempted to spray him with red paint, knock him off his perch and throw him in the harbour — what jury would convict me? Thank goodness he’s being shown the door in Australia.

A bit of common sense at last. Djokovic is free to believe what he wants, but when it comes to matters of public health, he must also accept those views have consequences.

I haven’t a Lottie sympathy

Pass me that onion. I want to support tearful Lottie Moss, who is bawling and crying — and filmed herself doing so — over the fact that saucy photographs from her Only Fans account have been leaked online.

The younger half-sister of Kate Moss says she makes around £70,000 a month from the social media platform, on which users pay to view adult content photos and videos. 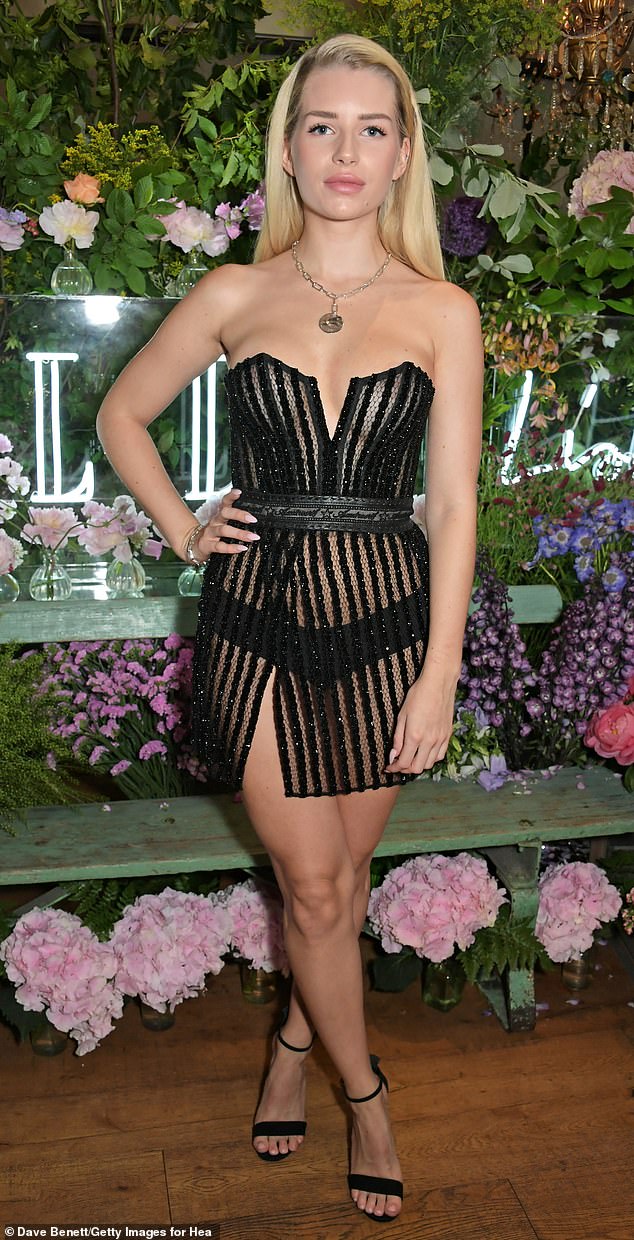 She’s got a Lottie cheek, hasn’t she? I suppose feminists like me should regard this lucrative revenue stream as a marvellous symbol of female entrepreneurship, not to mention an artistic display of she-empowerment.

But to be honest, I struggle to see it as anything more than a slice of peep show designed to keep the dirty mac brigade happy.

And Lottie isn’t the only one to take advantage of the service.

Page Three models and others top-up their earnings there, successfully sexually objectifying themselves rather than letting a middleman have the privilege.

There is always that. Lottie says an ‘evil’ friend betrayed her by leaking her phone number and details.

This is distressing — but surely those who make money from the site must know it’s a distinct possibility that the photographs will get out somehow?

It also makes one suspect that Lottie is in tears because men are slobbering over her pictures for free, instead of paying her fee.

And perhaps that is not quite the positive message or sympathy vote she fondly imagines it to be.

Brace yourselves, preferably with braces. For are we really ready for a revival of the 1990s ‘exposed thong’ trend? 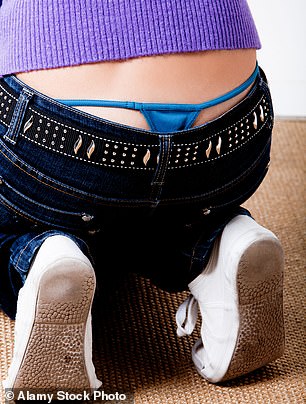 Cast your mind back to the terrible time when it was briefly (God, I am hilarious) fashionable for women to show off thong underwear over the waistband of their low-rise jeans.

Why? Who knows. It wasn’t attractive then or now, but here it is, all over again.

Only this time designers have stitched the trousers and exposed thongs together in a single garment.

‘This season many designers are creating garments with the exposed G-string or thong sewn in, which moves the trend away from the grunge and hip hop vibes and makes the whole look feel more couture and glamorous,’ explained one expert.

Does it? Sometimes I feel very old.

Putting vandals on a pedestal is wrong

Two dopey dudes who took part in the U.S. Capitol Hill riots last year and boasted about breaking in and smoking a joint in the building were each sentenced to 30 days in jail.

‘This wasn’t Bill And Ted’s Excellent Adventure,’ said Judge Tanya Chutkan, before handing down the sentences this week. Good for her. 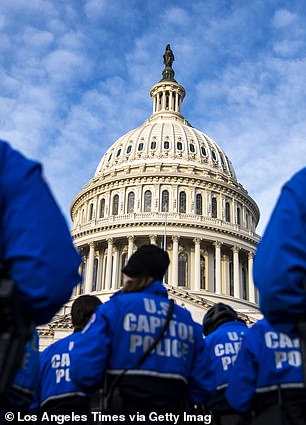 And how I wish we had some of that penalising spirit here. Instead, the jury in the Colston statue trial seemed to believe the protesters involved were a romantic cross between Robin Hood’s Merrie Men and Five Go Mad In Bristol.

And that is not right. If beered-up rugger b***ers toppled the statue of Emmeline Pankhurst in Manchester and threw it in the Ship Canal, would they escape censure or sentence? I doubt it.

Neither would there be much leniency for any gammon freedom fighters trying to deface the bust of Keir Hardie in Cumnock.

Although we don’t have to worry about Tony Blair. As the row blazes on about his knighthood, no one will be putting up a statue of him any time soon.

Un petit batsqueak of support for President Macron, who says he wants to irritate the unvaccinated into submission.

My sentiments exactly. Make life difficult for them. After all, they are holding everyone else to ransom.

Meanwhile, Italians are handing out medals to those who finally agree to be vaccinated, while here in the UK, where up to 90 per cent of Covid hospital admissions are said to be unvaccinated, teams of vaccinators are now visiting workplaces and shopping centres to give jabs.

I’ll get out there and do it myself, if that’s what it takes for us all to be free.

Respect? what a thin blue line!

Evening all. It’s time to pop on my Superintendent Moir hat, fill my trusty law-and-order pipe with the pungent tobacco of wisdom and consider the role of Avon and Somerset Police in the Colston statue debacle.

No, I wasn’t impressed when they stood around and watched when the statue was toppled in the summer of 2020.

And now the perpetrators have been found not guilty of causing criminal damage, Avon’s finest have issued a weedy statement saying they ‘respect’ the decision of the courts. Respect! How pathetic.

Even on their own website, the Avon constabulary define criminal damage as ‘someone without lawful excuse destroying or damaging any property belonging to another or intending to do so’.

If spray-painting an object of public art and throwing it into a harbour isn’t causing destruction, then what is?