John Lewis’ death sparks surge in support to rename Edmund Pettus Bridge, the site of Bloody Sunday, in his honor

Following the death of Representative John Lewis on Friday, millions have paid tribute to the Georgia Congressman’s decades of activism, fighting for social justice and voting rights. Many pointed to Lewis’ iconic leadership in the 1965 march that came to be known as Bloody Sunday, leading to a surge of support to rename the Edmund Pettus Bridge, where the peaceful marchers were attacked by police, in Lewis’ honor.

Edmund Pettus was a brigadier general in the Confederate Army during the Civil War. He later joined the Alabama Ku Klux Klan and ascended to the level of Grand Dragon, according to the Smithsonian. Pettus also served in the U.S. Senate from 1897 until his death on July 27, 1907.

“It’s far past time to rename the Edmund Pettus Bridge after Representative John Lewis, a civil rights icon that nearly gave his life on that bridge,” Michael Starr Hopkins, who created the petition, wrote. “Edmund Pettus was a bitter racist, undeserving of the honor bestowed upon him. As we wipe away this country’s long stain of bigotry, we must also wipe away the names of men like Edmund Pettus.”

On March 7, 1965, Lewis led 600 people across the Edmund Pettus Bridge in Selma, Alabama, in a peaceful demonstration demanding the right to vote for Black people. At the foot of the bridge, the protesters were attacked by state troopers, who launched tear gas into the crowd and beat marchers with night sticks. Lewis, who was 25 at the time, suffered a fractured skull after he was beaten by a police officer. 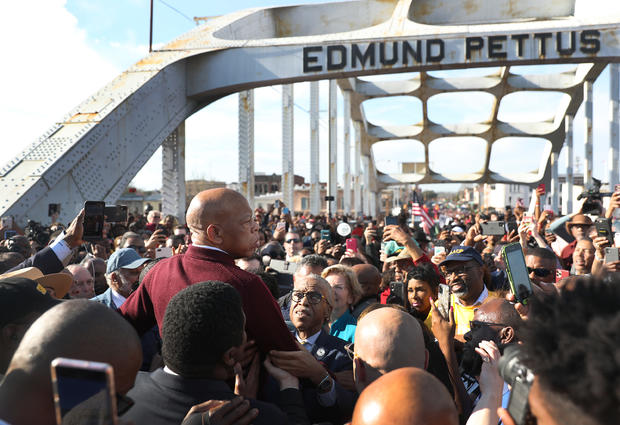 The violence by police was widely publicized, and months later, President Lyndon B. Johnson signed the voting rights act of 1965.

Lewis reflected on the 55th anniversary of the march this year, saying in a tweet, “we were beaten, tear gassed, and trampled by horses. I thought I saw death. I thought I was going to die.”

55 years ago today, we were beaten, tear gassed, and trampled by horses. I thought I saw death. I thought I was going to die. I don’t know how I made it back, but I know we cannot rest. We cannot become weary. We must keep pushing and pulling and find a way to get in the way. pic.twitter.com/gg6n1CyJls

Paul McCartney tweeted support for renaming the bridge in Lewis’ honor, saying the Georgia congressman was “a great leader who fought with honesty and bravery for civil rights in America.”

Sad to hear the news that civil rights legend John Lewis died yesterday. He was such a great leader who fought with honesty and bravery for civil rights in America. Long may his memory remain in our hearts. How about renaming the famous Pettus Bridge… pic.twitter.com/1iDVa1T2LI

Musician Stevie Van Zandt echoed McCartney’s statement, saying, “It should have happened while he was alive. Why we would have anything named after the grand dragon of the ku klux klan is way beyond me.”

Hopefully the Edmund Pettus Bridge will be renamed the John Lewis Bridge. It should have happened while he was alive. Why we would have anything named after the grand dragon of the ku klux klan is way beyond me.

Ava DuVernay, who directed the 2014 film “Selma” about the 1965 voting rights marches, tweeted out her support of the petition last month.

She said the bridge should be “named for a hero” and “not for a murderer,” and said that the change is “past due.”

Alabama Senator Doug Jones and Representative Terri Sewell have expressed their support for the name change as well. Alabama Governor Kay Ivey, who the petition is aimed at, has not commented on the petition.