Keith Urban took aim at the “shine blockers” of the world as Channel 7 fired the first shots in the battle of the reality TV juggernauts on Monday night.

The network started The Voice at 7pm, half an hour before MasterChef on Ten and Lego Masters on Nine kicked off their seasons. It delivered a strong debut that was big on laughs, drama and, yes, vocal talent, even if it cycled through just seven blind auditions in almost two hours of television. 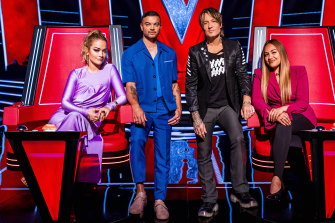 Responding to the opening performance by 19-year-old Ally Eley, from the western suburbs of Melbourne, the judges asked why she had chosen to cover the song Teenage Dirtbag, a hit for New York alt-rockers Wheatus in 2000. She explained by telling a story about a teacher whom she had looked up to at primary school, but who responded to her first-ever performance, in front of the class when she was just nine years old, by laughing and saying: “I thought you said you could sing”.

“In life it’s not what happens to us, it’s how we deal with it,” he added. “Do you know what your music teacher was? She was intimidated and terrified of your talent, and she was very jealous.”

Despite the words of encouragement, she opted to go with Guy Sebastian. 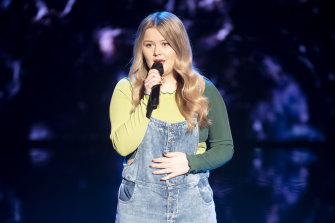 Ally Eley, a 19-year-old from Melbourne, was the season’s first performer. Credit:Seven

Before his performance, Phegan, a 45-year-old father of six from Walla Walla in outback New South Wales, played down his prospects.

“I’ve got more chance of stealing the Queen’s handbag than turning a chair at this thing,” he said.

In fact, he turned three with his version of This Town, a song by former One Direction member Niall Horan.

“You’ve made me day, like fair dinkum,” he told the judges. Referring to his wife, he said: “I said to Kaz, ‘I’ll throw me hat in the ring, we’ll give this a crack, y’know’.”

Ora was baffled. “I can’t understand a word,” she said. “But luckily music has no language, so we can connect that way. Fair dickum [sic], I love you.”

The only performer not to earn a chair turn was burlesque artist Lou P Scarlett, who emerged in a multilayered outfit that was supposed to suggest the emotional states of a cupcake … or something.

“Obviously,” Urban observed sagely, “burlesque is not made for the backs of chairs.”

It was a strong return for The Voice, a show that had seemed to be running hoarse when Nine (owner of this masthead) was outbid by Seven for the rights to the format in August 2020. 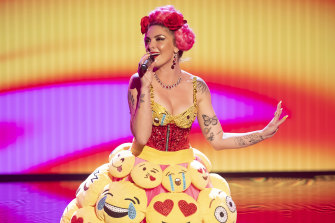 Not made for the backs of chairs: Burlesque performer Lou P Scarlett.Credit:Seven

A spokesperson for Nine said at the time that “due to the age of the show and declining demographic profile” it had become “by far the poorest financial performer on our slate”. The show, which was rumoured to be costing Nine $40 million a season, averaged 938,000 viewers per episode in its ninth and final season on the network, a far cry from the 2,375,000 viewers it averaged on debut in 2012.

But with a reduced season of 13 episodes (down from 21 the year before), tweaked format and refreshed judging panel, Seven enjoyed success last year as the show drew an average 1,285,000 per episode.