Labor leader Anthony Albanese will hold a campaign rally in Sydney this Sunday to prepare for an election next year after telling MPs there was a 50 per cent chance the government would call a snap poll before its stated plan for a federal budget on March 29.

Mr Albanese told Labor MPs to attend a meeting in Canberra this Friday to discuss the election plan, setting up the last caucus meeting of the year amid policy debates on religious freedom, the economy and climate change. 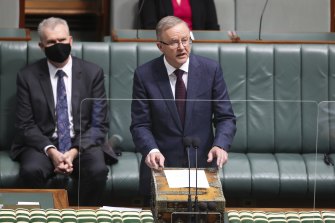 Anthony Albanese told Labor MPs: “The government is fracturing to the right and to the left. This is a government that has run its course.”Credit:Alex Ellinghausen

The Opposition Leader reminded caucus members on Tuesday that he had often said he would “kick with the wind in the fourth quarter” of the election cycle, adding that they were now in the final quarter and doing what he had planned.

“The government is fracturing to the right and to the left. This is a government that has run its course,” he told the gathering, according to a caucus spokesman.

One day after the government released its draft calendar for Parliament next year, Mr Albanese told colleagues the plan allowed only 10 days of sittings in the lower house before August next year.

He pointed to one feature of the calendar – the absence of any Parliament in the week after Australia Day – to tell MPs to be ready for a March election.

“He said this Sunday we would hold our first campaign rally. He advised members that we will have a further caucus meeting on Friday this week where he will talk about the campaign,” the caucus spokesman said.

Mr Albanese said Labor was competitive in the election contest and this was a “testament to the discipline of the team” in the light of the fortunes for other oppositions during the pandemic.

“The government does not deserve a second decade in politics,” he told the meeting. “If elected, we will be the most experienced incoming Labor government in history.”

He said it was “50:50” whether the Labor caucus would meet again in Parliament before the election, given the prospect of a March poll.