Labor leader Anthony Albanese has promised a spending blitz on projects such as sporting clubs, pools and roads in a campaign that appears to favour marginal seats just two years after the national audit office slammed the Coalition for doing the same.

The campaign has promised about $750 million in dozens of electorates when Mr Albanese needs to win just eight seats to form government and is racing to unveil his plans in community visits before Prime Minister Scott Morrison announces new measures in the March 29 budget. 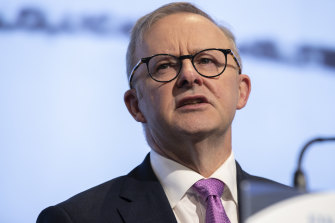 Labor leader Anthony Albanese stepped up the spending on Monday with a $22 million pledge to a manufacturing hub in Townsville in the federal seat of Herbert.Credit:Louie Douvis

But the government has accused Mr Albanese of hypocrisy for pouring money into Labor and marginal electorates with projects such as a sports field in southern Melbourne, a basketball court in Ipswich, Queensland and a footpath and cycling path in the Blue Mountains of NSW.

“Labor’s spending is only exceeded by its hypocrisy,” Finance Minister Simon Birmingham said.

“After all of Anthony Albanese’s outrage over Coalition support for community infrastructure, he’s now demonstrating that his words were meaningless and his outrage nothing but cheap politics.”

Labor transport spokeswoman Catherine King defended the promises by saying she would put all the spending proposals to the Department of Infrastructure to review the merits of every project if Labor formed government.

“Between now and the election, Labor will make a range of commitments in seats across the country, no matter which way locals typically vote,” she said.

Labor candidates are making the promises, with Ms King and other frontbenchers using Facebook and YouTube to spread the word about local projects even when there is no formal press release with more detail.

A key Labor claim is that the money is needed in their seats because they missed out on grants in the so-called “sports rorts” program that became a political scandal when Coalition advisers used a colour-coded spreadsheet to determine which electorates received grants.

The promises leave Labor exposed, however, to a similar audit if it wins the election, due by late May.

Mr Albanese stepped up the spending on Monday with a $22 million pledge to a manufacturing hub in Townsville in the federal seat of Herbert, signalling his hope for a big swing at the election by campaigning in a seat the government holds by a margin of 8.4 per cent.

“Unlike what the government does, which is to get out its colour-coded spreadsheet, look at what the marginality of seats is and make decisions based upon that colour code, this is based upon the evidence,” Mr Albanese said of his new spending promise.

Yet the Labor spending strongly favours electorates the party already holds or can win with relatively small swings at the election, according to a check by The Sydney Morning Herald and The Age of the commitments being made in statements, Facebook posts and YouTube videos.

Last weekend, for instance, Labor promised $1.5 million for the Pine Rivers Netball Association in the northern Brisbane seat of Dickson, held by Defence Minister Peter Dutton by 4.6 per cent, and $2 million for the Ipswich Basketball Stadium in the seat of Blair, held by Labor frontbencher Shayne Neumann by 1.2 per cent.

It also announced $2.5 million on Saturday for an upgrade to football fields at Henson Park in Marrickville in western Sydney, part of Mr Albanese’s electorate of Grayndler.

Projects announced last week included $1.6 million for the Waite Street community reserve in the electorate of Boothby in South Australia, $500,000 for a recreation ground in Braddon in Tasmania, $3.25 million for the Leopold Memorial Reserve in Corangamite in Victoria and $8.5 million to upgrade the intersection of Hill Road and Bennelong Road in Reid in the western suburbs of Sydney.

Those electorates are all considered marginal under Australian Electoral Commission guidance that says a seat is marginal when the winning party receives less than 56 per cent of the vote in two-party terms.

The Labor spending has increased dramatically in recent weeks, with 30 projects unveiled since the beginning of March in addition to 45 earlier projects, including $20 million in October for the Bellarine Aquatic Centre in Geelong, also in Corangamite.

The government estimates Labor has promised about $750 million since September on about 75 projects but Labor has not released an estimate for its overall spending.

The Herald and The Age asked Labor to name the program that would fund the promises, disclose the total sum promised so far and explain whether it was trying to gain votes with pledges that favoured marginal and Labor seats.

“There’s nothing unusual about political parties making commitments in the lead-up to an election,” Ms King said in response.

“All of our infrastructure commitments, whether they be road upgrades in Adelaide or remote sporting facilities in the NT, are about delivering a better life to communities across Australia.

“Many of these commitments are in communities that have repeatedly missed out on the funding they deserve under the current government.”

One of the promises, a $4 million pledge on March 4 toward a new hydrotherapy pool at the Orange Aboriginal Medical Service in the central west of NSW, is in the safe Nationals electorate of Calare.

Several of the projects in marginal seats are designed to help First Australians, such as $22 million for a Birthing on Country Centre of Excellence in Gilmore and $10.5 million for sporting facilities in Lingiari in the Northern Territory. The promises also include $13.3 million for Yadu Health for the Indigenous community in the safe Liberal seat of Grey in South Australia.