A clash in the Senate is threatening to halt a federal Labor plan to pass new workplace laws by Christmas after the Greens aired their concerns about changes that are meant to lift wages when inflation is eroding household incomes.

The government is running out of time to enact its agenda after setting aside just four days of parliament to debate the controversial workplace laws as well as its election pledge to set up a corruption watchdog. 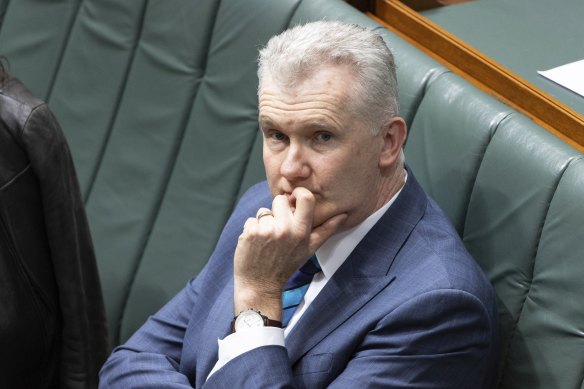 The crossbench concerns may force the government to agree to amendments on both major bills and keep parliament sitting in Canberra beyond December 1, meant to be the last day to pass legislation this year.

While Workplace Minister Tony Burke has promised “good faith conversations” with the crossbench to amend the bill, he is holding out against extending the talks into next year and may have to guillotine debate in the Senate to force a vote this year.

The government agenda for the Senate does not set aside any time for the workplace or anti-corruption bills this week, leaving four days in the subsequent week to decide two of the government’s most important and complex reforms.

A key concern for the Greens is a section of the workplace bill that amends the longstanding Better Off Overall Test (known as the BOOT) in workplace law in a bid to make it simpler so wage deals are not halted by technicalities at the Fair Work Commission.

Greens leader Adam Bandt is backing the Labor plan to disband the Australian Building and Construction Commission, a change that unions support and employer groups oppose.

But the Greens are pressing for changes and assurances that can demonstrate the final bill will be able to lift wages – the key pledge from Labor at the election.

“The Greens have been pushing for years to give people stronger rights to flexible working arrangements and to abolish the Australian Building and Construction Commission, so we back the key elements of the bill,” Bandt told this masthead on Friday.

“But we’re worried some parts of the bill as drafted could see people go backwards. I don’t think that’s the government’s intention, so we’ve been having good faith discussions with the government for some weeks about how to close those loopholes.”

Employers have welcomed Burke’s willingness to amend the BOOT and ACTU secretary Sally McManus has accepted the idea of simplifying the test, but some unions are urging the government to keep the current measures in place because the changes would weaken protections for workers.

The new union in the retail industry, the Retail and Fast Food Workers Union (RAFFWU), blasted the government over the issue and said the idea the BOOT was not working properly was a “fallacy” spread by big employers who wanted to cut wages.

“The only reason to attack the BOOT is to pay workers less,” RAFFWU secretary Josh Cullinan wrote in a submission to the parliamentary inquiry into the draft law.

RAFFWU is seeking to persuade the Greens to block the changes, setting up a clash with Labor and the longstanding union in the retail sector, the Shop, Distributive and Allied Employees’ Association (SDA). Burke was an organiser for the SDA before entering NSW and, later, federal parliament.

Cullinan has been a fierce critic of the SDA and has blamed it for striking wage deals that leave workers worse off, a claim the SDA has denied.

“We have been asking Jacqui Lambie, David Pocock and the Greens to object to any changes to the BOOT,” Cullinan said on Friday.

The next step in the argument over the bill will be the release of a parliamentary committee report into the draft law on Tuesday, airing views from Labor, the Coalition, the Greens and crossbenchers including ACT Senator David Pocock.

Pocock has repeated his calls on the government to split the bill so the most contentious elements could be given more consideration next year, but the government is looking at adding several days to the sitting calendar – such as the next two Fridays – to allow more time.

The manager of government business in the Senate, Katy Gallagher, made no comment in response to questions put to her office on Friday morning about the limited time left for the debate. Her spokesman said at 6.16pm on Friday it was “safe to say” the workplace bill would be introduced to the Senate in the coming week but was not listed for debate in that week.

The government cancelled sitting dates for parliament after the death of Queen Elizabeth in September and did not restore all the lost time to the agenda later, a decision that led Pocock to call at the time for more sitting days so more work could be done before the end of the year.