Home » Lifestyle » Lee Majors on Farrah Fawcett and working at 80

Lee Majors on Farrah Fawcett and working at 80

Meeting my childhood hero Lee Majors, I am gripped with a sudden urge to make a confession. In the Seventies, when he was the biggest star on global television, I worked on a market stall in Manchester selling unauthorised Six Million Dollar Man T-shirts. So when, 40 years later, I meet him, I feel obliged to tell him of my foray into contraband. ‘Oh so it was you,’ he smiles. ‘You’re the reason I’m not sitting on my own private island. You’re why I’m still working at my age.’ 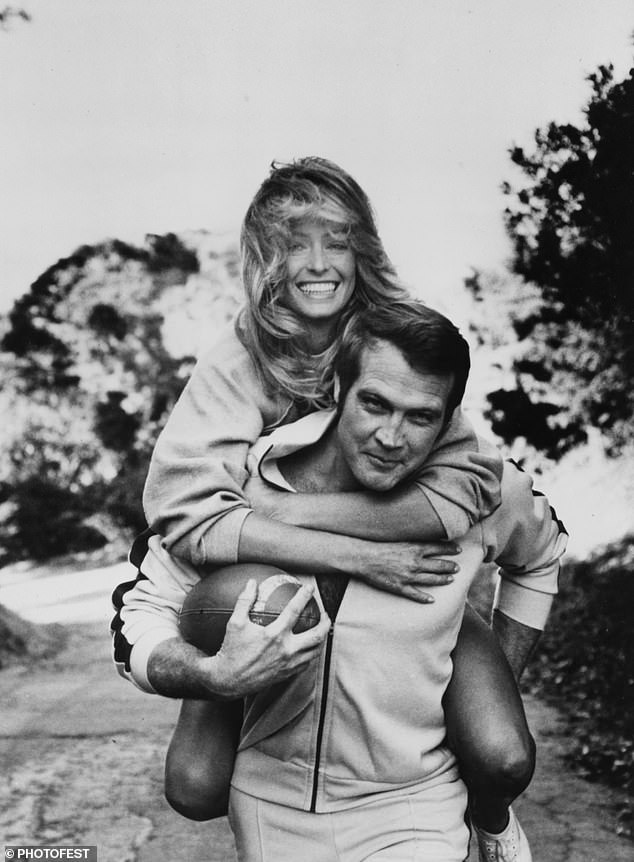 Lee Majors and Farrah Fawcett in 1976. With him in The Six Million Dollar Man and her in Charlie’s Angels, the Majors/Fawcett double-act surfed the apex of über-glam

It is hard to exaggerate what a figure Majors, now 80, cut in his Seventies heyday. As Colonel Steve Austin, the Six Million Dollar Man, he was every teenage boy’s fantasy hero, half-man, half-robot, rebuilt by computer, fighting to save the world from evil-doers. Now with two new knees, the legacy of a career spent insisting on performing his own stunts, as he sits in a London hotel during a rare visit to Britain, he looks trim and well preserved.

Ah, bionic: the very word his show introduced into the English language to describe technology-enhanced superhuman activity. And it will be back in our consciousness this autumn when a 21st-century update appears in a new blockbuster starring Mark Wahlberg as the rebuilt Austin. Though there has been some inflation in reconstructive surgery costs since the Seventies: Wahlberg is The Six Billion Dollar Man. 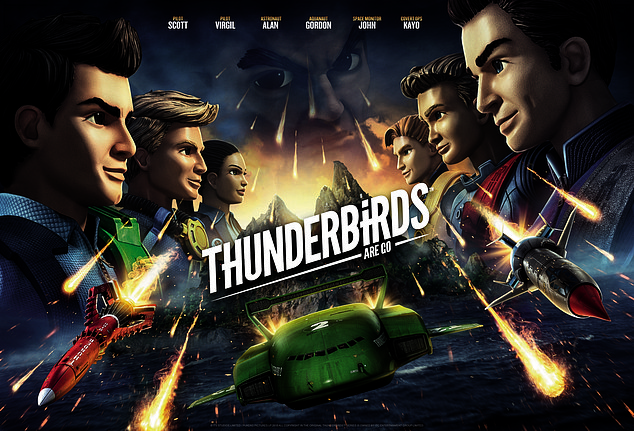 Lovers of fantasy action will be able to hear Majors this summer as he voices a role in the Thunderbirds, in ITV’s new animated version of the puppet adventure 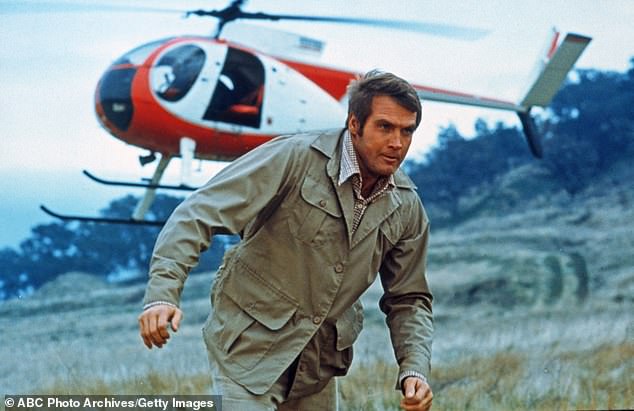 Sadly the original Austin has no part in the new movie, but lovers of fantasy action will be able to hear Majors this summer as he voices the role of Jeff Tracy, the patriarch of the Thunderbirds dynasty, in ITV’s new animated version of the puppet adventure. ‘I know it was a big thing in this country, but it kind of passed us by in the States,’ says Majors. ‘Then when I saw who else was in the cast – Rosamund Pike, David Tennant – I thought yeah, count me in. That’s why I’m still doing this job at 80: I just love working.’

It has been like that since he first stepped out on stage as John Proctor in a student production of The Crucible at Indiana University. He was an American football scholar and had invited the team along to the first night. They sat on the front row. When he saw a tear rolling down the cheek of one of their girlfriends he thought he was on to something. Then, when he landed his first part in a movie, he was so sure he was going places he persuaded the cinema in his home town of Middlesboro, Kentucky, to host a special screening. ‘I was playing Joan Crawford’s husband. I was in my early 20s, she was in her 50s, which suggested this wasn’t a relationship that was going to last. In my little town in Kentucky they put up a poster that read: Lee Majors in Strait-Jacket… with Joan Crawford. When it turned out that she chopped my head off before the credits, I didn’t dare show my face in town again.’

Though he did spend long enough with Crawford for her to offer him one invaluable piece of advice. ‘She told me, “If you can’t take rejection then you’re in the wrong business,”’ he recalls. ‘They knew what they were talking about, those old-school stars. When I played alongside Barbara Stanwyck in The Big Valley, she told me, “Be on time, know your lines, keep your mouth shut and you’ll go a long way.” For 55 years I’ve been doing that.’

Though in truth, Majors has done a little more than that. Through the Sixties, Seventies and Eighties he starred in three TV series – The Big Valley, The Six Million Dollar Man and The Fall Guy – and was barely off the screen. For three decades his workload was phenomenal. ‘Shooting 38 hour-long action shows in a year, that’s a lot of work,’ he suggests. ‘You’re working 12 hours a day, every day of the week. If I had any time off, I’d go to a cabin on the lake and sleep.’

Such was his contractual commitment, he turned down more movies than many of his contemporaries got to star in.

‘I guess the biggest one I was offered was the Jon Voight role in Midnight Cowboy,’ he says. ‘I was up for it, but then all of a sudden they announced another series of The Big Valley. So that was it. People ask if I regret it, but I think through sticking with television I probably reached more people all over the world.’ 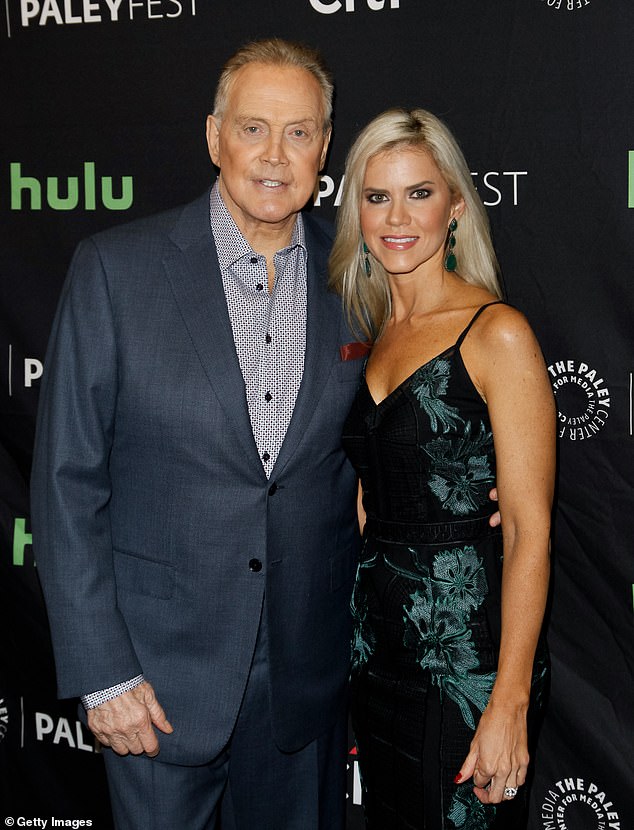 Eighty-year-old Lee Majors with his fourth wife, Faith, 44. The couple married in 2002

With such a busy schedule, he didn’t have time to socialise. Indeed, when one day in 1968 his publicist told him it might be an idea to be seen at the premiere of a new series of The Big Valley in the company of someone photogenic, he asked for a bit of help. He’d had no opportunity to meet anyone since his divorce from his college sweetheart, Kathy Robinson, four years earlier. The publicist turned to his file of clients. ‘He showed me a bunch of pictures and told me to pick the best-looking girl,’ Majors recalls. ‘So I did.’

The woman he chose to be his date was an aspirant actress from the University of Texas who was spending her summer holiday trying to earn a few dollars in commercials. Her name was Farrah Fawcett.

‘First moment we were together, that was basically it,’ he adds. ‘She never went back to Texas to finish her senior year.’

The pair became the most famous couple in the world. In the mid-Seventies, with him in The Six Million Dollar Man and her in Charlie’s Angels, the Majors/Fawcett double-act surfed the apex of über-glam, a gorgeous flurry of swirling blonde hair and perfect dentistry. Whenever they were seen together in public the air was filled with the flash of cameras.

‘People tell me we were the Brad and Angelina of our time,’ he says. ‘And sadly that didn’t work out too good either.’

Pursued wherever they went, the strains on their relationship quickly became intolerable. ‘We couldn’t move, the paps always found out where we were. I went out of my way to avoid them, but someone would always tip them off. We were married eight years, but the pressures told. Though maybe it was more to do with the fact we were never together.

‘One year I saw her no more than two weeks. I remember she was doing a movie in London over Christmas and I was shooting in Los Angeles, so I flew to England, spent Christmas Day with her, then flew back to start shooting again. It’s no way to keep a relationship together.’

They split in 1982, in some acrimony. Though they were later reconciled when Fawcett was diagnosed with cancer. Indeed, there was talk of them appearing in a television drama together, but it never came about: she died in 2009.

Majors has since found long-term stability with his fourth wife, Faith, to whom he was married in 2002. Amused at the discovery of elements of his past, she occasionally finds items on eBay of unauthorised Six Million Dollar Man merchandise like those sold at Altrincham market all those years ago.

‘You weren’t the only one making money out of me,’ he smiles. ‘And I’m still making money for people. Officially we had a doll and a lunchbox, that was about it. But I did a comic convention the other day and people were coming up to me with wheelbarrows of stuff they wanted me to sign so they could sell it on eBay: albums of music I never sang on, T-shirts, magazines, all unlicensed. The funny thing is, I was meant to have 12 per cent of the profit from merchandise on that series and I never got anything. If I come back in a second life, I’d love to come back as a Universal Studios accountant. Whenever I ask, they still claim they are in the red on the Six Million Dollar Man franchise.

Though Majors isn’t bitter. After all, he says, why on earth should he be bitter? Here he is at 80, still in gainful employment.

‘Ah listen,’ he says. ‘The hours are less, the shows are less. But it’s still fun. What else would I do? I used to be the hero. Now I play the hero’s father, next I’ll be playing his grandfather. But hey, I’m happy with that.’

‘Thunderbirds Are Go’ Season 3B is on Saturdays, ITV and CITV, at 8am