Liam’s so wrong not to have a hip op at 49: ‘Surgery was surely just for geriatrics’ writes CLARE GOLDWIN on having a hip replacement in your 40s

Every morning I wake up, luxuriate in a full-body stretch and give a small, silent prayer of thanks. I’m not usually one for gratitude diaries or mindfulness, but I do the same every time I sit crosslegged in a yoga session, or when I’m on a long countryside ramble with my husband and two children.

Why? Because until about 18 months ago, thanks to arthritis in my right hip, it had been years since I’d been able to lie flat in bed, complete an exercise class or walk for more than ten minutes without wondering when I could sit down. A jog was definitely out of the question.

I might have had the activity levels of someone in their late 70s, as a surgeon later observed, but I was still only in my mid-40s. So I do have some sympathy for rock star Liam Gallagher. Yesterday, it was revealed the 49-year-old has been told he needs two hip replacements. But because of the ‘stigma’ of having a condition associated with the elderly, he says he’d rather put up with the pain and ‘be in a wheelchair with Debbie [his partner] pushing me around’ than go under the knife. 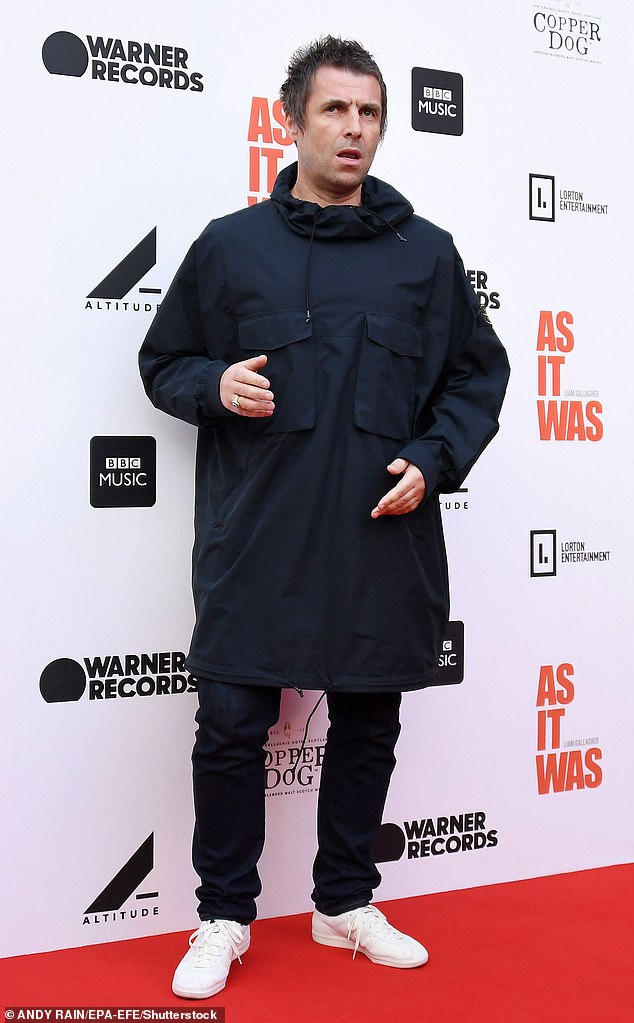 Liam Gallagher, 49, (pictured) has been told that he needs two hip replacements. But because of the ‘stigma’ of having a condition associated with the elderly, he says he’d rather put up with the pain and ‘be in a wheelchair with Debbie [his partner] pushing me around’

I suspect for many of Liam’s generation, just reading about his diagnosis will have made them feel ancient. Certainly, in my experience, your reaction on being told you will need a hip replacement is: ‘Oh my goodness I’m old.’ Though unlike Liam, who told music magazine Mojo ‘My hips are f*****’, I might not have expressed it in quite such colourful language.

After all, according to the NHS, 94 per cent of hip replacement recipients are over 50, with 52 per cent over 70. But the Oasis star – who is three months older than me – should count himself lucky. I was only 38 when a doctor told me there was significant ‘wear and tear’ on my right hip and that I’d almost certainly need a replacement before I turned 50.

The diagnosis came a couple of years after I’d first noticed stabbing pains deep in my hip when I sat on the sofa for long periods. I realised my right knee no longer rotated outwards properly either, making sitting cross-legged or swimming breast stroke increasingly difficult, then impossible.

Osteoarthritis — where cartilage on your bones breaks down — was eventually identified during a scan. As I’d not been in a serious accident, and wasn’t obese or into extreme exercise — all risk factors — it seemed to be down to genes and bad luck.

My mother and grandmother both had hip replacements – but they’d been in their 60s and 70s respectively.

Like Liam, I wanted to battle it out for as long as possible. Surgery was surely just for geriatrics. But bit by bit my world closed in.

Liam says he’s had to give up his daily runs on Hampstead Heath. My lack of flexibility prevented me riding my bike, and I had to stop any sort of running after a light jog left me unable to walk for days.

Clare Godwin (pictured) says she understands Liam’s reluctance. But she had a hip replacement in her 40s and is now living an age-appropriate lifestyle

I started waking in the night in pain – Liam says he takes herbal sleeping tablets. I could no longer stretch my right leg out flat so could only sleep on my side. And without going into detail, it’s also fair to say an arthritic hip never enhanced anyone’s love life.

By the time I got to my mid-40s the situation was increasingly untenable, but still I put off a hip replacement.

Then I was offered the chance to take part in a surgical trial for a new type of hip resurfacing. While this involves removing less bone than a replacement, you still end up with implants and there’s a similar recovery time. I was lucky to be able to have surgery in November 2020.

Now, I’m once again living an age-appropriate lifestyle. Yoga, breast-stroke swims, long walks, bike rides, running – I can do them all (the nature of resurfacing means some activities I do aren’t advisable with a full replacement). I’m even considering a sprint triathlon in the summer.

Surgery has transformed my life. So go on, Liam. Put your prejudices aside. In the words of Oasis, you don’t ‘Live Forever’.