Home » Lifestyle » Lily Collins’ 2019 Met Gala Makeup & Hair Look Was So Good, I Copied It For Myself

Lily Collins’ 2019 Met Gala Makeup & Hair Look Was So Good, I Copied It For Myself

On the heels of Extremely Wicked, Shockingly Evil and Vile‘s debut, actress Lily Collins stepped out at the Met Gala in a look that brought similar retro vibes from her character to real life. Admittedly, while everyone watched the wicked, evil, and vile acts of Ted Bundy in the Netflix film (or lack thereof), I also focused on the fashion worn by Collins, who plays Bundy’s girlfriend, Elizabeth Kloepfer. Dressed in the best of the ’70s (two pieces, bell sleeves, bouffants, and all), the starlet had me craving much more throwback beauty inspiration far before the credits rolled. Then, Lily Collins’ 2019 Met Gala makeup and hair look fulfilled my longing for vintage-meets-retro beauty on such a deep level. At that point, I had no choice but to copy the look for myself.

ICYMI, this year’s annual Met Gala theme was “Camp: Notes on Fashion.” While the name might be a tad confusing — it’s natural for your mind to automatically think of campfires and sleeping bags — the theme actually refers to "camp fashion," which can be humorous, ironic, or extreme. Think anything over-the-top, exaggerated, or even "so bad, it’s good."

To pay homage to this year’s theme, Collins showed up in a bouffant teased to the heavens and embellished with flowers, exaggerated false lashes, and an electric lavender eyeshadow applied up to the brow bone. The combination of more-makeup-meets-even-more-hair screamed "camp," but somehow felt totally wearable. I must say, though, Collins is a true beauty chameleon. Her red carpet transformations are like none other, so there was only one way to find out if the look could actually be pulled off in real life, and that was to try it for myself. 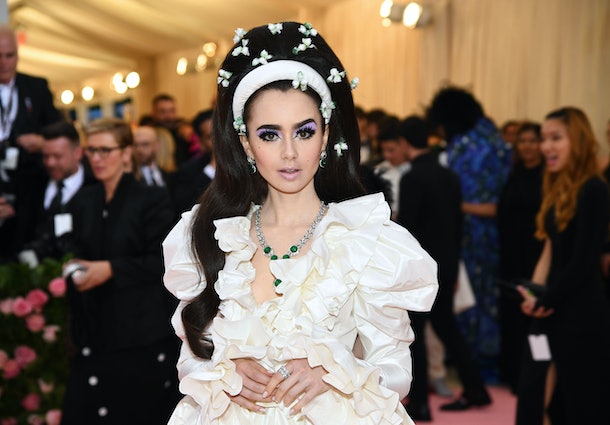 However, before I move on, I want to point out that, IMHO, imitation is the sincerest form of flattery. We all find inspiration somewhere. While I look to Collins for her chameleon-like beauty abilities, it seems she may have taken a cue from another beauty icon for her own inspiration. Can you guess who? In case you haven’t seen the photos of Priscilla Presley’s wedding to Elvis, the similarities are uncanny. The dark hair, the bold brows, the major cat eye, the wedding-like dress — the entire look has me "all shook up."

"The hair had a very Priscilla Presley/Sharon Tate vibe, so I played off of that with the makeup. I wanted it to feel retro but also elevated, beautiful and chic," said celebrity makeup artist Fiona Stiles, who created Collins’ vintage-inspired glam, via a press release. "A flat, matte pastel lilac on the eyes with wickedly dramatic liquid liner was a great backdrop for layer after layer of false lashes.”

So naturally, a girl stole Collins’ look SO fast: 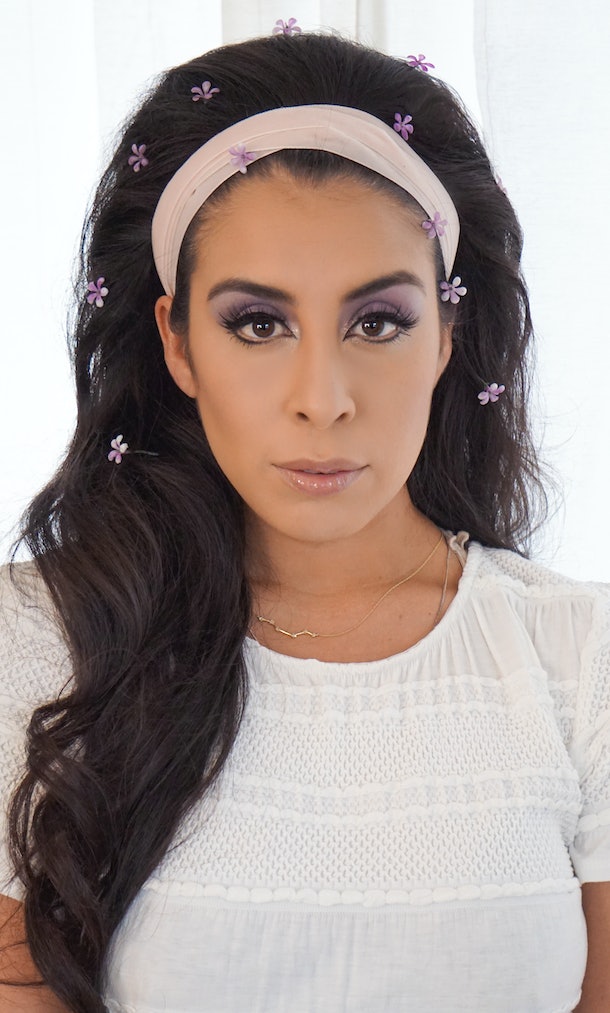 Collins’ makeup look is all about her porcelain skin and defined cheekbones, so to create this look, I applied my foundation as usual, but opted to contour only my cheekbones. Usually I do my forehead and temples, but to keep the integrity of the look, I pass on it this time. For Collins’ super-pigmented shadow look, Stiles opted to use the Lancôme Color Design 5 Pan Eyeshadow Palette in Lavender Grace ($50, Lancome). I decided to use the pastel purple shade in this Wet n Wild Fantasy Makers Paint Palette ($6, Target) to mimic the look. The most important part of pulling off the look is to extend the color all the way up to the brow bone. 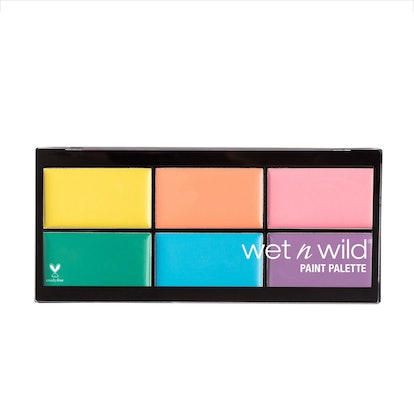 For added drama, Stiles crafted a super thick eyeliner wing on Collins, so I did the same thing with my The Balm SCHWING Black Liquid Eyeliner ($17, thebalm.com) and even extended the inner corners in a downward flick. Finally, I filled in the waterline with a nude (or you can use white) eyeliner pencil, and then, I used one in back to darken the lower lash line. This makes your eyes look bigger than they are — almost doll-like. I finished off the eye look with one (or more) strips of false lashes, specifically the soft, yet dramatic Tarte Tarteist PRO Cruelty-Free Lashes in Sassy ($12, tartecosmetics.com). 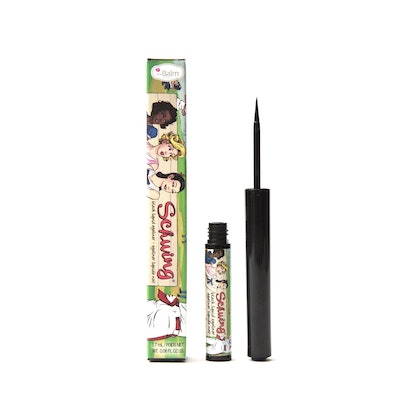 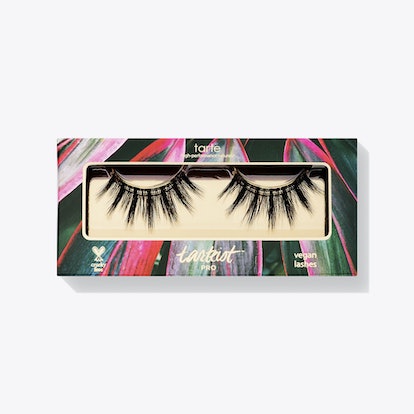 As for the incredibly teased hair, celebrity hairstylist Gregory Russell used a ton of product to give Collins her sky-high bouffant, including a $9 volumizing powder. I, on the other hand, cut a donut-bun insert in half and pinned it to the crown of my head to create the same effect. After a bit of teasing and some hairspray, my hair boasted a Priscilla-Presley lift.

If you’re doing it the old-fashioned way (no insert), use a teasing brush to backcomb your hair starting about three inches away from the root. Starting about three inches behind your hairline, tease a thin section that goes from ear to ear. Next, tease another section right behind the first before moving onto the next. Continue this until you have a substantial lift of hair at your crown. With the same comb, gently brush the top of your hair from the hairline to the back to smooth the top and hide the teasing. 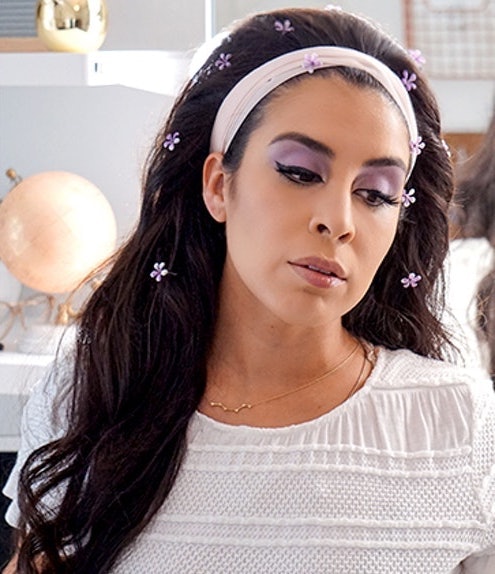 Now, all that was left was for me to add a headband and some faux flowers. When you’re wearing a headband or ribbon with a bouffant, it’s best to secure it close to the hairline and slide it straight back into place to avoid ruining the height you just created. As for the flowers, I bought a single bunch of faux blooms from a craft store, and I simply cut off each flower, leaving about an inch of stem, and stuck it directly into my ‘do. The stem acts as an anchor (plus, all that teasing helps keep it in place), but you can also use a bobby pin to secure it just to be safe. Finally, a shot of hairspray will act as a glue that keeps them in place all night long.

Surprisingly, after all the hair teasing, faux flowers, and layers of eyeshadow, this look still felt totally wearable. While it’s not your everyday makeup look to, say, go grocery shopping, I will say I’m dying to be invited to a formal gathering sometime soon so I can really have the opportunity to work it. I may not have made it to the legendary Met Gala, but that doesn’t mean I (or you) can’t have fun doing it up in the same way from time to time.