London customer goes viral after sharing their avocado on toast

Pricey £8.50 London lunch gets roasted online after unimpressed diner posts photo of the avocado on toast which looks like ‘chip shop mushy peas’

Most people who regularly eat out have come across a meal that is incredibly underwhelming – despite the price – at some point in their life, and one unlucky diner found that to be the case with a recent foodie fail.

One Reddit user eating out in central London decided to treat themselves to an avocado on toast that cost £8.50, but upon seeing the measly meal decided to share it to the forum for scrutiny.

The picture of the sad looking toasted snack revealed a green splatter of avocado on top of some bread that seemed hastily prepared.

The diner, who simply described the meal as being from ‘central London’ did not disclose where they bought it from – however social media users were left equally unimpressed by the presentation and the cost. 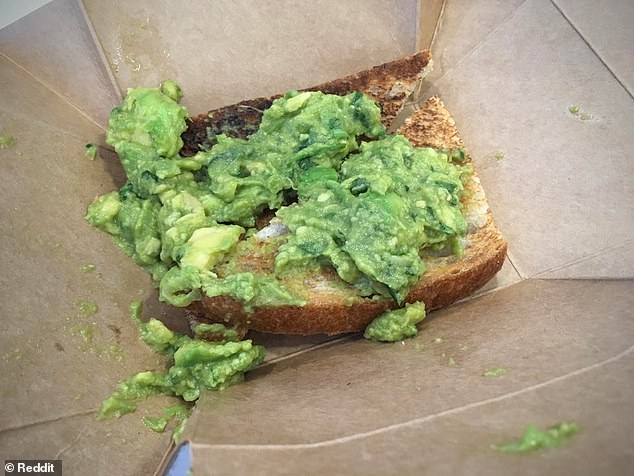 A reddit user shared their sad avocado on toast meal (pictured) that they bought for £8.50 at a central London restaurant

People reacting to the post were appalled, not only at the implied lack of care the restaurant had taken in preparing the meal, but also ridiculed the diner for spending so much on the dish.

‘Can’t complain with the description, nor really the actual product – but just wow £8.50 for that packet of planet destroying pap is unjustified to the extreme,’ said one person.

A fourth added: ‘Legit thought this was chip shop mushy peas on toast and now I’m getting all sorts of meal ideas.’

‘To me this meal is as symbolic of contempt as it gets,’ said another. ‘We got him to pay £8.50 for veg on toast, we’ve made it as badly as possible and now all laugh while he eats it.’

At least one was a little more sympathetic to the diner’s choice in food and reflected on the journey the avocado itself had to endure before becoming such a sad meal.

One said: ‘Think backwards on your supply chain people, from your doorstep back to harvest. That Avocado COST a lot more than £8.50.

‘And the waxed paper packaging and the delivery and “toast” and petrol for delivery and the added fee from a delivery app… just wow for a snack.’