Home » Lifestyle » Love in later life …and how to survive it

Love in later life …and how to survive it

Love in later life …and how to survive it – Sex, sleep, sounds from the 70s: LIZ HOGGARD shares the secrets of successful dating when the two of you are older

When M (AKA The Yorkshireman) and I became a couple in June 2020, I was 57 and he was 59. M had two kids from a 14-year marriage, and a stepdaughter. I’d had relationships lasting several years, but mostly lived alone, buoyed up by great friends, travel and a dynasty of cats.

We considered ourselves youthful – doing Pilates and keeping up with the latest music and films – but the fact remained that we’d already lived two-thirds of our allotted lifespans. The thing that marks out a later-life love affair isn’t, however, what most people think it is – namely, sex. Sex is great in your 60s; better, actually, as you’re more honest about your body. The markedly changed thing is my list of priorities – more specifically, the things that are no longer on that list.

Among the foremost is cohabitation. It’s an obsession for the young (understandable, too, if you’re thinking of starting a family) but in your 60s, living under the same roof is often not a viable proposition. I’d go as far as to say that a number of older people are constitutionally single, even in relationships. To quote the magnificent Nancy Dell’Olio, 61: ’I am a single person, with some interruptions. It’s a state of mind. I am in a relationship, but I consider myself a single person.’

The funny thing is, my relationship with M nearly didn’t happen. It took a global crisis to get us together. On our first date he found me too ‘serious’ and ‘grown-up’. On our second, he talked about meeting a promising woman from Brighton. Eventually he invited me for supper – to spell out that we were just friends. I recall an awkward night in his garden, eating a Covid supper (separate towels and cutlery) as M, ever the blunt Yorkshireman, explained why we weren’t romantically attracted to each other. 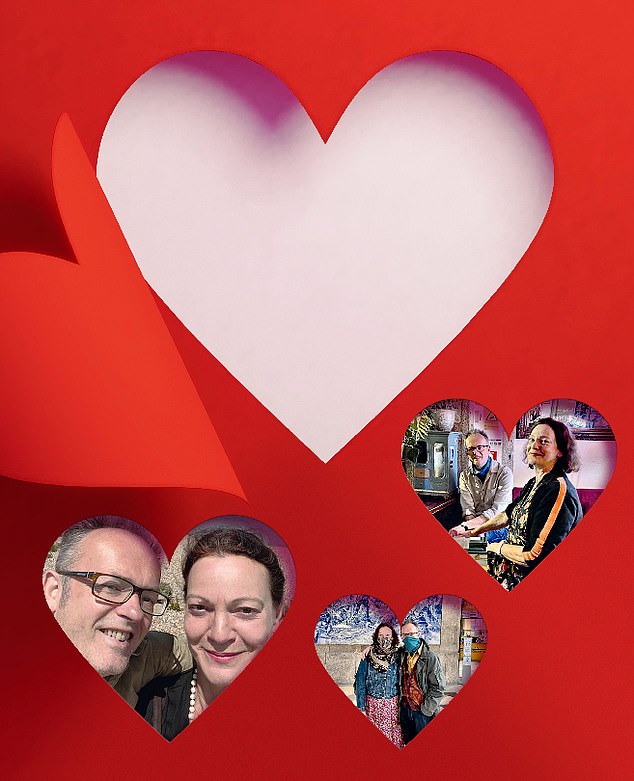 Liz, 60, and ‘The Yorkshireman’, 62, have been together since June 2020. Liz Hoggard met her partner when she was 57 and he was 59 in 2020. UK-based writer explains the essential truths she’s learnt dating in later life

Normally I would have bolted, but I knew the lockdown taxi fare home was going to be prohibitive so decided to make an evening of it. More wine was opened and I thought: ‘Oh well, we can be platonic friends: the Thelma and Louise of South London.’ Then, in an unlikely plot twist, we started kissing, making nonsense of the Covid precautions. I still got the taxi home, but something had shifted. Here are some of the essential truths I’ve learnt over the intervening two years…

REMEMBER, YOUR PARTNERE DID HAVE A LIFE BEFORE YOU

There will be constant reminders of the past: anniversaries, christenings, graduations… It’s OK to be a little jealous when your partner starts reminiscing about that family holiday in Mexico. But the important thing is they are here in the present with you.

IT DOESN’T MATTER WHAT YOU CALL IT

When I talk to friends who found love later in life, we agree that it doesn’t matter how you explain the basis for your relationship: love, friendship, companionship, friends with benefits… Defining these things seems important when you’re young – when you’re older what matters is that you have fun, understand each other’s back stories and miss one another when you’re apart.

DON’T EXPECT YOUR BEST FRIENDS TO BE ALL THAT INTERESTED

They have already lived through every detail of the ‘dating years’. Now they just want you to be happy. To that end, your greatest, most protective pals may not warm to the new love. Or they may have preferred you single, free to join them at a moment’s notice.

YOUR BEST FRIEND WILL, HOWEVER, MAKE A BETTER NURSE

They have already lived through every detail of the ‘dating years’. Now they just want you to be happy. To that end, your greatest, most protective pals may not warm to the new love. Or they may have preferred you single, free to join them at a moment’s notice.

YOU DON’T NEED TO BE A STEP-PARENT

You are Dad’s friend – hopefully a welcome guest, offering small gifts and advice on A-level choices – but nobody needs your opinion on household disputes. Avoid drawing curtains or switching on lights in a primadonna-ish way. Similarly, I’d advise no joint pets in the first five years (dogs are very demanding). It’s best to deal with parents/ siblings separately. Nobody can understand complex family dynamics in five minutes.

In September, M’s 20-year-old son came to live with him before university. Now he has his daughter, 17, with him. The last thing I want to do is encroach on their time together, so we live separately in the week and meet on Friday nights and Sundays. Texting keeps the communication going.

SOME THINGS ARE BEST LEFT SEPARATE

Our friendship groups don’t automatically hang out together. We certainly do not feel obliged to spend Christmas together. My bank account is my own business at this age (ditto my pension – or lack of it).

SEX ISN’T THE ISSUE – SLEEP IS

The interesting thing is that it’s sleep, not sex, that can divide. There will be snoring. Body temperature is another issue for mature couples. Wool is the game changer; it keeps you cool when it’s hot, and warm when it’s cold (I’m obsessed with Woolroom’s mattress toppers and duvets). To my great sadness, however, maturity does not make men like nighties. M would happily torch my collection of flattering slips – but how else is a 50-something woman supposed to go to bed with a new lover?

Break up your time together into smaller blocks: weekend breaks and nights away. I’m a glass-half-empty girl, panicking about passports and vaccine passes; M is happy to breeze in at the last minute with a man bag. So we’ve reached a compromise. He organises all outdoor activities. I book everything indoors (otherwise he would happily sleep under a hedge). Don’t talk politics or religion – and don’t get into cooking or home décor. It would be boring if everyone had the same taste.

If you don’t see each other during the week, you need a proper debrief, so it’s good to make Friday or Saturday night a ‘date fortress’ (to quote American psychologists John and Julie Gottman). But accept that some hobbies (football/theatre) will just never gel at this age.

Listening to Radio 2’s Sounds of the 70s can repair most arguments, particularly in the car. It’s your era, your music. There’s so much goodwill at this age and you both want it to work. Be the bigger person and phone first.

AND IF THE MUSIC ENDS BUT YOU HAVEN’T MADE UP?

Then it’s possible to stay friends – particularly if you’ve talked in advance about how you’ll both handle it. A split is entirely possible. There’s no shame in going back to being single – it’s a valid life choice.