The cost of Victoria’s suspended hotel quarantine has been revealed, with the Andrews government entering into 12-month contracts with hotels, transport services and health providers worth $377 million to run a program that is currently housing zero returned travellers.

The previously unreported figure, contained in the mid-year financial report tabled today in parliament, will increase pressure on the government to bring the program out of mothballs and re-open Victoria’s airports to international arrivals. 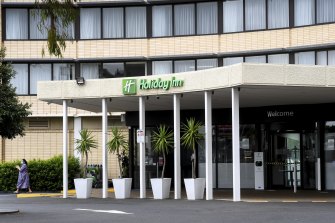 An outbreak at the Holiday Inn prompted a five-day, statewide lockdown.Credit:Penny Stephens

International passenger flights into Melbourne were suspended on 14 February in response to a COVID-19 outbreak out of the Melbourne Airport Holiday Inn which forced the state into a five-day lockdown.

Prior to the lockdown, the government committed to accepting 1310 returned travellers a week into its quarantine hotels. Instead, as of 11pm Thursday, there were two returned international travellers in quarantine.

There are 15 city hotels contracted to the quarantine program but of these, 10 are currently non-operational. Nearly all the guests inside the five hotels still providing quarantine services are air freight crew members.

The absence of returned travellers over the past month has starved the program of revenue intended to offset its costs. The state parliament passed legislation at the end of last year enabling COVID-19 Quarantine Victoria to charge adult returned travellers $3000, additional adults in a room $1000 and children three years and older $500 for a two-week stay.

If the program had run over the past four weeks to the government’s agreed capacity, this would have returned up to $15 million to state coffers. Under their contractual arrangements with the government, non-operational hotels receive a reduced rate for unoccupied rooms.

Opposition spokesman for Police and Community Safety David Southwick questioned why Victoria, unlike other states, appeared incapable of running a hotel quarantine program.

“Maybe it’s time for Daniel Andrews to pay NSW to run hotel quarantine for us and safely bring Victorians home.”

Sources with knowledge of the program told The Age that the quarantine budget is not sufficient to cover its costs and CQV would seek greater funding in the May Budget.

While up to 10,000 Victorians stranded overseas wait to come home, staff employed in the quarantine program are turning up to work at empty hotels to participate in emergency exercises, IT training, and other duties. They are working reduced shifts and are unable to seek employment elsewhere due to the nature of their contracts.

“It’s essential that CQV has ready trained staff and fit for purpose hotels available and on standby to allow quarantine accommodation to resume when required,” a CQV spokesperson said.

“While international flights are suspended the program has continued to support emergency accommodation for community members, quarantine for airline crew, the Frontline Worker Program and returned travellers who gain an exemption to enter Victoria for medical or compassionate reasons.”

The rebooted hotel quarantine program was established in December after Melbourne emerged from its deadly, second wave epidemic caused by breakouts from two city hotels.