Police have issued 202 fines to Victorians caught breaching COVID-19 restrictions in the past 24 hours, including to a man who told police he was trying to escape his housemate’s noisy bedroom antics and another who was visiting a friend to practice his DJ skills.

Of the total fined, 33 people were penalised for failing to wear a face covering, eight people were caught at vehicle checkpoints and 70 for breaching curfew in metropolitan Melbourne. 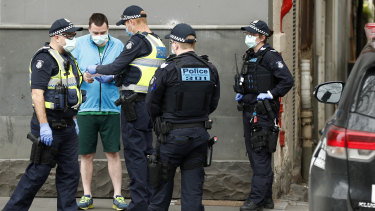 A man is issued a fine on August 9, in Melbourne.Credit:Darrian Traynor

In one instance, police said they found a man sitting in his car at a Maribyrnong car park, more than five kilometres from his home, about 7.30pm on Sunday.

When asked for his reason to be there, he told police his housemate’s intimate partner was over and the couple was being "too loud" in the bedroom so he left the house to get peace and quiet.

Police also attended a property in Melbourne overnight where they located a man who was away from his home. He said he was there to practice his DJ skills.

Both were fined $1652 for breaching the Chief Health Officer's orders.

In the past 24 hours, police checked 17,955 cars at vehicle checkpoints and conducted 4529 spot checks on people at homes, businesses and public places.

Other examples of those fined in the past 24 hours included:

Stage four restrictions are in place for people living in metropolitan Melbourne. Under the restrictions, a curfew is being enforced between 8pm and 5am. 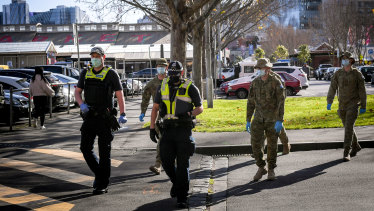 Victoria has recorded 331 new cases of COVID-19 in the past 24 hours and 19 further deaths, bringing the state's death toll to 246.

Fourteen of the 19 deaths are linked to aged care outbreaks.

There 650 Victorians in hospital, including 47 in intensive care.