Kellie Gerardi is shooting for the stars.

The researcher, author and social media influencer recently learned she will be heading to space on a flight with Virgin Galactic.

Though she’s not a professional astronaut engineer, the 32-year-old civilian space enthusiast is heavily involved in commercial space travel. To her, the new Space Race is about more than getting billionaires like Virgin Galactic’s Sir Richard Branson, Blue Origin’s Jeff Bezos or SpaceX’s Elon Musk up above the atmosphere.

“I’m so grateful for Richard Branson’s vision to democratize access to space,” she said of the billionaire, who is said to be shooting off in a rocket himself Sunday, July 11. “[Humanity] is not just going to be sending engineers to space; we’re going to be sending poets and journalists and communicators and artists and athletes. This is a watershed moment for more people to experience that.”

Just a sincere thank you for being here. The adventure is only beginning! ❤️

The three companies, she added, “sprung into action to disrupt the old way of doing business, with an eye toward agility and innovation, and are dramatically lowering costs.”

Gerardi will be taking what’s called a suborbital space flight, which can cost hundreds of thousands of dollars. Her seat is being funded by her employer, the International Institute for Astronautical Sciences (IIAS). “You go up, you enjoy five minutes of microgravity, and you come right back down,” she explained. The whole trip takes about two hours, and she cannot reveal when it will take place.

When she blasts off, Gerardi will be wearing a biomonitoring suit called Astroskin under her gear to monitor how the body reacts to the journey. “This will be the first time we’re collecting data where someone’s wearing it during launch, re-entry and landing,” she explained. She will also be performing an experiment on how fluids react to a confined environment in microgravity — and the results could affect how medicine in syringes is administered in space.

It seems that Gerardi’s interest in space was written in the stars. “I grew up in Jupiter,” she said, with a laugh, of the Florida town  less than two hours from  NASA launchpads. “My window framed this stretch of sky over Cape Canaveral, and from there I saw so many space shuttle flights. It didn’t occur to me at that time that I could be part of it.”

For college, Gerardi headed to New York City, where she first attended Barnard, and then graduated from NYU’s Tisch School of the Arts in 2011 with a degree in film. “I thought that when I graduated I was going to go work for NatGeo or the Science Channel,” she said. “Then I realized the entertainment industry wasn’t for me.”

Instead, she decided to pursue something more adventurous.

She started out working coat check at the Manhattan headquarters of the Explorers Club, a society dedicated to discoveries of land, sea and air. (Now she’s on the club’s board of directors.) That’s where she met her mentors, Richard and Laetitia Garriott de Cayeux. “Richard was a private astronaut and a civilian video-game developer who self-funded his mission to the International Space Station — he was one of the first [civilians] to do so,” said Gerardi.

She wanted to do the same. But “I felt like there was no way I could catch up through a natural NASA selection process,” Gerardi admitted of her astronaut dreams. “[Meeting Richard] was the breakthrough moment for me.”

After that, she worked in communications and business development for a rocket company. As a DC-based crew member and bioastronautics researcher with the IIAS, Gerardi has tested space­suits, evaluated aircrafts, studied biometrics and even flown in simulated micro- and zero-gravity conditions — all to help optimize the human experience in space.

Still, Gerardi admitted, not coming from a traditional science background has sometimes left her feeling self-conscious about her place in space.

“I have felt an enormous sense of imposter syndrome in the past,” she said. “I’m never going to be the stereotypical [professional astronaut] who travels to space, but I’m setting out to change that stereotype.”

Flying out of this world “is the single goal of my life,” said Gerardi. “Every decision that I’ve made — career, family  — in the last few years has been very explicitly oriented around making this goal happen.”

Her husband, Steven, is also up in the air: He works in aerospace and defense. At their wedding, astronaut Scott Kelly sent them a video toast from the International Space Station. “My daughter has seen all of these photos of Mommy in a spacesuit and she thinks that’s just what mommies do,” Gerardi said of 3-year-old ­Delta V. (the V is for Victoria). 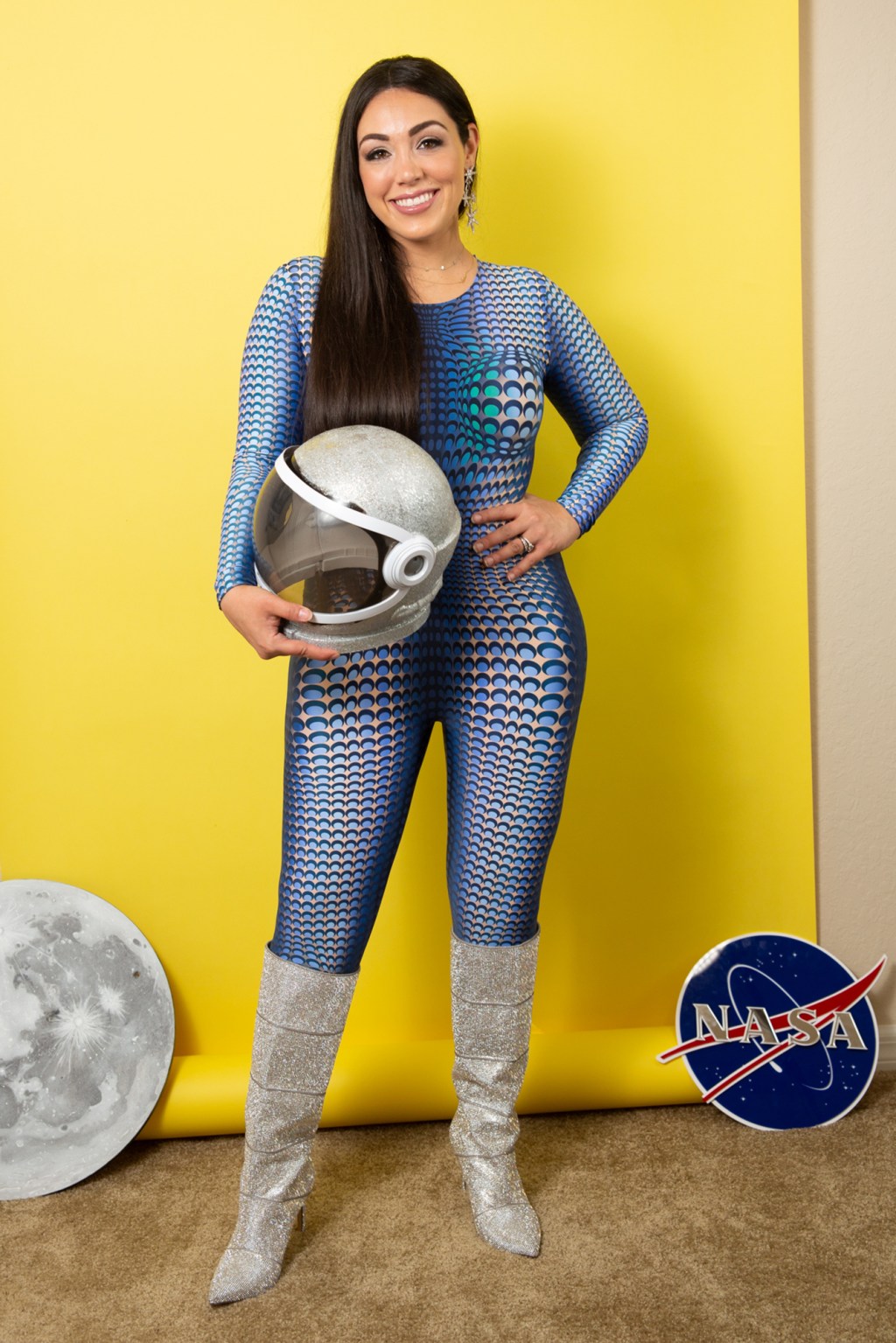 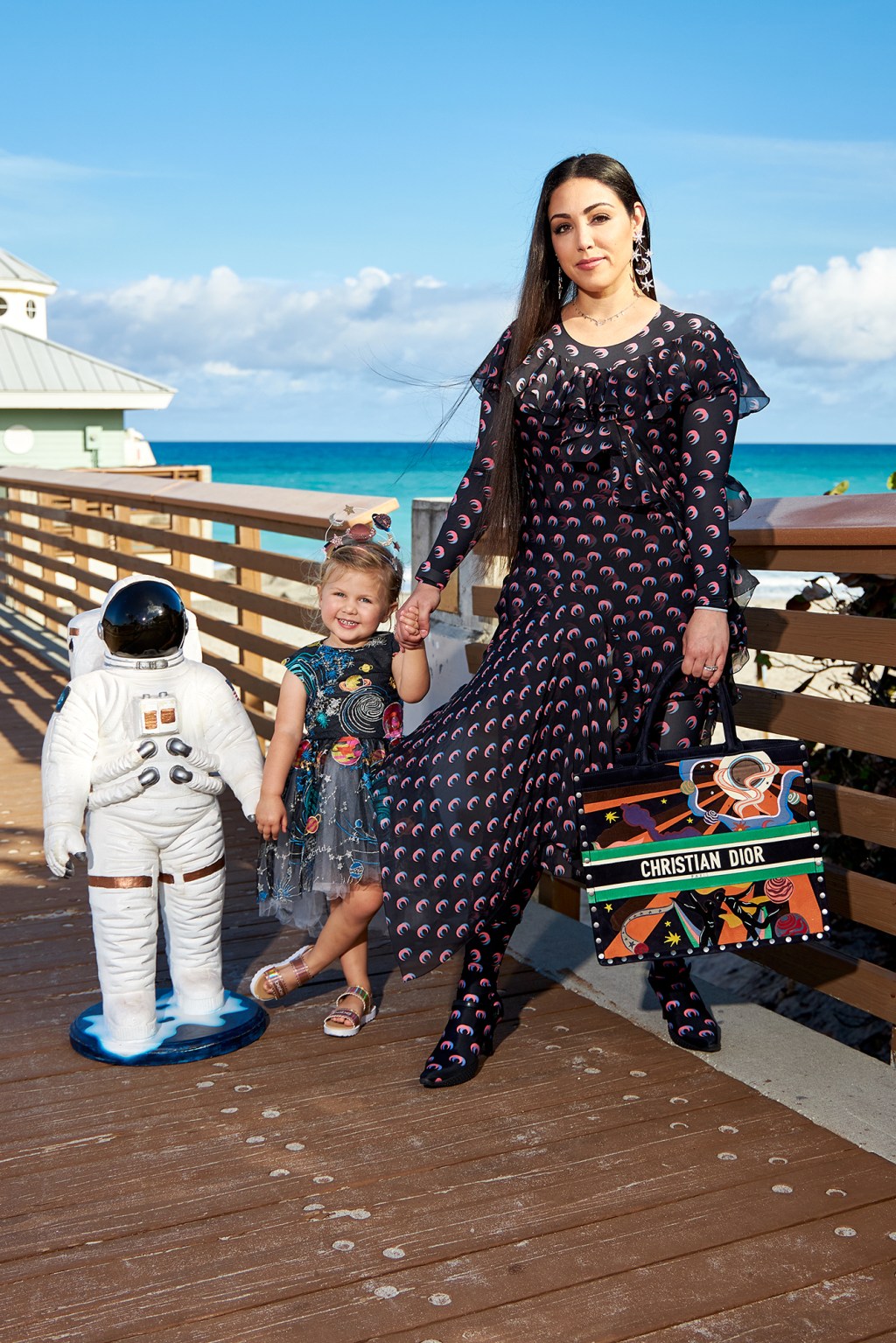 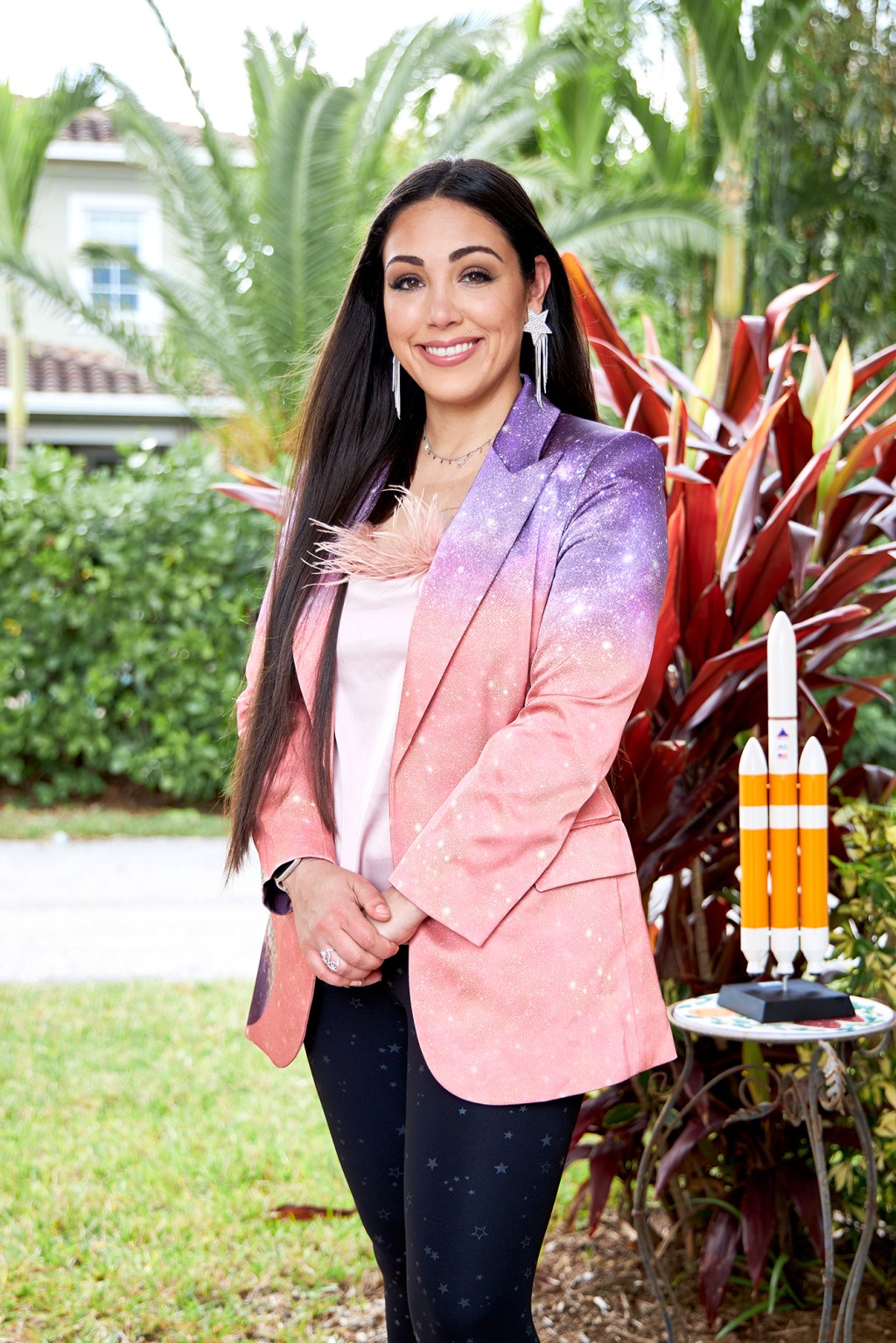 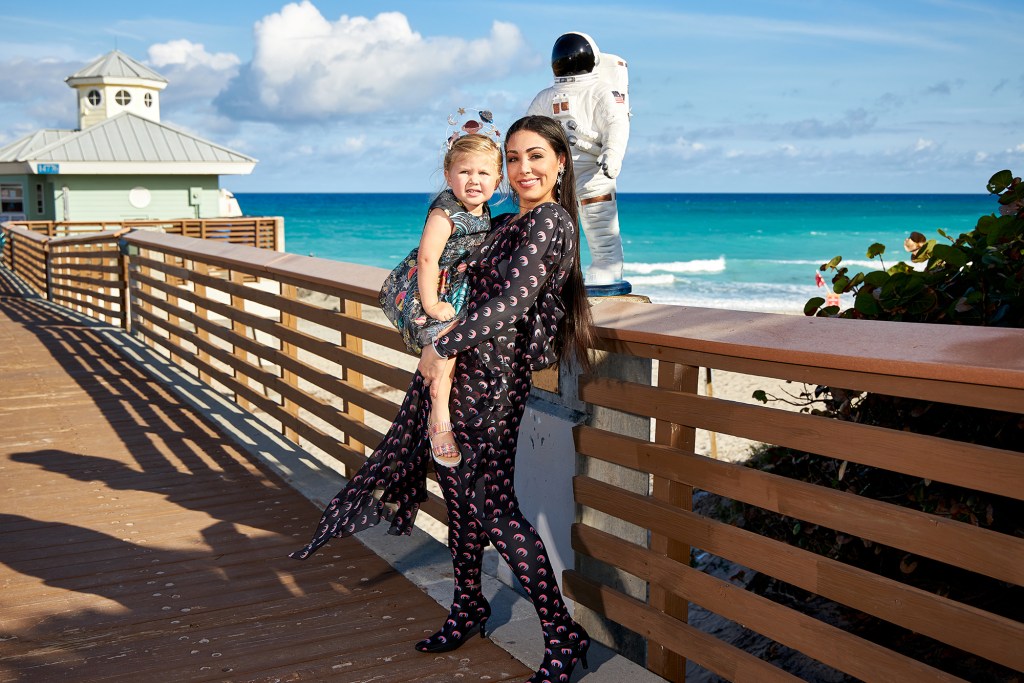 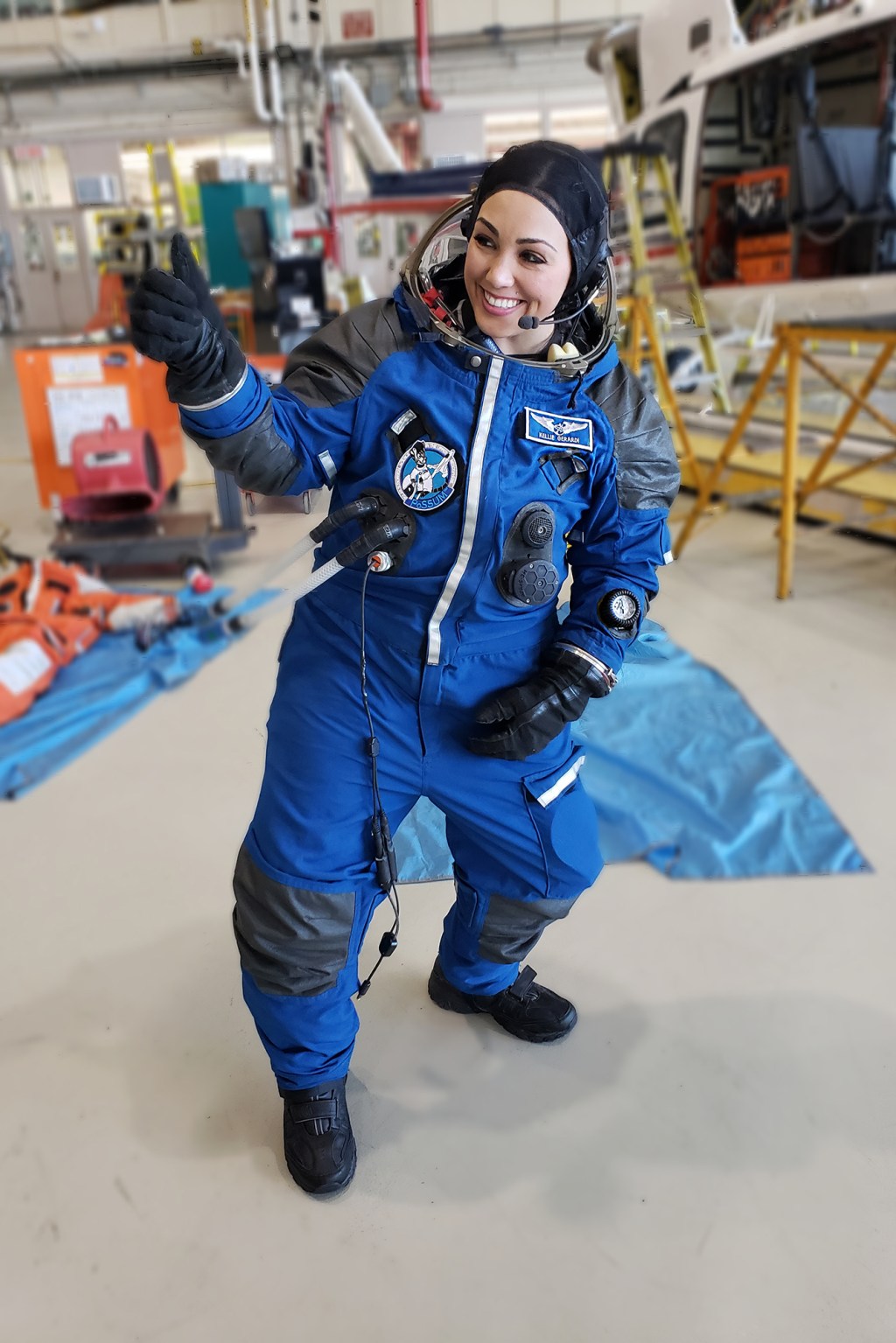