First Nations artist Cassie Leatham was startled when she heard her blue budgie – which she impulsively bought for $35 from an East Gippsland pet shop amid pandemic lockdowns – chirp in Taungurung language.

“Wominjeka daungwurrung Biik, Mr Beaky” (meaning ‘Welcome to Taungurung country my name is Mr Beaky’) is one phrase the bird squeaks. “Ngun Godjin” (thank you) is another. A third is “Yanggurdi Biik” (walkabout on country). 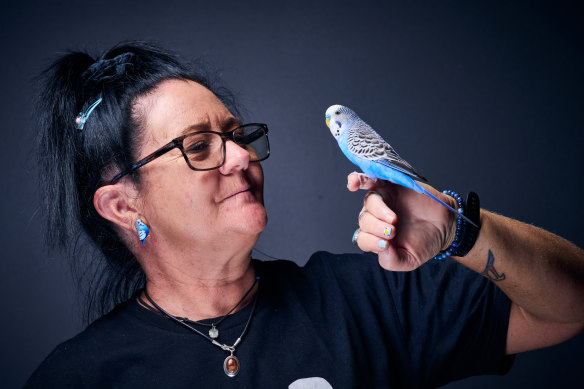 Cassie Leatham and her budgie Mr Beaky ahead of their storytelling sessions at the NGV Kids Summer Festival.Credit:Eugene Hyland/NGV

“I went ‘nah this is not right’,” Leatham said. She then figured the bird must’ve picked up a few words after overhearing her First Nations art lessons over Zoom.

“No one believed me, so I recorded it.”

After convincing others, Leatham and the talkative bird became a travelling roadshow, crisscrossing Victoria, stopping off at primary schools to teach hundreds of kids about First Nations languages, culture and identity via her children’s book An Important Message from Mr Beaky. As Leatham reads aloud, Mr Beaky joins in by saying phrases from the story. The pair will hold book readings for the NGV Kids Summer Festival at the Ian Potter Centre from January 17 to 19.

Unpacking Indigenous identity in her book was particularly important for Leatham, who saw parallels between Mr Beaky – coloured blue while other native budgerigars are yellow and green – and herself.

Leatham, who regularly explains to curious school children why she doesn’t have darker skin compared to other Indigenous Australians, said one of the phrases Mr Beaky squeaked, in English, was: “Just because I’m not green doesn’t mean I can’t be seen.”

“Mr Beaky is saying that just because he’s not green, doesn’t mean he’s not native to Australia,” she said.

“All my life I have struggled with my identity [and] always justifying myself. I get comments that I’m not black enough, or I’m not Aboriginal.” 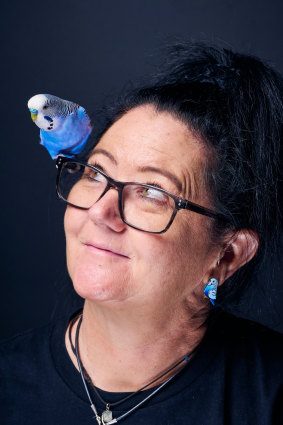 Leatham was raised in Stratford – 232 kilometres east of Melbourne – to a white mother and Indigenous father. She has connections with the Stolen Generations and now lives in Boisdale, close to the former homestead of Angus McMillan – a colonial pioneer who played a significant role in widespread 19th century Indigenous massacres in the area (a memorial nearby says McMillan “discovered” East Gippsland).

“It was bleeding out the black to become all English, all white,” Leatham says.

Leatham said Mr Beaky helped her gently explain to kids the dark history which led her to having fairer skin.

“[Mr Beaky] became this kind of barrier breakdown. Even the teachers were like ‘oh I didn’t know you were Aboriginal and you came in and started talking about Mr Beaky’. The penny started dropping for some,” Leatham said.

But she added Mr Beaky’s message was broader – helping children grappling with their own image feel comfortable in their own skin.

“It isn’t just about being a fair-skinned Aboriginal, it was also about kids struggling with mental health issues during COVID,” she said.

Leatham also hopes her visits with Mr Beaky to schools across Victoria were also helping keep Indigenous languages alive, and wants them to be taught more broadly.

“It breaks down barriers with non-Indigenous people,” Leatham said.

“[Indigenous language] was taken from our ancestors – as so much else was stolen – and to be able to revive it and put it back into the classroom, even though it’s through a little blue budgie, that’s what’s going to make a difference, but in a unique way.”

Cassie Leatham and Mr Beaky’s book reading at the NGV Kids Summer Festival is scheduled for January 17, 18 and 19 at the Ian Potter Centre. More information is available here.