The Duchess of Sussex, 38, returned to work yesterday for her first official public engagement since the birth of her son Archie Mountbatten-Windsor in May.

Arriving in London to launch a high street clothing range in aid of charity Smart Works, the former actress bestowed plenty of warm hugs to those she met, despite it contradicting royal protocol.

And experts have suggested that the duchess could be continuing Princess Diana’s legacy of comforting those she met, while also showing she is a ‘modern, successful woman’ in her own right. 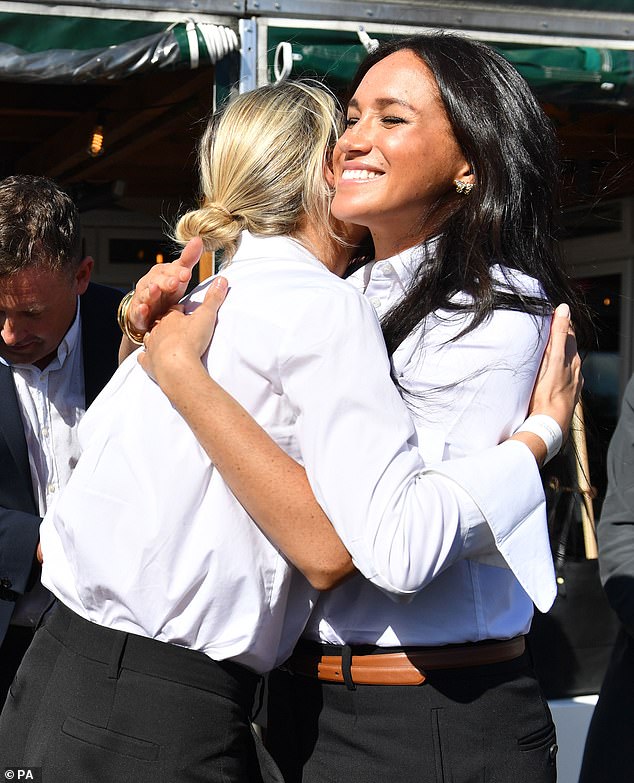 The Duchess of Sussex hugs designer Misha Nonoo at the launch of the Smart Works capsule collection at John Lewis in Oxford Street, London, yesterday. Experts have said this mirrors Diana’s body language

Former butler to Prince Charles, Grant Harrold, suggested Meghan is ‘showing that the British royal family is a modern 21st-century family’ and that she is ‘carrying on Diana’s tradition’ by hugging children and adults.

Meanwhile, the Duchess of Cambridge, 37, follows ‘royal etiquette to the letter’, offering only handshakes unless the other person – such as young children – goes in for a hug.

‘As a future Queen Kate has always followed royal etiquette to the letter and this would include using the handshake as the norm,’ says body language expert Judi James.

‘Being a royal wife has been pretty much Kate’s only “career” so she went into the “business” before she learned any other body language traits or rituals.

‘Meghan came into royal life as a woman who was successful and famous in her own right and so brought her way of doing things with her into that new life.’ 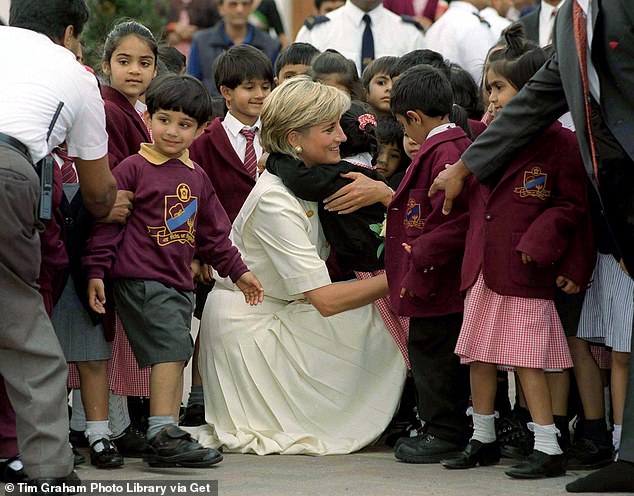 Diana, Princess Of Wales, crouching down to embrace one of the many pupils at The Swaminarayan School in London in 1997 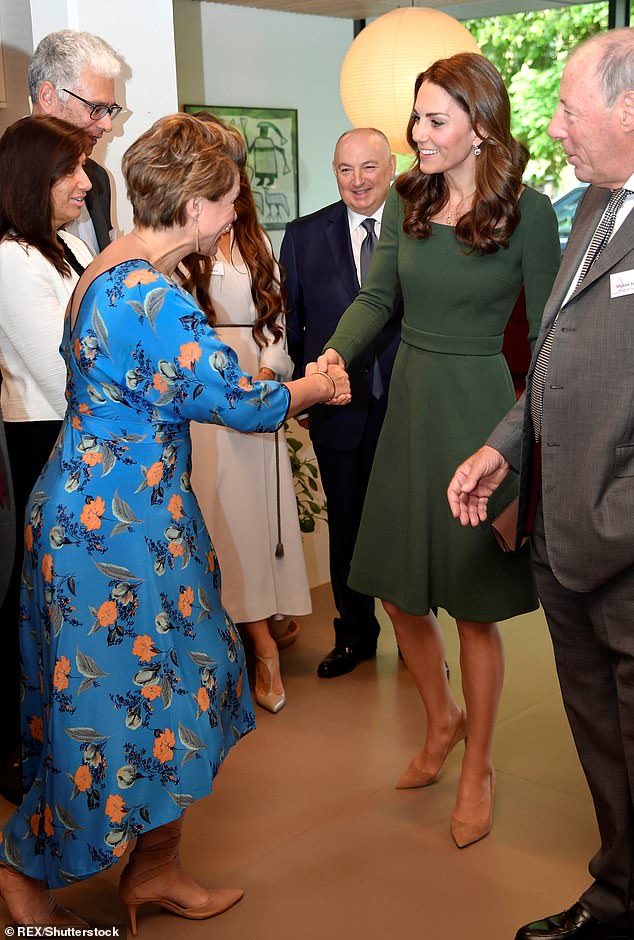 Duchess of Cambridge shakes hands with journalist Kate Silverton during her visit at the Anna Freud National Centre for Children and Families in London, in May 2019

Judi also claimed that mother-of-three Kate will be mirroring her partner Prince William, 37, and sticking to more formal traits which he inherited from his father and his grandparents as a future King.

‘Kate and William have always used very mirrored body language and that has meant they both stick to the more formal traits when it comes to meetings and greetings,’ she explained.

‘They are pretty “hands off” with one another in public and this style would have been inherited from William’s father and his grandparents.

‘Harry has always been more spontaneous and tactile and tended to inherit his traits from his mother Diana rather than his father. 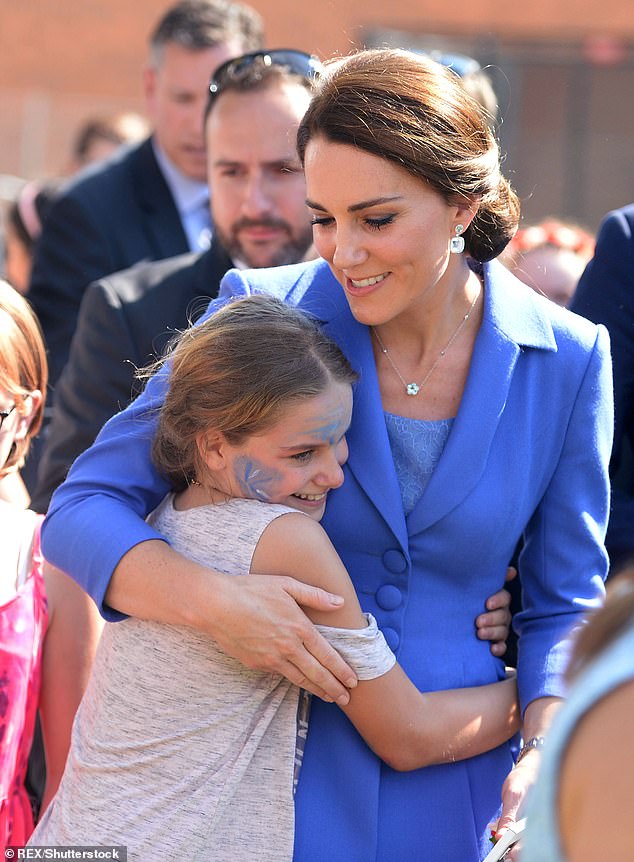 ‘So although Meghan brought the tendency to hug people with her from the US she found a kindred spirit in Harry, with both endorsing the other.’

The body language guru echoed etiquette expert William Hanson’s thoughts, that American-raised Meghan would see using a hug as a form of greeting as common practice.

‘Meghan, being American, will be used to greeting with a hug as a standard greeting as that seems to be the norm in the US,’ William said.

‘However some Americans can interpret this as coldness, whereas some Brits would interpret a hug from a near stranger as insincere.’ 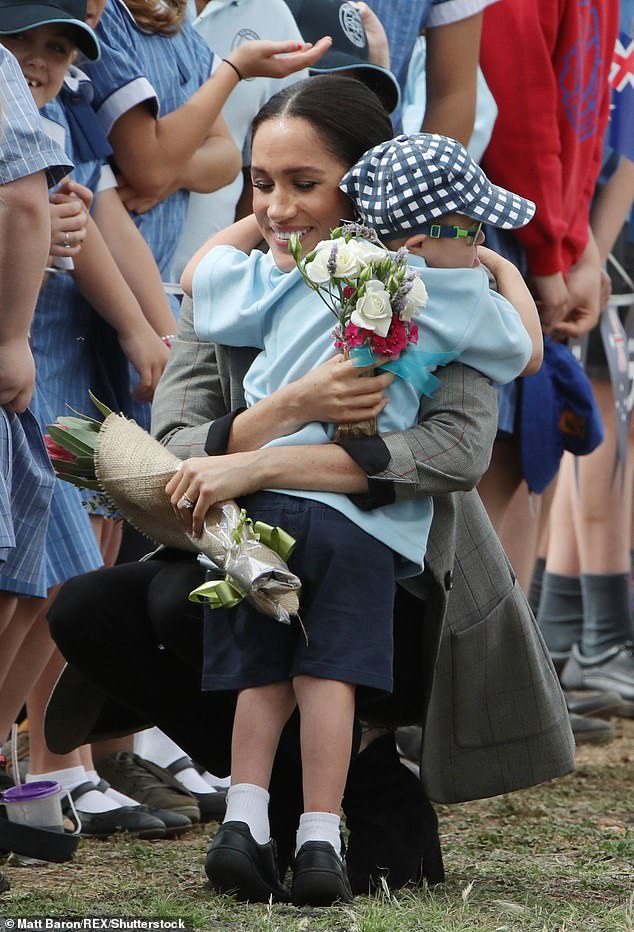 Duchess of Sussex hugs Luke Vincent, five, from Buninyong Public School, at Dubbo Airport during their tour of Australia in October 2018

Judi suggested that Kate might assume her more formal handshakes are an easier option for people she meets on royal visits, as some will eventually be expected to curtsy to her.

‘Meghan has created a new zone of comfort for people with her hugs, though,’ the body language expert added.

‘She is adept at using “announcement gestures” to subtly steer people through the process comfortably, raising her hands as she meets them in an intentional gesture and often touching or holding their arms to ensure the hug is comfortably choreographed. Her own confidence gives them confidence.’

Giving out hugs to members of the public is not something the royal family are encouraged to do on the whole.

The monarchy’s website says: ‘There are no obligatory codes of behaviour when meeting The Queen or a member of the Royal Family, but many people wish to observe the traditional forms.’ 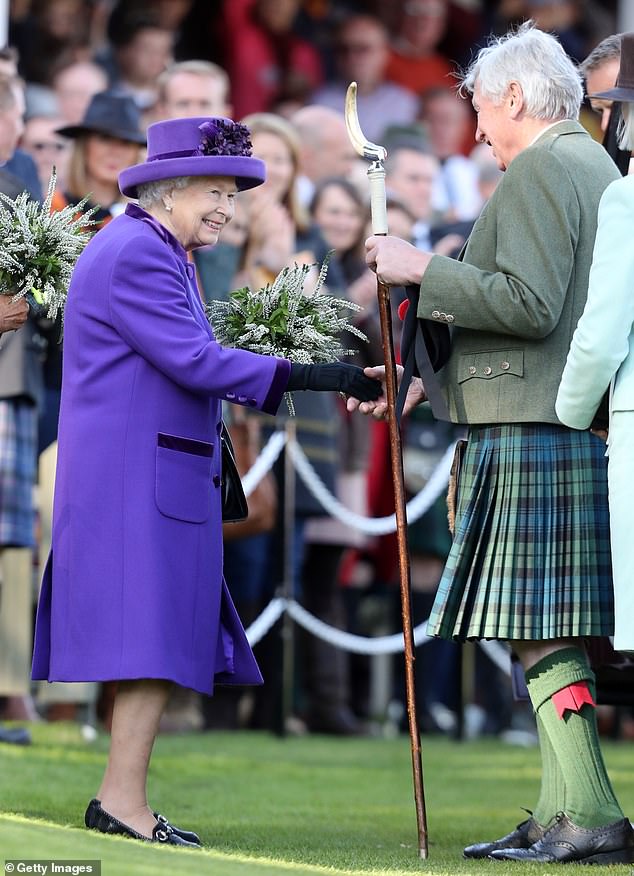 The Queen shaking hands with a man during the 2019 Braemar Highland Games at The Princess Royal and Duke of Fife Memorial Park on September 07, 2019 in Braemar, Scotland

By traditional forms they mean handshake, bow or courtesy.

Kate will often only give hugs if a child dives in for it, while the Queen keeps things formal with her trademark waving and very occasional handshake.

Yet former royal butler Grant, believes the Duchess of Cambridge has been seen hugging people more since Meghan’s introduction into the family business.

‘Royals are generally seen as the etiquette and protocol leaders, so this goes to show how etiquette is changing,’ according to Grant.

‘Not only by hugging replacing handshakes, but with all the social media we are now seeing from all the royals worldwide.’

He continued: ‘We often see more images of the Duchess of Cambridge shaking hands as she is doing more formal events being in line to becoming a future Queen.

‘Whereas we see the Duchess of Sussex hugging more often as her role has slightly less pressure in that she is not likely to become Queen so can be more relaxed.’