Men are more likely to think about FOOTBALL than sex

The most common sex myths have been debunked by a new poll.

In a survey of 1,000 people showed that men are more likely to think about football than getting jiggy.

So what do you make of the eye-opening results?

IllicitEncounters carried out a survey on hundreds of its members.

And the assumption that “all men think about is sex” was highlighted as the biggest myth.

Of the 1,000 blokes polled, just 8% said they think about bonking for the majority of the day.

Amusingly, it was revealed that chaps are more likely to be daydreaming about sport.

A whopping 64% of participants confessed they were more likely to think about football than sex. 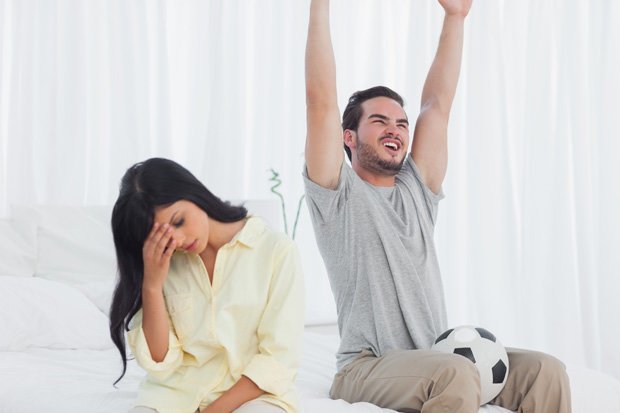 This wasn’t the only misconception to be outed by the study.

The second biggest myth is said to be “big hands or feet = big penis”.

Those polled seemed to be adamant that this is not the case, although they weren’t measured up to see if they were being honest.

Men also revealed that they don’t necessarily need sex to be “spontaneous” or “long lasting”.

1. I think about sex every seven seconds (I’m more likely to be thinking about football)

3. I play badly at sport if I have sex the previous night

6. I have never cheated on a partner

7. Good sex has to be spontaneous

9. I have a higher sex drive than my partner

10. You can burn a lot of calories having sex