Home » Lifestyle » ‘Miracles in our own backyards’: Rare urban ecosystems on the brink

‘Miracles in our own backyards’: Rare urban ecosystems on the brink

Almost half of Australia's national-listed threatened animals and a quarter of the plant species at risk are found in the largest towns and cities, and the threats are intensifying.

That's the findings of an analysis of known locations of at-risk forest species in towns with 10,000 people or more by the Australian Conservation Foundation. It excluded grassland or marine habitats and assessed habitat destruction only up to 2017. 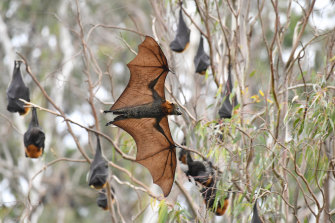 Grey-headed flying foxes at Melbourne’s Yarra Bend Park. The mammals are among the many threatened or endangered species in the midst of our biggest cities.Credit:Joe Armao

Sydney and Melbourne topped the list with the most threatened species, with 80 and 46, respectively. The Gold Coast-Tweed Heads region straddling the Queensland-NSW border and NSW's Central Coast were next at 39 for both regions, the ACF reported.

"We often think it’s the national parks, wilderness or regional areas where we need to take action, and the cities are where people live," Jess Abrahams, a nature campaigner at the ACF, said.

"But the cities are incredibly important for biodiversity, and that habitat is being destroyed at a rapid rate of knots," he said.

Sarah Bekessy, a professor with RMIT's Centre for Urban Research said agriculture and then urban sprawl have left less than 1 per cent of the original basalt grasslands near Melbourne and less than 3 per cent of Sydney's Cumberland plains habitat. 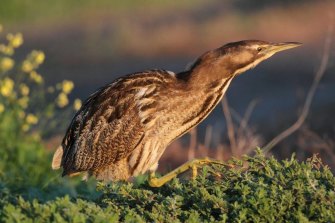 The shy Australasian bittern is found in 30 towns and cities and yet its numbers may be down to just the hundreds.

Among animals most impacted by urban habitat destruction were the red goshawk, the grey-headed flying fox and the koala – all on the ''vulnerable'' list.

Also at risk were the endangered Australasian bittern and the critically endangered regent honeyeater.

Plants facing extinction include the critically endangered Frankston spider orchid, confined to a small area on Victoria’s Mornington Peninsula; and the spiked rice flower, with one of the few known populations of this plant found at the Camden Golf Course in Sydney's south-west.

Malcolm Fisher, a member of ACF's Sydney's Northern Beaches group, said many species in his region were "just hanging on".

This region includes Manly Dam which is home to the eastern pygmy possums, powerful owls and the climbing galaxias fish that can scale steep surfaces.

Andrew Lo from UNSW goes in search of a climbing galaxias fish at Manly Dam.Credit:Ben Ruston

"It's so close to the heart of the city," Mr Fisher said. "A lot of the miracles are in our backyards but if you ask anyone about them they know nothing about it."

The ACF report comes as the Morrison government considers the review of the Environment Protection and Biodiversity Conservation Act.

Just five species are listed on the national Register of Critical Habitat, when as many as 2000 should be, Mr Abrahams said.

Professor Bekessy called for a ban on so-called offsets in urban areas that preserve distant ecosystems in exchange for destroying endangered habitat. Instead, developers should be required to improve remaining green space as a form of "on-setting". 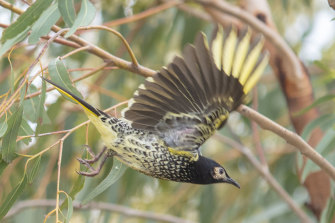 The regent honeyeater has lost 10,000 hectares of its habitat since 2000, ACF says. As many as 16 towns and cities play host to this critically endangered bird.Credit:Campbell Paine

“It’s completely within our control to turn it around," she said. "It shows people they can be part of the solution, not just the problem."

The ACF on Wednesday will also launch a website allowing people to identify threatened species in their region by postcode.