Next year will mark three decades since the present site of Melbourne's Malthouse Theatre – the former Carlton and United Breweries complex in Southbank – was transformed into a theatre venue.

The iconic building first hosted Playbox (focused on Australian playwrights under Aubrey Mellor) before being reimagined by Michael Kantor and Stephen Armstrong in 2004 as the outward-looking, progressive and experimental company it remains today. 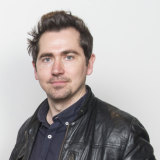 In a difficult funding environment, the 2020 Malthouse season isn't the biggest of birthday bashes, though the program should excite discerning theatregoers.

Some works return to life: a new generation will cackle at Ridiculusmus' brilliant two-man version of The Importance of Being Earnest, last seen in 2006; and Patricia Cornelius' Do Not Go Gentle… – a play about ageing that invokes Scott's fatal expedition into the Antarctic, first staged at fortyfivedownstairs in 2010 – will finally receive a main stage production starring Shane Bourne.

Important new Australian plays include John Harvey's The Return, which unearths the history of Aboriginal remains collected by powerful institutions (mostly museums and universities) around the world, and the struggle to repatriate them.

And those who saw Little Ones Theatre's recent adaptation of Christos Tsiolkas stories, Merciless Gods, will be thrilled by the prospect of the same team bringing his gritty debut novel Loaded to the stage for Malthouse.

Ra Chapman's first main stage play, K-Box, confects surreal comedy from cross-cultural adoption and Korean pop music (and is set to feature a real K-pop star, yet to be announced).

International performances round things out. Sure to be a highlight is Macbeth (This Ignorant Present): New York's ArKtype restages the Scottish play using two actors – with the formidable Zahra Newman taking on Lady Macbeth – and a child.

Is This A Room offers critically acclaimed verbatim theatre from the US: the unedited real-life transcript of an FBI interview with jailed intelligence agent Reality Winner, it builds up a Pinter-like scenario that raises crucial questions about whistle-blowers and law enforcement.

And Grey Arias will see feminist comedian Adrienne Truscott team with drag diva Le Gateau Chocolat. The duo will walk a stage littered with eggshells, mixing comedy and song in an exploration of identity politics and trap-springing political correctness.

With so many smaller-scale offerings, though, is the Malthouse feeling the pinch, funding-wise?

Artistic director Matt Lutton concedes the situation is difficult. "There's a real sense of lack of interest from government in artistic progression, and in how telling stories in Australia is of deep value," he says.

"They don't want to reduce investment, but they're constantly reshaping the same pie. And one of the killers is that there's no indexation, so when funding stays static, in practical terms for a theatre company like the Malthouse, it's effectively reduced over time."

It doesn't help that the current partnership between the Malthouse and Monash University is set to end this year.

"The funding situation means we have to be more resourceful – super resourceful," Lutton admits, "and inventive in how we present work."

There’s a real sense of lack of interest from government in artistic progression, and in how telling stories in Australia is of deep value.

It also means fewer artists are employed, and the death of curated seasons of indie theatre that briefly ran alongside main stage fare. The Helium and NEON programs at the Malthouse and MTC are now a distant memory, both killed by the cost.

"Not having an independent season in the Tower [the small black box theatre at the Malthouse] is a resource thing," Lutton concedes. "We can't do it without cutting two shows from the main stage program every year. If we do that, we lose overall attendance, which impacts box office – so it's a delicate balance."

Yet Lutton feels a keen obligation to support the indie sector at a time of funding uncertainty. "When government reduces support to independent theatre directly," he says, "we have a responsibility to open our doors further."

Though you can't escape the sense of a company struggling to meet its core responsibilities under significant financial constraints, Lutton does remain cautiously optimistic about the future.

"We're always trying to do more with less – it's the Malthouse way," he grins.